From New Zealand to the world: Coffin Clubs are challenging society's perception of mortality | Courtesy of Loading Docs

For most of us, death isn’t a pleasant prospect to think about. But a group of senior citizens in New Zealand are proving that life’s finality doesn’t have to be so morbid. These pensioners and semi-retired folk have been coming together in community Coffin Clubs to celebrate life and death, one custom-made casket at a time.

The original Kiwi Coffin Club was established in Rotorua by former hospice nurse and midwife Katie Williams. Within just over a decade, the initiative has transitioned from a small assembly of ex-carpenters, former builders and artsy creatives confined to Williams’ garage, to a series of clubs in New Zealand and abroad.

Williams’ club now has a following of more than 60 members who come together to order, build and decorate their own coffins as they also craft their own unique sense of community.

From New Zealand to the world: Coffin Clubs are challenging society’s perception of mortality | Courtesy of Loading Docs

The initiative is more than just a hands-on approach to giving death a symbolic middle finger. Members also spend time discussing their experiences with grief and loss, and they regularly meet for breakfast or afternoon tea as they celebrate the joys of life and find new ways to challenge the culture of death and funerals.

Auckland filmmaker Briar March was fascinated by the Kiwi Coffin Club when she first heard about the group. Her curiosity, coupled with her own uneasiness with mortality and aging, ultimately inspired her to learn more about the people behind this crafty pursuit.

Kate Williams was more than happy to share her story and wisdom, and in 2017, a short documentary was ready to shine a spotlight on the Coffin Club concept. 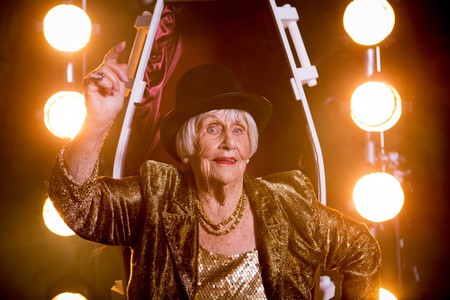 True to the colourfulness of its characters, the film — which was directed by March and produced by Kim Harrop for Loading Docs — takes the form of a fun, glitzy musical. Everyone featured in it is a Kiwi Coffin Club member and the oldest singer and dancer on the screens was 94 at the time of filming. As the show goes on, viewers are treated to a glimpse of the nifty creations these seniors have crafted for themselves; for many, these are just part of the furniture while they’re alive and kicking. 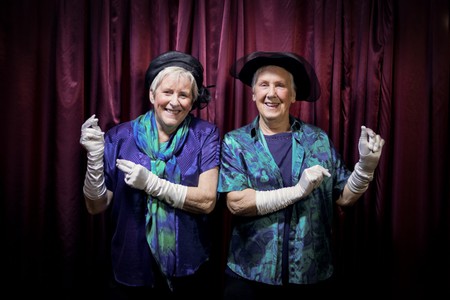 In the film Kiwi Coffin Club, members sing, dance and unveil their uniquely made caskets | Courtesy of Loading Docs

Among the various shining stars in the glittery showcase is founding member Jean McGaffin, who also had a background in stage work. The potential for reducing those hefty funeral costs was one of the main things 90-year-old McGaffin pointed to as a drawcard for joining; prices for a new casket in New Zealand can start at NZ$5000, whereas Coffin Club orders tend to be around NZ$200. 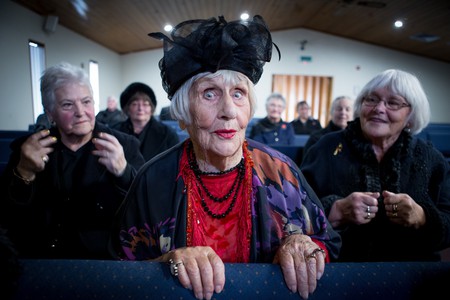 McGaffin also said that after the feature was released, there was a growing interest in these kinds of clubs — the film’s intention right from the outset. March wanted to not only capture the clever citizens that brought the initiative to life, but also to foster an interest among other communities who would like to explore new ways of challenging the grimness of death.

You can watch the Coffin Club documentary on the Loading Docs website and will find more information about New Zealand’s Coffin Clubs here.