France has escargot, and America has the iconic hot dog. In New Zealand, there can be no other iconic food favorite that intertwines tradition, culture and flavor than the Māori hangi. While hangi refers to the method of cooking the cult Kiwi classic, the term also includes the many sumptuous foods that are included in the cooking process. While many other Pacific nations have their own versions, including the Samoan umu, the hangi is unique to New Zealand’s Māori. 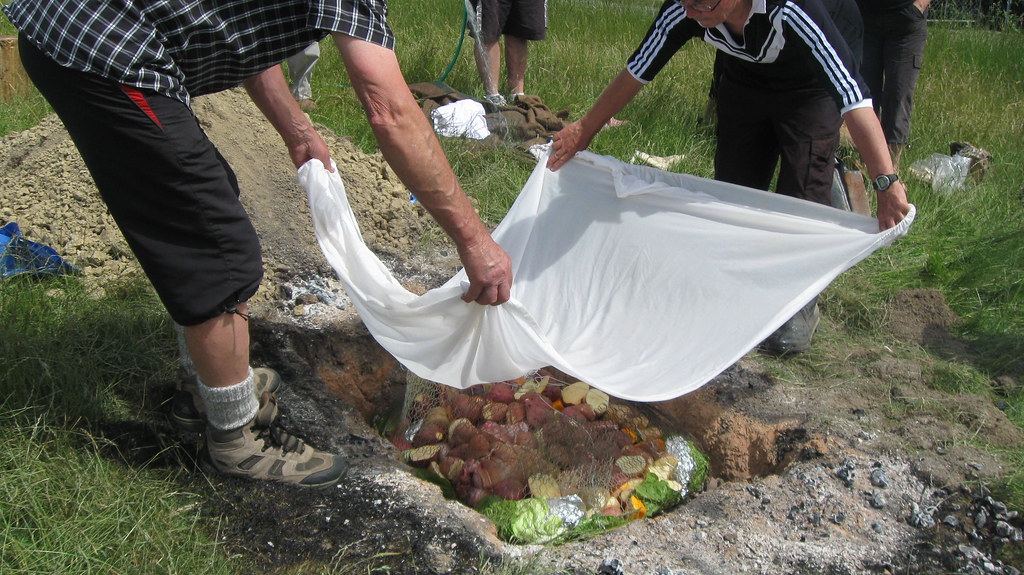 Laying down a hangi | © Sarah Stewart/Flickr

Hangi refers to the traditional method of cooking food using heated rocks buried in a pit oven. However, due to the vast landscape, varying climates and natural topography of New Zealand, hangi is done with some slight regional variations. On the East Cape of the North Island, manuka wood is mainly used to the heat the stones, due to the prevalence of manuka in the area. As such, East Coast hangi is often done with a hint of manuka that is infused into the rich meats and vegetables. Contrastingly, in Rotorua, in the central North Island, where geothermal activity is widespread, hot stones are not used at all. Traditionally, the local Ngati Whakauae tribe would place selected foods in flax baskets, and instead of burying these in grounded pits, they would put them directly into hot springs and geysers to cook within a matter of minutes.

A cross-section of the cooking process | © Beao/WikiCommons

The term hangi refers to not only the cooking method but also the food. Again, due to the vast landscape, ingredients used vary from region to region. In the lakes area of Rotorua and Taupo, trout and eel are often placed in hangi pits and geysers. On the East Cape where the agricultural industry thrives, pork, beef and mutton often fill their local hangi pits. Similarly, being so close to the coastline, East Coast tribes often include a variety of seafood from crayfish and paua to mussels and other shellfish. Travelling further to the bottom of the country and in the South Island, local tribes cook mutton birds in their hangi pits. As a local delicacy and predominantly found in the South, mutton birds and seals are what make the Ngai Tahu tribal hangi so unique.

In modern times, however, the arrival of the oven and other more efficient cooking methods have rendered this traditional cooking style near obsolete. Hangi is, however, still used on special occasions including birthdays, weddings and funerals.