Māori Culture: What is a Marae? 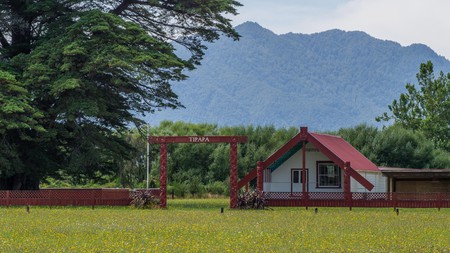 Unique to the Māori cultural experience is the marae, a communal and sacred meeting ground that provides everything from eating and sleeping space to religious and educational facilities.

In pre-colonial times, the marae was central to everyday life in Aotearoa (New Zealand). It was where tribal societies gathered to eat and sleep, all under the same roof. The notion of the nuclear family was non-existent, and Māori tikanga (lore) constituted a more communal lifestyle. While Western ideologies of the nuclear family emphasise independence, the Māori philosophy, and by extension the marae, is firmly rooted in the notion of interdependence. 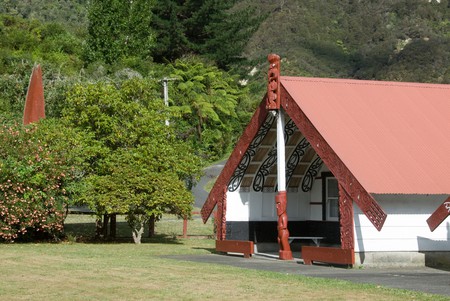 Koriniti Marae on the Whanganui River features a ‘kōruru’, carved to represent the face of the ancestor after which the marae is named | © Geoff Marshall / Alamy Stock Photo

The marae also provides a means of staying connected to spiritual ancestors. You will notice that each marae across the country is named after an ancestor of a tribal area. As such, the distinct architecture of the whare tipuna (ancestral house) is designed to embody the likeness of this ancestor.

At the front of the meeting house is the kōruru, carved to represent the face of the ancestor. The two long beams trailing down are the maihi and represent the arms, at the ends of which are the raparapa or fingers of the ancestor. Supporting the beams are the amo, or legs, holding up the entirety of the building. Finally, standing aloft at the top of the marae is the tekoteko, or statue, which represents the ancestor in all their revered likeness. 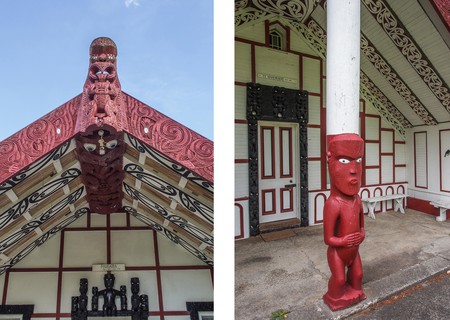 Left: The two long beams trailing down are the ‘maihi’ and represent the arms of the ancestor to which the marae is dedicated | © John Steele / Alamy Stock Photo

Yet, the exterior design of the marae is incomparable to its interior. Inside, tukutuku, or weaved panels and carvings, trace the entire history of the tribe and their ancestors through Māori symbology. Running along the roof is the tāhuhu, or spine of the ancestor, which holds together the whare tīpuna. Standing at the centre of the whare tīpuna is the poutokomanawa. This beam not only holds up the entire structure but represents the heart of the ancestor. By extension, it is also the heart of the tribe and the community and serves as a reminder that without a unified heartbeat there can be no community. For most marae around Aōtearoa, it is for these reasons they do not allow shoes to be worn in the whare tīpuna. It represents the body of the ancestors, and to wear shoes while entering their likeness would be to trample on their mana and mauri. 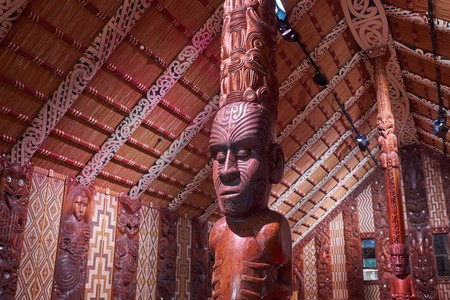 The arrival of Christianity in the 19th century began the abandonment and destruction of these thriving cultural centres. With the urban migration of Māori to the cities in the 1960s, Māori no longer live primarily on marae. Yet, while communal living has dwindled, the marae still play a significant role in modern Māori society, as with the Tongan mala’e and Samoan māla’e. Marae are still used for a multitude of cultural rituals, including birthdays and weddings, yet the most significant ritual is the tangihanga (funeral rite). For most New Zealand Māori, they will return to their marae for at least two days of grieving. During this time, the hosting tribe will have to look after thousands who have travelled to pay their respects. The visitors will be fed and provided with shelter and rest facilities. By the third day, it is left to the marae to bury the individual and ensure that all necessary protocols and rituals have been followed. Therefore, while marae are no longer the thriving hubs of yesteryear, they are still a vital element in preserving the cultural vitality of the Māori.