How To Travel New Zealand From Wellington 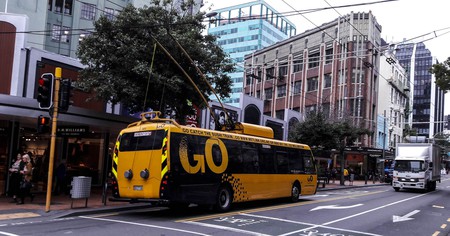 Wellington is perhaps New Zealand’s most eclectic and exciting city. It’s a great place to get a taste of New Zealand’s more contemporary culture when you first arrive in the country; less hectic than Auckland, with a lot of fantastic bars, restaurants and sights to see all within a very manageable radius.

When it is time to leave though, it is also a very handy place to get to almost anywhere else in the country. Read our guide to find out more.

Why start in Wellington?

Did we not mention how awesome Wellington is? Well, we’ll happily repeat ourselves. Wellington is an absolutely cracking little city. It is, we think, the perfect size for any city and should be have been used as a model for all the cities that came after. It’s so easy to navigate and explore due to its compact size, yet completely stuffed with excellent things to do and see. It’s a city made for those who have evolved an acute predilection towards food and drink – a way of life that, funnily enough, Hobbits are famous for – and has some truly fantastic bars, pop-up stalls and restaurants. Eating out in Wellington is one of those things in which you are constantly foiled from enjoying to the uppermost by the limitations of your own stomach. 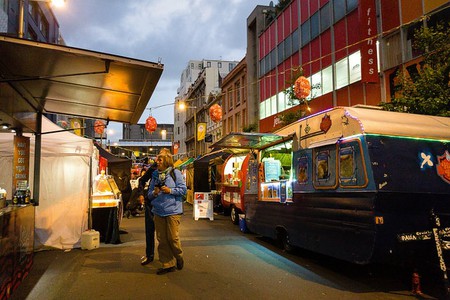 Geographically, it’s quite a savvy move to fly into Wellington as it means you are quite literally in the middle of the action. Located at the southern most tip of New Zealand, you’re a stones throw from the South Island, whilst north of the you the whole North island waits to be explored. 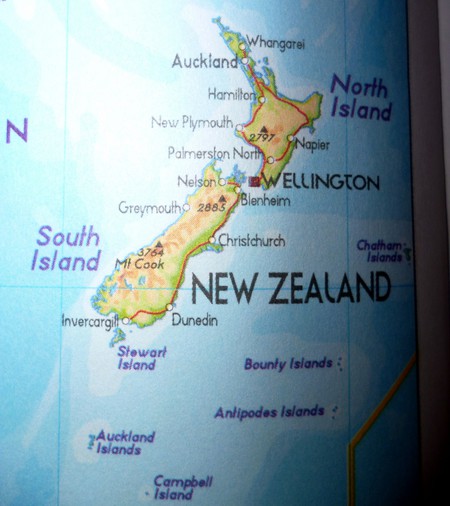 Catching a flight out of Wellington is always a bit of an adventure. If you’re not a great flyer then chances are you aren’t going to be a happy bunny leaving the ground at Wellington Airport. There are two things that Wellington Airport is particularly famous for; its unbelievable Lord of the Rings and Hobbit inspired sculptures that were designed and installed by the big old brain-boxes at Weta Workshop, and the wind that rips through the airstrips and results in some pretty exciting landings and takeoffs.

If you’re a fearless flyer and don’t mind a little turbulence, then flying out of Wellington is a great option to getting around the country. All the major cities and most big towns have domestic flights flying in and out of them, and Wellington is in a prime place to get you anywhere you like in no time at all. For instance, you can reach Whangarei – as far north as a domestic aircraft is capable of going and still landing – in a little over two hours. Or if you fancy heading down to the deep south to Invercargill it’ll take you basically the same amount of time. If you were to drive down there it’d take you 15 hours…

Whether you’re an overseas visitor or a born-and-bred New Zealander, trains are one of the best and easiest ways to travel between New Zealand’s three main cities, Auckland, Wellington and (with a little help from the Interislander ferry) Christchurch. Unlike domestic flights, the trains take you at ground level past superb scenery that can’t be seen by road, in civilised comfort that cramped and uncivilised long-distance buses can’t match. This makes them a superb intermediate when comparing the speed of air travel with the potential for seeing the natural sights of this fabulous country.

There are nowhere near as many rail journey options in New Zealand as you might find in, say, the United Kingdom, but the ones that are on offer are pretty special and make the journey from city to city far less painful. The Northen Explorer is the train that runs between the capital, Wellington, and the bustling metropolis of Auckland, whilst the Coastal Pacificruns from Picton to Christchurch – after you’ve hopped aboard the ferry in Wellington and arrived in Picton.

Wellington, being right on the coast of the southern tip of the North Island is, of course, the natural point at which you would expect to find a ferry linking the North and South Islands. And there is one too. This is the second most popular way of getting from island to island via the Cook Strait – the Cook Strait being the body of water between the North and South Island. There’s lots to see on the 3–3h30min journey along Wellington Harbour, Cook Strait, Marlborough Sounds, Queen Charlotte Sound and Picton, and vice versa. It’s typical of New Zealand that even using this form of public transport you’ll be wanting to keep reaching for your camera. 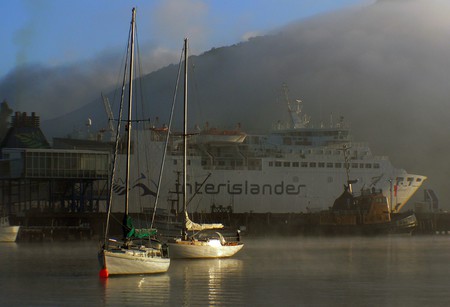 The Interislander on its way out of Picton | © Bernard Spragg.NZ / Flickr

Typically, five ferries a day make the trip across the strait, each journey taking – depending on the weather – about three hours. Two companies operate out of Wellington, Interislander and Bluebridge. There’s very little to choose between them. Interislander is bigger and more roomy, but Bluebridge offer free movies and the option to upgrade to a private cabin. 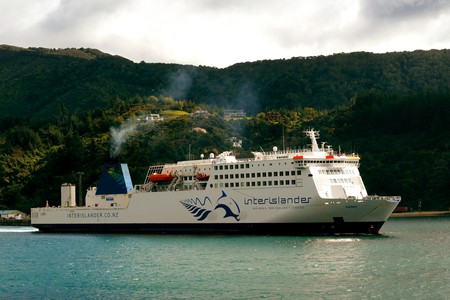 The ferry is the only option, if you have done the smart thing of buying or renting a campervan, if you want to hop from one island to the other.