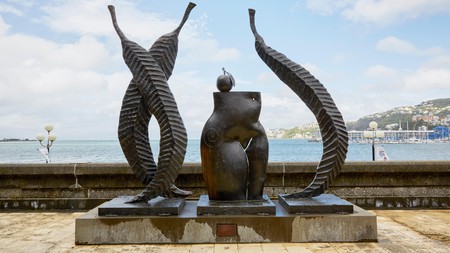 The Parliament building, Beehive building and statue of Richard John Seddon in the New Zealand capital are all major landmarks for tourists, but the city’s unique outdoor sculptures are helping to create a new identity – and sparking debate. Culture Trip reports. 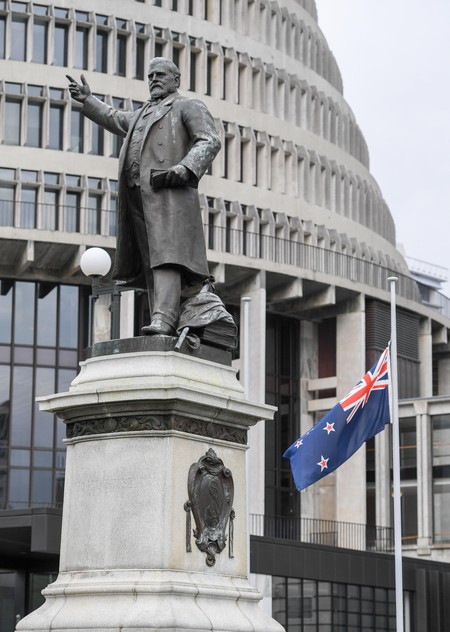 Take a walk along the reclaimed harbour area of Oriental Bay, through to Lambton Quay and further inland towards the Parliament buildings, and you’ll come across dozens of large sculptures inspired by nature, and stories of people who shaped the history of the city.

Wellington Council’s Tira Poutama City Arts and Events and Urban Design team says the city’s public art helps make it a stimulating and inviting place to be. “It is a key indicator of our city’s creativity, openness and quality of life. Public art performs an important social function by reflecting the city’s cultural diversity and heritage, and it shapes identity – creating a sense of belonging and improving the look and feel of our public places.”

Many of these sculptures have been made possible through donations to the Wellington Sculpture Trust, a voluntary charitable organisation established in 1982. The Trust has installed 27 works in the city that you can enjoy along three different walks through the city, the waterfront and the Central Business District. The Trust says it aims to commission public works of art and also “encourage and support sculptural practice in New Zealand.”

A 2019 addition to the city’s collection of public art is Quasi, a 5m-tall (16ft), three-dimensional hand-face sculpture by New Zealand artist Ronnie van Hout that he made using scans of his own body. It was brought in to uplift the Te Ngākau Civic Square, a popular public meeting space that has grown quiet since the central library, civic administration building and town hall were all closed for renovations for earthquake-proofing. 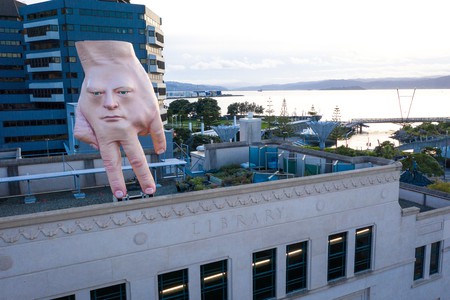 Volunteer guide Russell Harding, of Wellington Walks, says residents have a love-hate relationship with public art in the city, with Quasi – also referred to as the Hand – being particularly divisive. One person on social media went as far as describing the sculpture as “absolutely one of the creepiest things I’ve ever seen”. The city council welcomes the debate, saying it strengthens public participation discussions around public spaces. “Public art can also be critical, provocative and can generate discussion about our cities and how we live in them,” says a spokesperson.

Sculptures inspired by the sea

Given that New Zealand’s North and South islands sit in the ocean far from most of the rest of the world (Australia and the South Pacific countries being the exceptions), it’s no surprise that the sea is a major source of inspiration for artists here – and our relationship as humans with it is a common theme.

On the corner of Warring Taylor Street and Lambton Quay is a sculpture of five large shells painted in pastel colours with domestic tools and household items attached. Installed in 2002, Shells, by sculptor Jeff Thompson, was ahead of its time in reminding people of their carbon footprint and its impact on the ocean. It sits on what used to be the original Wellington foreshore, before the harbourside was reclaimed due to earthquakes. The sculpture, made from reinforced concrete, depicts a mussel, abalone, scallop, whelk and turret shell. According to the Wellington Sculpture Trust, “Each shape is covered in objects that have been individually cast, built into the moulding and poured as one with the shells.” 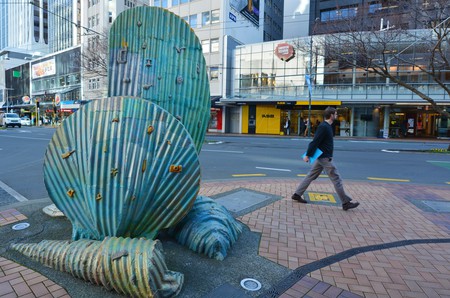 Along the Wellington waterfront, in the Kumutoto precinct, is Nga Kina, a sculpture by Michel Tuffery made up of nine fibreglass and reinforced concrete giant sea urchins (kina) half-submerged in water. Installed in 2012, it links modern-day Wellington to its rich Māori heritage. According to the Wellington Sculpture Trust, the work highlights the physical geography of this particular area, especially, it says, “the Kumutoto stream, which flowed from Woodward Street to the sea and the location of the Kumutoto Pa, a pre-European Māori settlement”.

The city of Wellington’s public art landscape is constantly evolving, with new works being unveiled several times a year, supporting the city’s identity as a creative capital. The council’s Tira Poutama team say these public art projects not only offers development opportunities for artists but also allows the city to engage residents in “creative place-making and supports communities to take ownership of their places”.