How Kiwi Muralist Mr G Made His Mark on the World 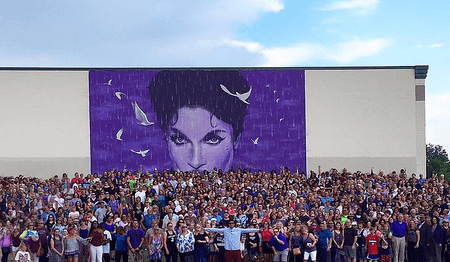 Multi-disciplinary artist Graham Hoete – also known as Mr G – rose to international fame after painting two remarkable murals in the United States. That success didn’t happen overnight though, as Mr G has been in the industry for more than a decade. Here’s a look at the New Zealand artist’s highlights thus far.

Mr G was born in 1979 in the Bay of Plenty. He is a self-taught artist, with no formal training beyond high school. Driven by a love and passion for his work, Mr G honed and experimented with his artistry in his own time. He eventually relocated to Sydney, where he lived for five years. All up, Mr G has spent 12 years steadily working on commissioned and personal projects. A lot of his early work was inspired by his love of dogs, and he often intertwined different mongrels with a string of quirky pop culture references. 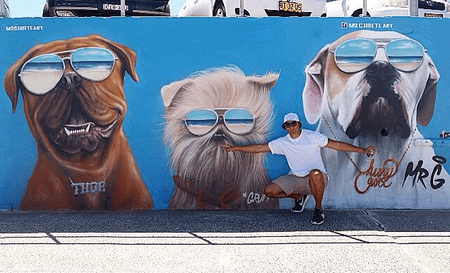 Mr G is renowned for his murals, but he works across various mixed media. This includes driftwood paintings, portraits using a mix of spray paints and acrylics, street art, and graphic designs for prominent companies like Nike, V Energy, and Westfield. Some of his artwork is heavily influenced by Māori and New Zealand culture, while others offer a light-hearted perspective on some of the world’s most iconic figures. 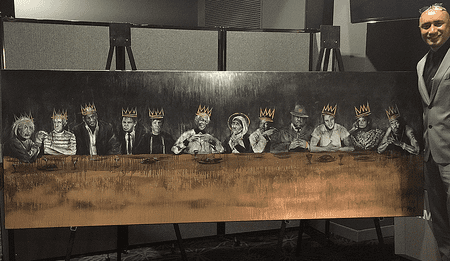 It was an interest in the contemporary that put Mr G’s work in the spotlight. His most prominent murals were a true labour of love – unpaid, and inspired by people Mr G strongly admires. The first, in Oklahoma City, was of Kiwi basketball star Steven Adams. Then it was Mr G’s tribute to Prince, a Purple Rain-themed mural in the singer’s hometown, that wowed crowds the world over. During the latter project’s unveiling, in Chanhassen, Minnesota, Mr G performed a haka and addressed the singer’s fans in Te Reo Māori – his special way of showing respect to one of his idols.

Since then, Mr G has worked on other murals in the US and abroad. He is currently back in New Zealand, divvying up his time between his commissions and art workshops for young people. Mr G is also pursuing a larger project, paying homage to New Zealand society: The 100 New Zealand Portraits series. He is progressively travelling around the country, painting murals of the average Kiwi – but in places one might not expect. Thus far, Mr G has completed portraits in the Bay of Plenty and received plenty of positive feedback and suggestions of places to go. The idea is to capture Aotearoa‘s people and rural landscapes, eventually compiling all the completed images into a book. 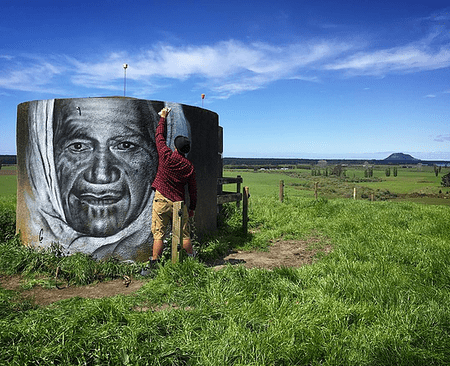