The New Zealand capital of Wellington is a centre of creative activity, inspiring architecture and refreshing natural beauty. Francesca Baker has wandered the Wellington streets to bring us the most intriguing things to see and do in this highly underrated city. 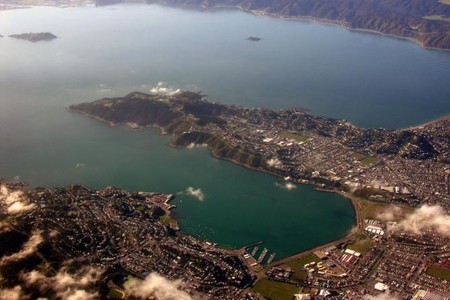 The Lonely Planet has a habit of saying things that have longevity. A few years ago it dubbed Wellington the ‘coolest little capital’, and, along with the official tagline ‘Positively Wellington’, it is a label which has seems to have stuck.

New Zealand’s capital is indeed a vibrant, thrilling and creative hub. In a country of only 4.5 million people in total, it is never going to be big and bustling, but unlike say the South Island’s Queenstown or Christchurch, or Australia’s Cairns, it is a ‘city city,’ a network of people, places, motivations and lives all weaving their way around this harbour and the myriad streets that unravel from it. The word cool is not easily defined, or at least definitions vary. On this quest it is about finding a place of apparently effortless style, a laid back atmosphere, acceptance combined with innovation, and a place at ease yet evolving — all in the cultural and artistic space. This is a city that is creative by nature rather than trying hard to be and a place packed with passion.

A cool city has to look good, and a combination of architecture and art allows Wellington to shine here, even on the windy and cloudy days for which it is so famous. The wharves have been renovated and regenerated, the former industry that thrived here no longer so prevalent in the area, and the timber clad buildings are now home to restaurants and bars, and some of Wellington’s premium attractions. Fusing the maritime and industrial heritage with a vibrant future has allowed for innovative projects to shine, and appeals to a variety of travellers. Housed in ornately decorated cream Shed 7, once a wool store, is the New Zealand Academy of Fine Arts. The Bond Store was refurbished in 1999 to be home to the Museum of Wellington & Sea, a Category 1 listed building, built back in 1892 containing both a cargo warehouse and Wellington Harbour Board Offices, and the ornate rooms can still be seen in the (brilliant) museum. Old St Paul’s, a Gothic revival church, constructed entirely from native timbers is complemented by New St Paul’s, a stone built church of an almost yellow hue, which can be found next to the imposing elegant grey of the Parliament, and the love it/loathe it infamous Beehive. Even Starbucks has a stylish home, one of many shops and boutiques in what was built in 1901 as the New Zealand National Bank, the corner building richly decorated with elegant columns and cornices, and an animated musical clock. This juxtaposition of styles and uses, past and present, is one of the ways in which the city makes itself an easy talking point. 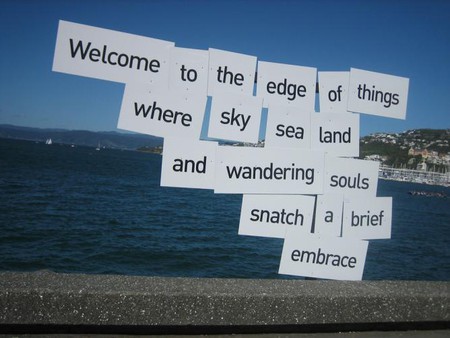 Underneath the wharves things are happening too. Every Saturday in the Jervois Quay carpark numerous local stallholders set up to sell their homemade wares, craft pieces, artisan goods and herbal remedies. The night market that runs along super funky Cuba Street offers something similar, with the added bonus of buskers and musicians further illuminating the already vibrant atmosphere. Local jewellery maker Maria Francesca told me how although the stones she uses from the earth are what people see, it is the people of the city who bring her work to life.

Seeking culture and art, it is natural to be drawn to museums and galleries. They all have something in common: a pride in Wellington and the people. It is something that penetrates the whole city, but not in a way suggestive of a cocky swagger, but more a laid back acceptance of who they are. The Museum of Wellington & Sea was voted one of the world’s top fifty museums, and it cleverly tells the story of the city through 100 objects of varying source and significance, from technology, historical artifacts, local people, media and events — a hundred tales to be told, that together reveal a densely interwoven fabric of the city. In Shed 11, an Edwardian Heritage Building on Customhouse Quay can be found the Portrait Gallery, currently filled with ‘portraits of us’. This self reflexive exhibition is one of many that demonstrate the passion that local people have for art as a way of expressing themselves, and the diversity of faces and styles is captivating.

Days have been lost in Te Papa, the national museum, exploring everything from the formation of the country in terms of tectonics and plates to the formation of the country’s culture from Maori tradition, European settlers, and modern globalism. Using a ‘bicultural’ approach to its organisation and curating, it responds to and represents the two world views of the Tangata Whenua (the first people of the land) and Tangata Tiriti (people living in New Zealand by right of the treaty) and thus is filled with artifacts and exhibitions that demonstrate the fascinating history of the city, and its future development. Stephanie Gibson, the museum’s Curator for Contemporary Life & Culture believes that this is one of the reasons for the museum’s success, along with its overarching vision of ‘Changing hearts. Changing minds. Changing lives.’ 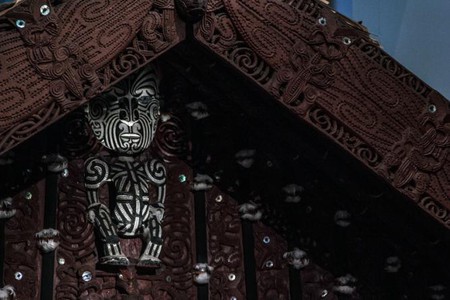 Cool travellers have to have a cool location in which to rest. On Wellington’s shores the Museum Art Hotel is by far the most creative, innovative, and aesthetically pleasing place to stay. A home for the private art collection of owner Chris Parkin, the 6 floor, 165 roomed hotel is stylish and decadent. Decorated in rich gold, luxurious crushed velvet, deep mahogany wood and swirling soft carpets, it is bold and elaborate, but never brash. The artists and genres vary wildly, making the experience of staying here a sort of pleasant and stimulating meditation on creativity. Motorbikes are an obvious fascination, evidenced by the Massimo Tamburini F4 that greets visitors on the way in. The collection also features more traditional art objects like Meredith Parkin’s surrealist paintings, Ian Scott’s prints which consider the relationship between popular culture and highbrow art, and Angela Singer’s ‘recycled vintage taxidermy’. Fans of the Rolling Stones will also be enthusiastic about the hotels’ Telecaster autographed by all members of the band.

Art and culture is prevalent everywhere in Wellington, even at the local drinking hole. I walked past the black door to the Hawthorn Lounge a number of times, and if that isn’t cool, I don’t know what is. What makes it even more achingly hip is that it was never meant to be so elusive to the eye — when the next door restaurant was being renovated the sign was taken down, and there was simply no room for it to be hung up again. Established seven years ago and fashioned in a way that reminded the owner of his grandfather, it is dark and deeply lit, with card tables, a gramophone, little niche booths, candles in snuff boxes and a list detailing the rules of engagement for a gentleman when near a lady — offer your chair, buy a drink, do not harass — but the bartender may pass a written note on your behalf by way of introduction. Aesthetically pleasing in a natural way, there is something captivating about its elegance. 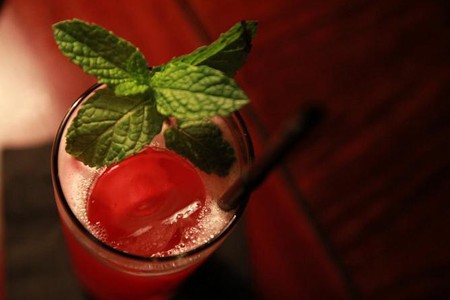 Another cool spot for drinking is The Library. As the name suggests, this bar is lined with shelves of books, a perfect place to while away hours alone or with friends (amongst books you are always with friends), drinking their innovative blends of spirits and other beverages. Caffeine addicts can get their fix at one of the trendy neighbourhood coffee spots such as Cafe Racer, where a curbside counter serves coffee to customers seated on motorbike stools, or Crumpet, a quirky tea shop complete with fifties pinups and sweet swing music.

Those in search of a deeper literary scene can head to the City Library, where four storeys of bookshelves hold over 600,000 works of fiction, non-fiction and more. Meanwhile Unity Books and Arty Bees stock both new and used titles, host regular events, and are staffed by the kind of people bookshops should be staffed by — those keen to share their passion for reading, but who give the impression that they would rather be reading themselves than serving in a store. Finally the Wellington Writers Walk leads the public along the harbourside with a series of quotes about the harbour by New Zealand authors. The most famous quote is perhaps that by Wellington native and turn of the century writer Katherine Mansfield, whose house stands on the quay for all to visit. 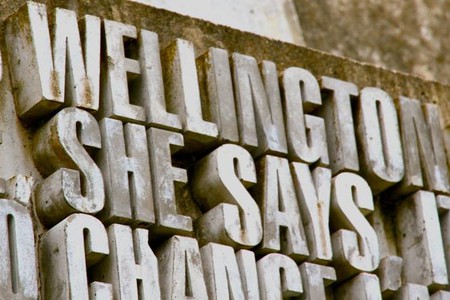 Kate Button, Audience Engagement Officer at Te Papa, tells me how Wellington has always been a city filled with culture, something she posits may be due to its location and size. On the southern most point of the North island, where the wind blows, the sea laps and the mountains sparkle into the horizon, it is a transient and ever altering place that brings people from all over New Zealand. Perhaps Lauris Edmond put it best in her 1994 publicationScenes from a Small City, which are immortalised on the sloping variegated concrete and timber pedestrian City To Sea Bridge:

‘It’s true you can’t live here by chance, you have to do and be, not simply watch or even describe. This is the city of action, the world headquarters of the verb –‘

Alluringly left there, the line break leaves the viewer to consider their own action. And that is what happens in Wellington, and what makes it such a cool and cultural travel destination. As a creative and ever-evolving hub, I can state with near certainty that this guide will almost instantly be out of date. The fascinating capital of New Zealand doesn’t stand still. You had better get there soon.