The 55thVenice Biennale International Art Exhibition will see the striking work of photographer, sculptor and light installation artist Bill Culbert represent New Zealand in their National Pavilion. Selecting the complex architecture of the Istituto Santa Maria della Pietà (La Pietà) as his first choice, Culbert’s works will interact with several of the venue’s spaces, making use of the differing lighting conditions and distinct spatial auras.

The 2013 Venice Biennale will see New Zealand return to the most prestigious arts event in the world for the sixth time since its inclusion in 2001. In each festival since its debut, the artists presented in the New Zealand National Pavilion have displayed spectacular installations that utilise the allocated space through skilful curation. These works included Michael Parekowhai’s impressive bull and piano sculptures in 2011 (‘Chapman’s Homer’), and Francis Upritchard’s fusion of history and sixties psychedelic culture in 2009 (‘Save Yourself’). Even the painter Judy Millar – the second New Zealand representative of 2009 – displayed artworks that resembled installations rather than traditional paintings, with her large canvases and coloured surfaces forming an enclosing art environment within the circular structure of the La Maddalena Church. Bill Culbert will continue this ongoing tradition of sculpture-focused art with his creations that unite found objects and light. 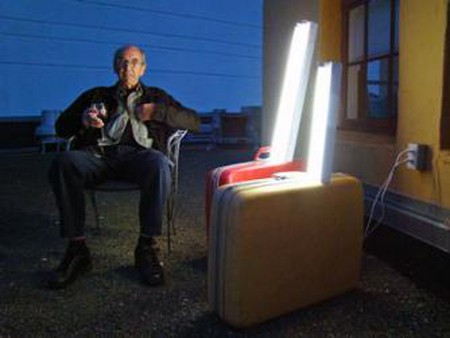 Entitled Front Door Out Back, Culbert has stated that he wants to portray ‘an energy and simplicity’ in this exhibition. The title encapsulates this idea, with a colloquial saying that sounds both natural and paradoxical, allowing it to either rattle in the viewer’s mind or avoid particular attention. However, if the title doesn’t arouse notice, Culbert’s works certainly will. Some of Culbert’s pieces consist of worn out furniture that have been pierced by fluorescent lights, creating a notable dichotomy of old and new which can be interpreted as both playful and violent. In one work, padded chairs hanging like chandeliers have been penetrated by beams of light, and strike the viewer as a humorous decoration while also insinuating a past aggressive act. Works like this are juxtaposed in Culbert’s oeuvre by neater images such as Hut, a figuration of fluorescent tubes that are instantly recognisable as a house, but which provide no shelter. Critics and art writers have commented on the relevance of Culbert’s style within the setting of Venice: an old city with an abundance of history that is both illuminated and overrun by tourism, with visitors looking for quick and shallow summaries. 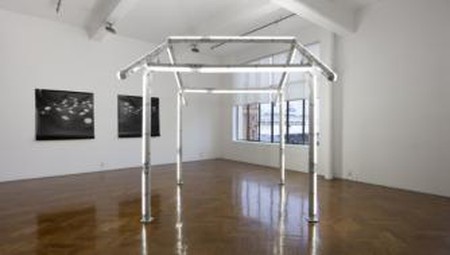 Born in 1935, Culbert has been experimenting with light since the 1960’s and has exhibited his works in multiple internationally solo shows. Some of his works are currently being displayed in London at The Hayward Gallery as part of the exhibition Light Show. Culbert now lives in London and Southern France, but regularly returns home to New Zealand.

Curating his work is Justin Paton, one of New Zealand’s prominent names in the art industry. Writer, critic, television presenter and curator, Paton’s multidisciplinary background adds a unique element to his work. Paton is the senior curator at the Christchurch Art Gallery Te Tuna O Waiwhetu. Working together with the rest of the New Zealand team, Front Door Out Back will be staged in the exciting space of La Pietà and promises to be a stimulating exhibition in 2013’s Venice Biennale.

Theme: Front Door Out Back