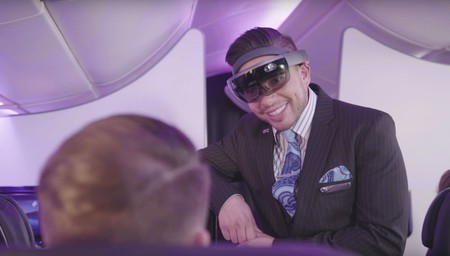 When we fly we can get quite stressed. We can also be happy, frustrated, sad, or any other number of emotions. Dealing with a plane full of people and a vast range of moods is part of what makes a flight attendant’s job so difficult. Air New Zealand is working on some astonishing new technology that could make their lives, and ours, a little easier.

The airline has been working with Dimension Data, an IT service provider, to design software for the Microsoft HoloLens. The HoloLens creates a mixed reality, where holographs are overlaid onto the real world. The potential of this technology is huge, as it could give us information on almost anything recognizable just by looking at it. The HoloLens is still only available for developers, and is very much in the experimental stage.

The cabin crew would wear the glasses and be given key customer information when they look at each passenger, including meal choices, time since last drink, and the program is also reportedly sophisticated enough to detect passengers’ emotions by analyzing visual and audio cues.

“This software is a great example of us collaborating with other partners and exploring how technology could enhance the way our people work as well as the experience they deliver to our customers through greater personalization,” said Avi Golan, Air New Zealand Chief Digital Officer.

The video below shows the airline’s vision for the future of air travel. The HoloLens is likely to look different in future iterations, meaning the slightly disconcerting thought of having a giant pair of glasses looming over you shouldn’t be permanent. It’s not clear how far along Air New Zealand is with developing this technology, but it shows the potential of augmented reality to change the service we get when we step on a plane.