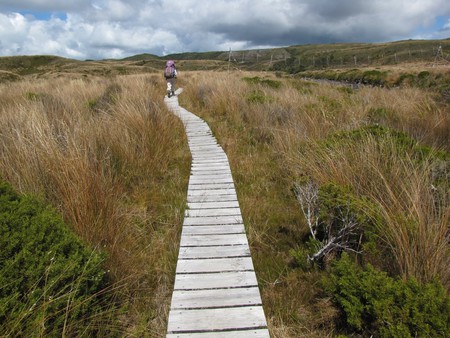 A hiker on the Heaphy Track | © Steve Bittinger/Flickr

The Heaphy Track is one of New Zealand’s most popular hiking (or tramping) routes. Traversing an ancient trail composed of massive tussock downs and lush forestry, the multi-day trek offers some of the greatest geographical contrasts you could possibly imagine.

The 82-kilometre (48.7-mile) route is set within Kahurangi National Park, and is the largest of the country’s nine Great Walks. It is usually walked over a course of four or five days and runs from the Brown Hut in Golden Bay, 156 kilometres (97 miles) from Nelson, to Kohaihai on the West Coast.

The track was named after Charles Heaphy, one of the first European settlers to explore the area in 1846. At the time, Heaphy had partnered up with Thomas Buller to survey the West Coast in the hopes of extending colonial settlement in the South Island. Two Maori guides accompanied the duo as they traversed the trail’s coastal sections.

Maori tribes are known to have travelled this route, and settled on the lower course of the Heaphy River, from as early as the 16th century. They would walk the Heaphy Track to collect pounamu (greenstone), which would be used to create traditional tools, weapons, and ornaments.

A hiker on the Heaphy Track | © Steve Bittinger/Flickr

These days, many who walk the track opt to test their hiking skills along the first couple of stretches of the journey. That being said, the trail is very well-marked and could be tackled by anyone with moderate level of fitness.

From autumn to spring (early May-late November), the Heaphy Track becomes a shared walking and mountain biking route – it usually takes two to three days to explore the area by bike. Take extra care if you’re walking during those seasons as you’ll need to be mindful of the additional cycling traffic.

There are a number of campsites and huts for hikers and cyclists to stay in throughout the trek. Campsites don’t require any prior booking, but the huts do – if you can’t forgo basic luxuries like hot water and cooking facilities, you’ll need to secure your spot in the huts well in advance to avoid disappointment. 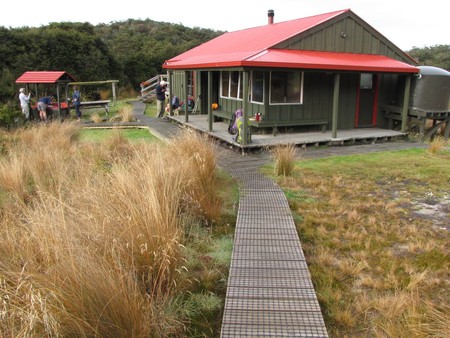 Hikers can start the walk from the Brown Hut in Golden Bay, 156 kilometres ( 96.9 miles) from Nelson; alternatively, one could go the opposite direction: from Kohaihai, 100 km (62.1 miles) from the West Coast town of Westport.

Those starting from Brown Hut will first tramp towards the Perry Saddle Hut. The five-hour, 17.5-kilometre (10.9-mile) trip traverses the bridge over the Brown River before winding up a defined bush track. Towards the end of the trip, the Aorere Valley comes into view – and on clear days, you can even see the North Island’s Mount Taranaki from afar. Just before reaching Perry Saddle Hut you’ll come to Flanagans Corner, which at a soaring height of 915 metres (3002 feet) is the highest point of the entire track. Near the hut there’s also the Gorge Creek, which is a deep pool that’s quite popular for swimming – those waters do get quite nippy at times, so it’s probably best not to dip into them during the colder months. 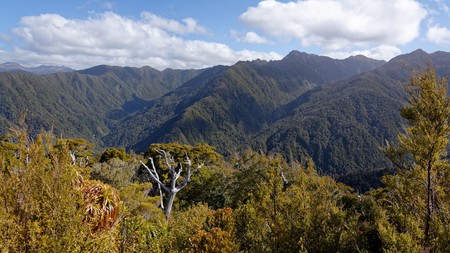 From Perry Saddle, you’ll venture towards Gouland Downs hut. This is actually quite a short trip: just seven kilometres (4.3 miles), or approximately two hours of walking. You’ll swerve above Perry Creek through patches of beech and tussock before the track widens to reveal Gouland Downs. The trail then descends into Cave Brook – right next to it, you’ll spot an iconic pole to which many trampers have laced up their old boots over the years.

Definitely spend some time exploring Cave Brooks’ surrounds, as there are plenty of natural gems to keep things interesting. These include several limestone arches, which were the last remnants of some ancient caves, as well as a small waterfalls tucked within one of the cave passages.

The track becomes relatively level as one departs Gouland Downs Hut to head into Saxon Hut. The latter is nestled within Gouland Downs and was named after John Saxon, who explored the area in 1886. Tussock country plains and riverbeds abound, but be careful exploring the area when there’s mist as one can easily lose their bearings. 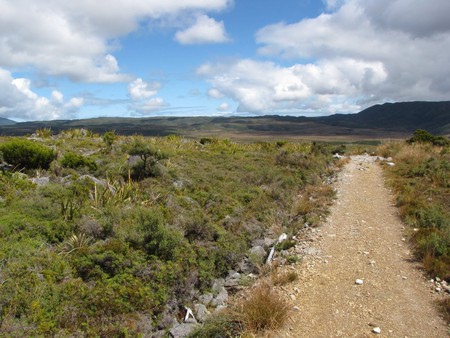 Saxon Hut will lead you on an 11.8-kilometre trajectory towards James Mackay Hut. The track initially descends into the grassy flats of the Saxon River before climbing into the expansive bridge that connects Gouland Downs to Mackay Downs. Be wary that parts of Mackay Downs are prone to flooding. There’s a 70-metre (230-foot) stretch that, after a heavy bout of rain, becomes impassable when the water rises to surface.

The trail contours several streams as it skirts through the edges of Mackay Downs, ultimately tumbling to the Heaphy River on the left hand side. An open terrace overlooking the Tasman Sea and the Heaphy River will lead you into James Mackay Hut, which was named after the explorer who campaigned for a bridle track to be established between the West Coast and the Golden Bay town of Collingwood. 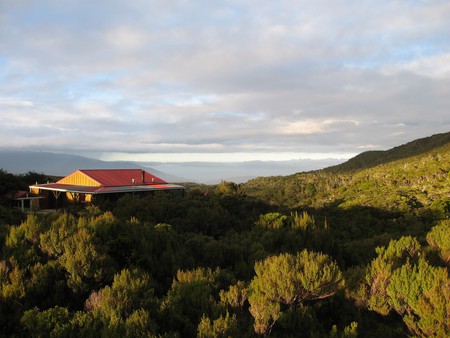 We’re almost finished now, just two more routes to go. First up, the James Mackay Hut to Lewis Hut route, which covers 12.5 kilometres (7.8 miles) in distance and should take around three and half hours to complete. The track eases into the surrounding beech forests before it exposes some of the elevated trees that dominate the West Coast’s verdant landscapes. The creeks of the Lewis River and its surrounding nikau palms eventually seep in – and you’ll soon find yourself in its junction with the Heaphy River and the Heaphy Hut.

Finally, from the Heaphy Hut you’ll spend five hours delving into the 16.2-kilometre (10.1-mile) track towards the mouth of the Kohaihai River. Check the tidal conditions before setting off, as parts of the track become temporarily inaccessible when the tides are high and the seas are turbulent. Most of the trail southwards to Kohaihai is forest-based, though you can detour into the coastlines in some parts of it. The Katipo Creek, Koura Point, and Scotts Beach are some of the stunning natural gems hikers will get to see before they climb over Kohaihai Saddle and cross the bridge to Kohaihai River – thus concluding this remarkable journey. 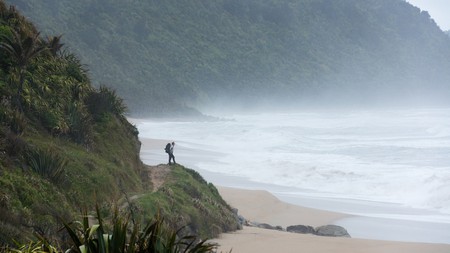