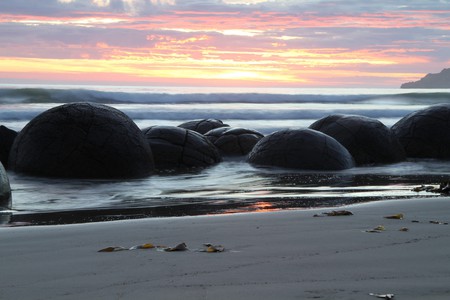 Imagine walking down the beach, and finding yourself amid a series of rocks that are as big – if not bigger – than your average human being. If you’re exploring New Zealand’s South Island, it’s likely you’ve just reached the ever-compelling Moeraki Boulders. Photographers love them; geologists are amazed by their geometrical perfection. It’s fair to say the Moeraki Boulders have etched their place as one of New Zealand’s most incredible geographical wonders.

What are the Moeraki Boulders, really?

The grey-coloured Moeraki Boulders have a slightly deceiving name. These ‘boulders’ are actually septarian concretions, carved out of millions of years of erosion as the harsh waves continuously struck the surrounding mudstone. If you’re unfamiliar with the term, concretions are hardened matter found in sedimentary rock and soil – they’re not rocks themselves, but sturdy mineral masses that eventually weather out the rocks around them. Septarian concretions are interesting phenomena in their own right as they are characterised by unique fissures (aka the septaria) that are quite similar to turtle shells in appearance. Geologists believe septarian concretions are caused by a deposition of minerals like calcite (i.e. calcium carbonate), which is the main component of limestone among other rock formations. 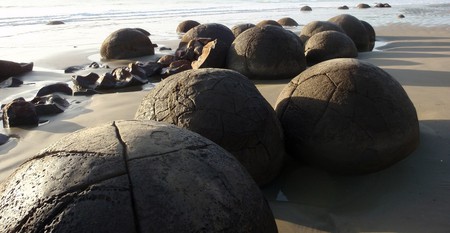 A close-up of the Moeraki Boulders | © Ian Cochrane/Flickr

Where are they located?

The concretions are scattered across Koekohe Beach, between the towns of Moeraki and Hampden on the Otago coast. Some of them are found in isolation while many are set in clustered groups. These geological marvels are part of a protected scenic reserve that can be accessed from State Highway 1, just south of Hampden.

What makes them so appealing?

The exquisite shape and size of the Moeraki Boulders have always been the subject of curiosity and intrigue. Māori legend tells us these spherical boulders are the remains of the eel baskets, calabashes and kumara (sweet potato) that washed ashore after the Ārai-te-uru waka (an ancestral canoe) was wrecked during a fierce storm on its voyage back to the South Island from the homeland of Hawaiki. 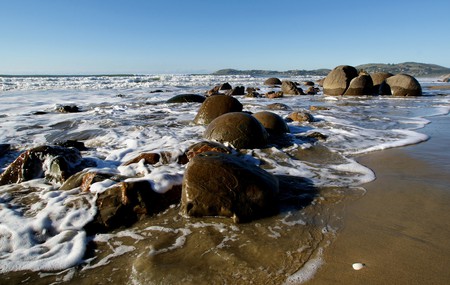 Throughout history, visitors to Koekohe Beach were fascinated by these coastal spheres. So much so that laws had to be implemented to ensure people weren’t taking smaller boulders as souvenirs. Old photographic records indicate that many more boulders were present in the 19th century, but numbers dwindled as tourists started nabbing them. A few of these have since been rescued. Even the Otago Museum snapped up its own relic before any laws were, well, set in stone: a 6-foot, 7-tonne boulder that now resides outside the museum’s original entrance. The beach where the Moeraki Boulders lie has been a protected scientific reserve since 1971, making it illegal to remove, sell, or vandalise the boulders in any way. 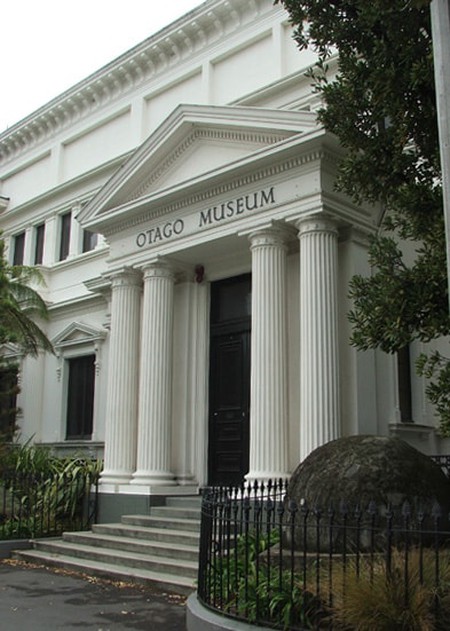 How do I see them?

Despite legal protection, accessing the Moeraki Boulders is incredibly easy. You can either take a stroll along Koehoke Beach from the Moeraki Boulders Scenic Reserve car park, or venture across the direct track that connects the beach to the local cafe. There’s a picnic area near the car park if you want to make a full day trip out of it. If you’re coming from the northern part of Otago, the boulders are an approximate 30-minute drive south of Oamaru via State Highway 1; those coming the south just need to take a 45-minute trip up the same road from Dunedin. 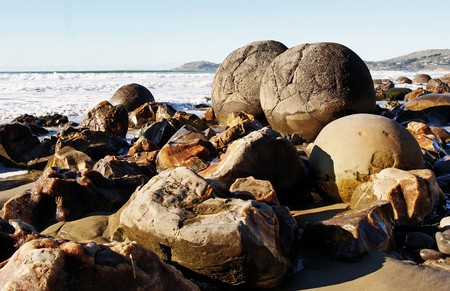 If you’re an avid photographer looking to capture the boulders in their best possible light, consider visiting in the early morning or late afternoon (a couple of hours before sunset) when the sunlight is softly cast around them. Make sure to check the tides before setting off too – a low tide provides for better walking and photo opportunities. Cloudy winter days can also make for dramatic, almost apocalyptic, images. 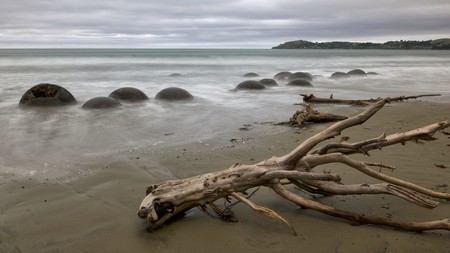