A Brief History of the Old Bank Arcade, Wellington 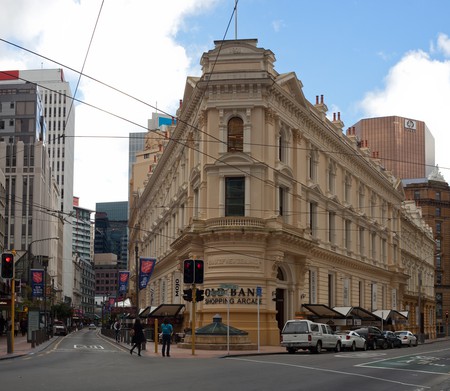 The Old Bank Arcade is one of Wellington’s most distinguished heritage buildings. In modern times, the former Bank of New Zealand headquarters is a prime shopping destination with a few hidden secrets up its sleeve. Come with us as we briefly explore this incredible landmark’s history.

The Bank of New Zealand was founded in Auckland in 1861, opening its first Wellington branch in 1862 and getting its first permanent building a year later in 1863. With the Head Office of the Bank being transferred to Wellington in 1894, new premises were needed to house the emerging financial institution. Thus, Thomas Turnbull – a notable New Zealand architect at the time – was tasked with designing the bank’s newest headquarters in 1899. T Carmichael was contracted to construct the building in 1899 and the project was completed by 1901.

In the course of Wellington’s 19th-20th century history, four Bank of New Zealand (BNZ) buildings were erected. All in the same central business district street block and each with their own distinctive architectural style. The Old Bank Arcade was the first of the lot, occupying a prominent wedge-shaped site on the corner of Lambton Quay. The building was the only one of the four to be directly commissioned by the BNZ itself and is considered one of Turnbull’s most accomplished Classical designs along the course of his career. 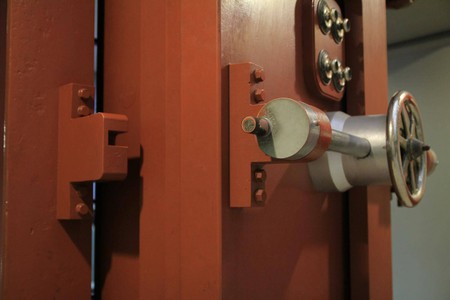 The Old Bank Arcade at a Glance

This Edwardian Baroque style structure is composed of a horizontal, three-layer facade. A heavily-rusticated ground floor and giant Corinthian columns separating the first two upper levels are some of the building’s noteworthy characteristics. The first floor also consists of pediment and columned windows, while the second is surrounded by round-headed windows with decorated corbels. Tessellated flooring, elaborate plaster adornments along the ceiling and Kauri wood furniture are some of the interior details that have stood the test of times. Over the years, the bank’s bracketed frieze and balustrade were removed amid fears of earthquake damage.

Turnbull’s original plan was to create a lavish, four-storey building, but the Government deemed this as too extravagant for the young, financially fragile bank. Upon completion, the Old Bank Arcade accommodated the Wellington BNZ branch on the first floor and the head office on the upper two levels. This arrangement was unchanged until 1985, when the Bank of New Zealand relocated to its second premises. 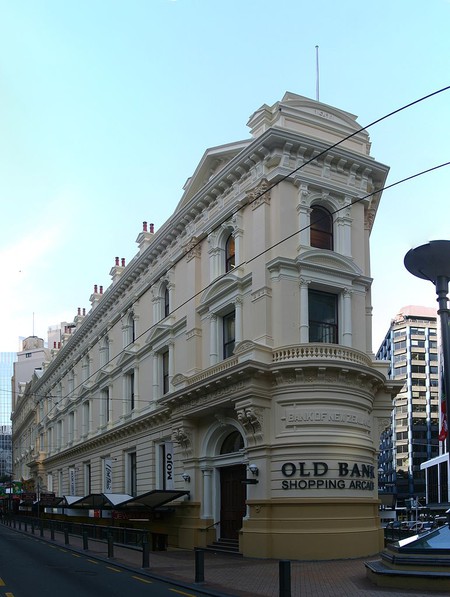 In 1997, renovations on the former Head Office of the Bank of New Zealand building unearthed a hidden secret. The remains of an old shipping vessel, which had remained in the premises since a major earthquake shook Wellington in 1855 were recovered from the site, including the ship’s bow sections as well as its old timber bilges. The Inconstant, a Canadian barque which became wrecked at the Wellington Harbour in 1851, was salvaged by John Plimmer and converted into a warehouse in 1849. Timbers from Plimmer’s Ark, as it became known were first discovered in 1899, being re-purposed in the making of the director’s chair in the former Bank’s Board Room. Some of the recovered wood is still on display under a glass cabinet in the arcade, while others have been taken to a conservation site for archaeological preservation.

In present times, one of the best ways to discover the Old Bank Arcade’s history is to pay attention to its animated musical clock. Suspended from the old Banking Chamber’s ceiling, this mechanical marvel chimes every hour, opening up to reveal a lively recreation of life in Wellington post European settlement. Tiny vignettes rotate to illustrate the city’s origins, from British occupation right to the construction of the Bank of New Zealand building, as music and a recorded narration complements the scenes on show. 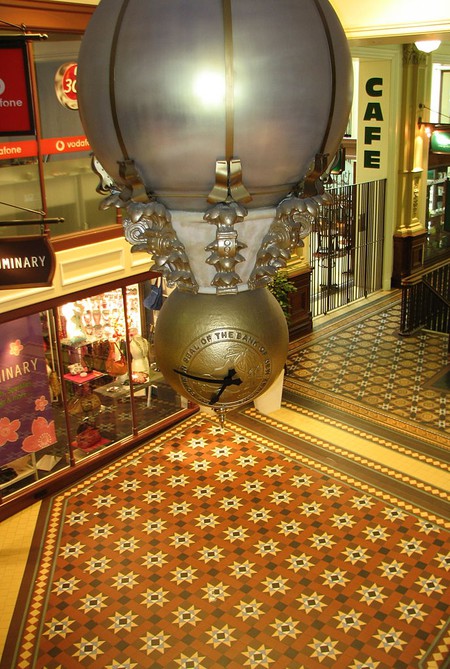