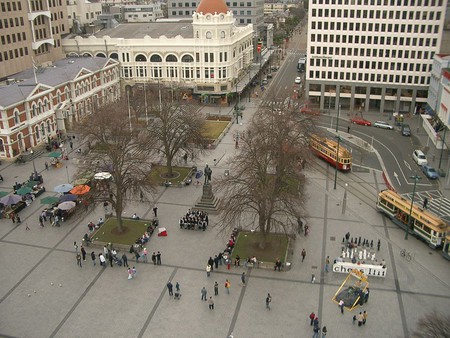 Few would argue that Cathedral Square has always been the geographic and symbolic heart of Christchurch. After the New Zealand city was struck by a magnitude 6.3 earthquake on 22 February 2011, the fate of this historic landmark was unsure. From its early beginnings to the current (re)developments, here’s how Cathedral Square has made its mark in the local community.

Cathedral Square’s name is somewhat misleading, as the area is actually cross-shaped. It was originally to be called Ridley Square, after Bishop Nicholas Ridley, an English martyr who died for his Protestant beliefs. This, however, never materialised; in fact, town plans for central Christchurch from 1850 clearly mark the area as Cathedral Square.

In 1851, the Canterbury Association secured a portion of the square for ChristChurch Cathedral and Christ’s College. The Church Property Trustees took control of the land in 1855, and in 1857, the school’s location was moved from the square and was instead established next to the Botanic Gardens, where it still stands today.

The provincial government took over much of the land in 1862, leaving aside the area meant for the cathedral. Soon after, a shingle road was built to link two sections of Colombo Street. By 1864, the first cathedral foundations were laid, and activity began to increase around the square. 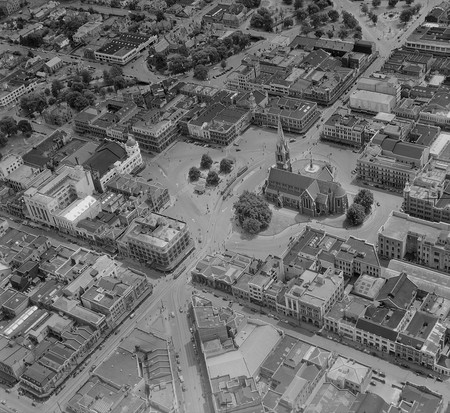 The Heart of the City

With the inauguration of Cathedral Square, the urban bustle had found a new base. The local Bank of New Zealand opened on the square in 1866, and on 6 August 1867, New Zealand’s first public statue, an homage of city founder John Robert Godley, was unveiled opposite the cathedral. In the midst of all the action, a post office opened, footpaths were laid, a cabstand was fitted, and street performances, country fairs, side shows and various celebrations were held in the vicinity.

The area also became the key stopover for public transport when steam trams were introduced in 1880, and Cathedral Square became the departure point. In 1954, buses replaced the trams, and an arrangement with the Lichfield Street Bus Exchange was established in 2000.

In 1904, the town’s first major newspaper was printed at the Lyttelton Times Building, and when the Press Building opened in 1909, it served as the hub for the newspaper staff until the 2011 earthquake left a permanent mark, and the building was demolished.

There have been many new developments through the years. In 1915, the first of six Everybody’s Theatres opened on the periphery of the square. On 9 June 1937, the Citizen’s War Memorial was unveiled and hosted an ANZAC Day service for the first time on 25 April 1938. From the 1980s until the late 2000s, the line-up of community events continued to increase and included New Year’s celebrations, cultural and artistic events, the annual World Buskers Festival, and weekly arts and crafts markets.

The Square After the Earthquake

Cathedral Square was among one of the areas hit the hardest by the 2011 earthquake. Some structures, including the Lyttelton Times and Press Buildings, were damaged beyond repair and were demolished. The Godley Statue was toppled, the ChristChurch Cathedral was struck with significant force, the city centre had to be evacuated, and after a risk assessment by the Canterbury Earthquake Recovery Authority, the square was closed off to the public. Cathedral Square wasn’t reopened until June 2013.

Things are starting to look up for this enduring focal point of Christchurch. New art installations have popped up, and markets and cultural events are more prevalent since the square reopened. Discussions about the restoration of the ill-fated ChristChurch Cathedral are ongoing, but in the meantime, the Cardboard Cathedral serves the religious community. In brief, all signs show that Christchurch locals will not give up on the historic heart they call home and that the square will regain momentum, slowly but surely.