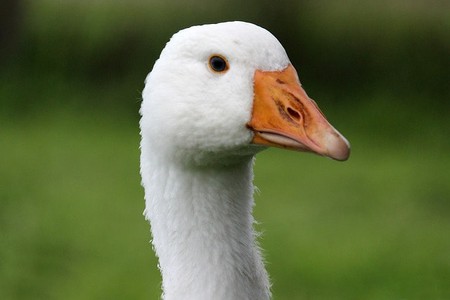 A goose in a polyamorous relationship with two swans has died in New Zealand aged 40.

Thomas, who was blind, bisexual and polyamorous, died of natural causes at the Wellington Bird Rehabilitation Trust (WRBT). He was with his lifelong mate Henry, a black male swan, for 24 years before Henrietta, another swan, joined the couple to make a ménage à trois. The triplet raised dozens of cygnets together and were a happy family.

Thomas segregated himself from other geese, preferring a gay partnership with Henry instead. He retired to the WRBT in 2013 after losing his eyesight – but he never lost the love of his partners.

Thomas was a beloved goose, with people all over New Zealand following his exploits. He started his life in Waimanu Lagoon in Waikanae, where he charmed residents with his personality.

The WRBT announced his passing, which happened on Saturday, February 3, on Facebook, writing: ‘It is with a heavy heart, we announce the passing of our beloved blind goose Thomas.

‘We have loved having Thomas as a part of the WRBT Family and have treated him with extra special love and care! He lived for corn on the cob and if it wasn’t there when we put him back into his house at night, he was not happy.’

Thomas was well cared for and even fostered several broods of cygnets in his old age.

Mik Peryer, a birdwatcher who knew Thomas, told Stuff about his love story. ‘It should be celebrated,’ he said. ‘Prior to Henrietta turning up they had about 18 happy gay years together.’

A memorial for Thomas will be held at the Waimanu Lagoon in Waikanae on Saturday, February 17 at 1.45pm. The WRBT writes: ‘He will be buried next to Henry with a corn on the cob and have a plaque made in tribute to his wonderful life.

‘It will be a special day, open to anyone who wishes to say goodbye. He deserves nothing less than the send-off he is receiving and we hope to see you there.’