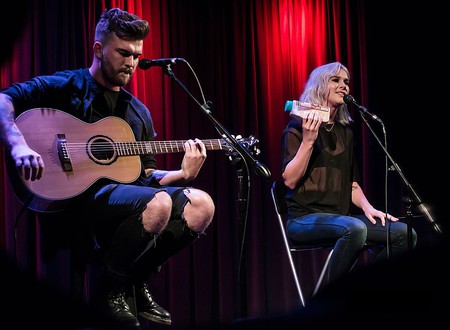 New Zealand always hits the right notes in the music industry. Lorde, Kimbra, Crowded House, Ladyhawke and the comical Flight of the Concords are among the country’s most famous exports. There’s a treasure to trove of sounds to be cherished still — we’re here to get you inspired with 10 Kiwi musicians that everyone should know about.

Yumi Zouma started with three friends from Christchurch who defied physical borders to produce some cool synth sounds. After the 2011 earthquake, the original members (Josh Burgess, Charlie Ryder and Kim Pflaum) found themselves living and working in different parts of the world — Yumi Zouma was their way to stay in touch, despite the distance. The expat trio quickly earned international acclaim after touring as a support act to Lorde. Since then, one of the original members has gone solo, and two others have come into the picture. These days, Yumi Zouma is composed of Sam Perry, Christie Simpson, Josh Burgess and Charlie Ryder.

Madeira is the solo project of former Yumi Zouma member Kim Pflaum. The venture actually began prior to Pflaum’s involvement with the group, as a personal form of artistic escapism. Under the moniker Madeira, Pflaum is signed with US record label Carkpark Records. From New Zealand to Japan, the United States and France, Madeira’s work continues to inspire and amaze a truly global fanbase. Sweet melodies and nostalgic synth sounds are some of the distinctive touches in each song. Her debut EP, Bad Humors, is out now.

Brother and sister duo Broods quickly gained traction after the release of their debut single, ‘Bridges’, in 2013. Nelson natives Georgia and Caleb Nott grew up in a musical family and, after a few stints in different bands and talent competitions, finally came together to pursue a project of their own. They began collaborating with music producer John Little (who produced Lorde’s ‘Royals’) and were eventually signed with American label Capitol Records. The band has also toured with the likes of Ellie Goulding, Haim, and Sam Smith.

From Auckland to the world, experimental musician and producer Chelsea Nikkel (aka Princess Chelsea) has made a remarkable impression with her unique stylistic choices and beautiful vocals. Baroque influences, stemming out of her classical training, emanate throughout Chelsea’s music. Her best renowned music video, for the song ‘The Cigarette Duet’, went viral in 2012, reaching more than 34 million views. Princess Chelsea has also collaborated with German electronic artist/producer Robin Schulz, who remixed her song ‘When The World Turns Grey’.

Aaradhna is an underrated New Zealand artist who is starting to make her impression in the international airwaves. Her powerfully soulful songs deal with personal, at times taboo issues: for instance, the 2012 single ‘Wake Up’ alludes to the artist’s struggles with depression, while the single ‘Brown Girl’ (and the album with the same name) talks openly about the identity issues and casual racism the mixed-heritage Kiwi singer has experienced throughout her life. The Brown Girl album was recorded in Brooklyn and Los Angeles and, since its release in 2016, has made it onto the American R&B/Soul Charts, the Australian ARIA Urban Album Charts, and the New Zealand Album Charts, reaching the number one spot in the latter.

Lydia Cole is lesser known, but definitely one to watch. The Auckland folk musician’s sophomore album, The Lay of the Land was crowdfunded through Kickstarter. Now, the artist is channelling all the support her campaign received onto something bigger: a farewell tour in New Zealand and Australia is currently in the works, and a move to Berlin is eminent. The new album stays true to Cole’s trademark acoustic guitar renditions while also incorporating synthesizers and electric guitars to keep things fresh.

Marlon Williams is an award-winning singer, songwriter and guitarist from the coastal port town of Lyttelton, near Christchurch. Going from choir boy to classical music student, and finally fronting a locally-renowned country music band, Williams’s music has evolved and melded in every stage of his life. As a solo artist, Williams won the New Zealand Music Awards’ Best Breakthrough Artist accolade in 2015, and was nominated for the Best Blues and Roots Album at the ARIA awards in Australia. His self-titled debut album was released to international audiences in 2016.

Instrumentalist, singer and producer Jol Mulholland is known for working alongside an array of Kiwi artists as well as his own solo efforts. He is one of four incredibly talented musical brothers from Christchurch, a city which always seems to have the right finger on the pulse when it comes to great music. Mulholland is one of those artists who seems to be able to pick and play just about every single instrument he comes across, and this definitely resonates in his tracks. Mulholland is Auckland-based, though he has done brief stints in New York also.

Fat Freddy’s Drop’s songs are an interesting amalgamation of dub, reggae, soul, jazz, R&B, and techno. The seven-man band started out in the 1990s as a side project from members of other popular groups in Wellington’s live music scene. By the early 2000s, they were a fully-fledged act with a growing profile in Europe, Australia and New Zealand. Locally, one of their most successful singles was ‘Wandering Eye’, which spent four months in the New Zealand Top 40 Charts, from December 2005 to March 2006. Their fourth studio album, Bays was released in 2015.

Brooke Fraser was well established in New Zealand and Australia before setting her sights onto the United States. The platinum-selling singer-songwriter, known primarily for her smooth, acoustic guitar songs and reflective, Christian-influenced lyrics, completely reinvented herself a few years ago. These days, her tracks continue to tap into the personal – but her sound is more influenced by electronic renditions. Fraser’s most recent single, ‘Therapy’, was released in late 2016.