Somewhere between fantasy and reality you find New Zealand’s contemporary art scene. From taxidermists to toymakers, these varied artists know how to tell a story.

Having worked for several years as a toymaker, Bill Hammond’s work has a sense of fantasy and a joy of painting that is more often seen in children. That is not to say that Hammond’s work is at all childlike, but rather a revolutionary juxtaposition of honesty and imagination. Hammond’s works address environmental issues, in particular the endangered birdlife of his native New Zealand. Fall of Icarus features brightly-colored anthropomorphic birds that resemble ornithological studies and figures of Maori folk tales. They perch upon oriental style branches that project onto a streaming background of pure greenish teal that shows Hammond rejoicing in color and his love of paint. 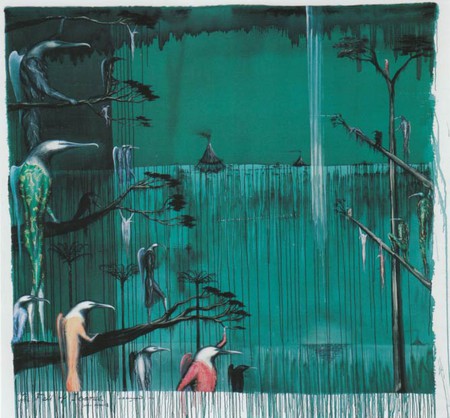 The work of David McCracken holds the universal appeal of fairytale. His welded aluminium staircase entitled Diminish and Ascend (Bondi, Australia) is his very own stairway to heaven. Evoking vast distances, the afterlife and a bridge between realms; Diminish and Ascend is breathtakingly beautiful. Much of David McCracken’s work involves revisualising everyday objects as something amplified and memorable. It is impossible to see McCracken’s work and not to engage with it. Wether you love it or hate it, his sculptures command their space, but they also act as mirrors (sometimes literally) that reflect the viewers perception. Perhaps that is why McCracken is so popular – his works speak to no one, yet everyone; being both active and passive in their own environment; they have a life of their own, but they’re always there, waiting to be seen. 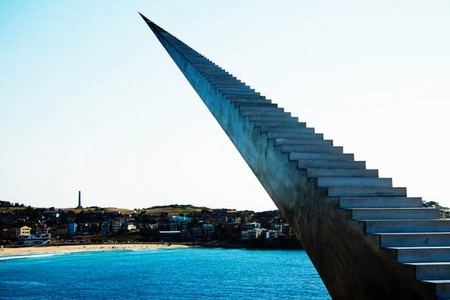 Born to an immensely artistic family, it is no surprise that John Badcock turned out to be as successful as he is. Working predominantly in oils on board, his use of paint can only be described as sculptural. Applied in thick textural layers the paint captures the essence of each person or object and their movement. Figure in Landscape manages to be both serene and confrontational at once. The calm sandy beige tones of the landscape in perfect harmony with the pink tinged body, but the lack of face creates an intense sense of unease. You can’t help but look into the vacant human frame, it is captivating and disturbing as only the human form can be. John Badcock certainly understands paint and people and exploits both medium and viewer to astounding effect in his artworks. 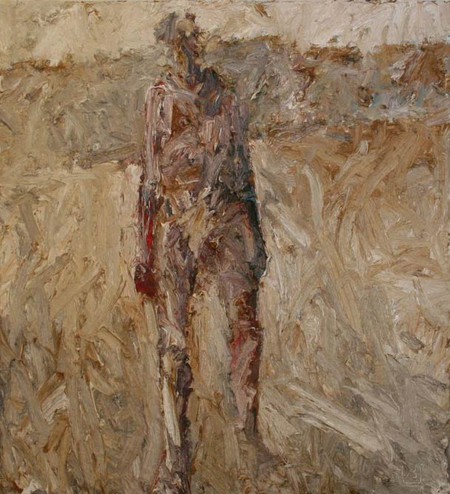 Of Ngapuhi (Maori tribe in North New Zealand) descent, Darryn George’s art is a connection to his heritage through his colour palette and traditional Maori symbols. In what is considered his greatest achievement to date, his work was included in the Personal Structures exhibition at the Venice Biennale 2013. The Folder Room transforms a room based on the humdrum office filing cabinets into a “wharenui-like space of contemplation and reflection.” The folders originally represented a more personal theme: the loss of lives in the Christchurch earthquake in 2011, but Darryn George was please that in an international exhibition they took on other connotations of knowledge, history and information. His limited colour palette of red, white and black rhythms evoke his Maori heritage while the structural qualities and abstraction give the viewer access to an intangible world. 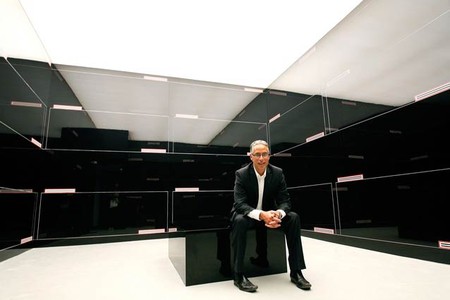 One of the youngest artists on this list, Kushana Bush has already achieved international renown. From her Dunedin home to Edinburgh her art could not be loved over a greater distance. Bush’s figures are loose limbed and dynamic, while the intricate patterns contrast with the subtle variation of hues in her work. When we look at Fool’s End, it become clearer as to why she might have such a Scottish following. The graphic layering and the stylised line are reminiscent of Stanley Spencer and, more recently, Alasdair Gray. As the final work in her Last Song in Silence series, Fool’s End is a particularly apt finish to the social commentaries on frivolity of the other works. 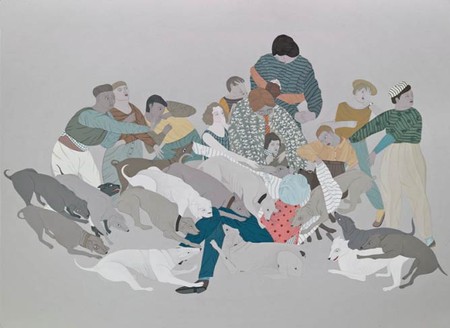 Although Peter Robinson works with a variety of media, his polystyrene sculptures are some of his most renowned works. Promethean Dreams takes the form of roughly hewn polystyrene blocks stacked together and draped in delicate polystyrene chains. Robinson exploits the unorthodox medium to its best showing its delicacy and ice-berg like texture. Robinson’s sculptures may be the only examples of polystyrene dominating a room. At two meters high, Promethean Dreams is as captivating as it is unusual. The sculpture is abstract, but to me it resembles a melting glacial form with connotations of climate change.

Printmaker Jason Greig has a morbid fascination rarely seen in his contemporaries. His works are reminiscent of Blake and Goya with their gothic connotations. As one viewer remarked, “there’s not a lot of sunshine” in Grieg’s art, but that is what makes them so alluring. His slender figures bathed in otherworldly light are dream creatures; half-remembered and not quite there, their world is not our own. While their theme is unsettling, there’s something reassuring about these works. These often pained, sorrowful beings are locked away in their framed worlds, they cannot touch us, nor we them, trapped in their sad and beautiful light.

“What makes up reality? Is reality just a never-ending stream of visual impressions? Can it be that these impressions exist only in our mind? And does this mean we all have our own, purely personal vision of reality?” The philosophical preoccupations of artist, Judy Millar, are at the core of her work. Millar’s work is generally vast in scale, filling a room and entrapping the viewer in her colours and forms. The Rainbow Loop is like a giant pop-art pencil sharpening. The riot of rich jewel color amidst the thick black and stark white amplify the work as only Millar knows how. A work of this size cannot help, but to take your breath away. Judy Millar is the queen of impact installation.

Lisa Black’s taxidermy and ossuary (skeleton) artworks are a contemplation of life, death and transient beauty. Her works have an air of Richard Brautigen’s Machines of Loving Grace with her mechanically modified animals challenging theories of vulgar technology and sacred nature. Fixed Fawn provocatively suggests that nature is imperfect/broken and can be fixed by the application of technology. However, Black does not chose modern components, but antique metal pieces of technology from the era of the industrial revolution. The integration of these carefully selected objects gives them a steampunk air, but also an obscure aestheticism that challenges our perception of art. 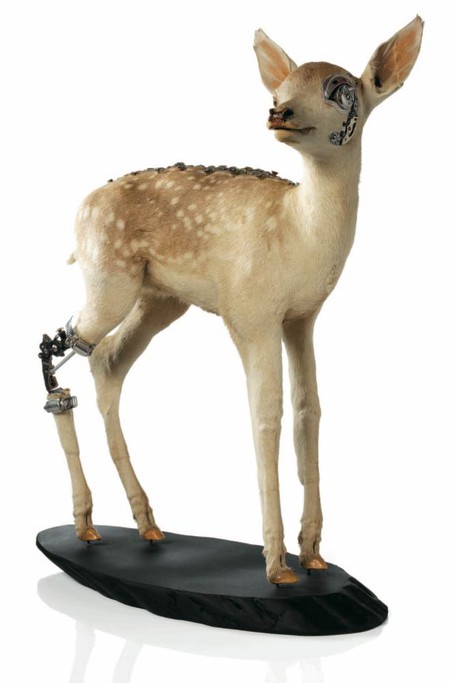 His distinctive palette of teals and turquoise pulsates with life and magic in his painted worlds. It is no surprise that he is so well established as an artist considering the universal humanness of his art. The End holds themes of loneliness, sadness and contemplation in careful measure between lightness and dark. The atmospheric quality of his painting is staggering. He depicts a light not of our world, but likened to the Greek underworld a cool translucency and lukewarm humidity that captures the eye and the imagination. A sub-lunar light dances across the surfaces – soft supple skin, whispering falling water – making a work that is both silent and deafening.