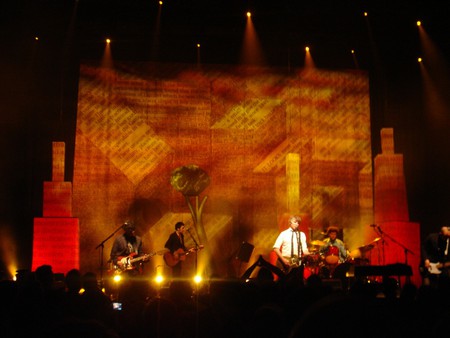 New Zealand has a rich musical heritage, what with the beautiful traditional Maori waiatas and contemporary New Zealand reggae. There are also plenty of excellent bands in New Zealand playing brilliant rock, indie and alternative music. Give your eardrums a treat and take a look at this list of our top ten favourite Kiwi bands. Our selection is pretty eclectic, spans decades of quality New Zealand tunes and includes some bands that have inspired much controversy among New Zealand and their arch-nemesis, Australia.

Dragon was a rock band that was very much a product of the seventies. They formed in Auckland in 1972, and epitomize the very spirit of rock and roll, not just in New Zealand at the time, but globally. Like many rock greats, success was marred with tragedy, and there were several band members who died from drug-related incidents and accidents. Although they relocated to Australia in 1975 to expand their horizons – New Zealand is only little after all – they have always been fiercely defended as Kiwis by New Zealanders. They produced some absolutely classic bar-room ballads such as, Rain and April Sun in Cuba, which can still be heard echoing through the valleys and over the hills of New Zealand at about three in the morning on weekends from every pub in the land.

Auckland-based Opshop became one of New Zealand’s favourite bands during their explosion in 2007 and 2008. They released two multi-platinum albums, You Are Here and Second Hand Planet. The style of music they make and play is very much in the romantic, soft, tear-jerking, yet motivational vein, which on paper sounds a little bit naff, but resonates with a massive demographic. It’s not the sort of music you’d admit to liking if you were a big, burly bloke. However, that same burly bloke would be a liar if he said that he didn’t end up singing at the top of his lungs and tapping his foot if a tune like Maybe came on the radio, and he was alone in his car on the way home from work.

Flight of the Conchords

Well, what can you say about this iconic duo? They somehow filled a niche that no one knew existed, and did it in such a way that they became world-famous and made a successful show in the States. Something that is notoriously hard to do. Comprised of Jermaine Clement and Bret McKenzie, Flight of the Conchords marries outstanding musical talent with unique, dry New Zealand comedy. If you’ve never checked them out before – perhaps because you’ve been living under a rock – then do yourself a favour and do it now. They’re hilarious and unique, and have deservedly put NZ on the map.

The Datsuns rise to fame is your classic tale of high-school band turned full on rock band. They’ve received a lot of attention over the years from the U.S. and U.K. as well as Australia and New Zealand. Their thrashy brand of rock and roll is best viewed live. They play with furious energy, and this saw them crowned as Best Live Band in by NME in the early 2000s. They’ve released six albums, the second of which was produced by Led Zeppelin’s John Paul Johns – an absolute rock legend. They remain a firm favourite in the underground rock scene in the U.K.

Split Enz is one of those bands that emerged in the early 80s that, if they were to appear on the scene for the first time now, would be super cool and super trendy. ‘Indie’ would probably be the label given them. In fact, at the time, they were slightly obscure, but in retrospect they were just ahead of their time, and they left behind a collection of songs that were brilliant examples of alternative pop. They were never massively commercially successful, but gained a large cult following overseas, and were still loved a decade or more after they broke up. Whatever, they were like at the time, they were the first New Zealand band to truly gain international recognition.

Led by the illustrious Dave Dobbyn – one of New Zealand’s most loved musicians, and a man who has been providing the soundtrack to the New Zealanders’ lives for decades now – Th’ Dudes are just an absolutely iconic NZ band. Bliss – basically a song that celebrates the joy of imbibing copious amounts of beer – has become the quintessential drinking song around New Zealand. Every Kiwi, whether consciously or not, somehow picks up the word to this song over the years. It was originally written as a satirical commentary on the drunken audiences that the band had to play to when they started out.

The Phoenix Foundation are an indie-rock band from Wellington. They come across as one of those low-key bands that are genuinely interested in making music above all else. That is to say, they give the impression that they really don’t mind whether they’re playing to four people or 4000, as long as they’re still having a good time doing what they’re doing. That said, they’ve won a heap of awards, including New Zealand Music Awards and Quantas Film and Television Awards for their work on the critically-acclaimed NZ film, Boy, directed by Taika Waititi. Their happy, mystical and feel good songs are perfect for a road-trip in the summertime.

Shihad have been leading the rock scene in New Zealand for 30 years now, and they’re still capable of pulling in huge crowds at their NZ and Australian shows. They’ve been a part of the modern rock scene since the eighties, and haven’t really had to change too much in that time, such is the loyalty of their fan base. They’ve been so successful that they hold the title for most number one records for any New Zealand artist, tied with Hayley Westenra, the classical vocalist. If you want a decent taste of what this band are capable of then have a look at the albums they brought out from 2004 to 2008.

The Naked and Famous

It’s amazing what a talented and driven bunch of musicians can accomplish in just a few years. From their conception in 2007 to about 2011 The Naked and Famous went from an Auckland indie-electronica band to worldwide stars. Their incredibly catchy hit Young Blood took the world by storm and was named by the BBC as one of the sounds of 2011. In 2010 and 2011 they literally cleaned up the awards shows they took part in, missing out on only three awards from the twelve they were nominated for. Young Blood was used in the epic Red Bull snowboarding film, The Art of Flight, and reawakened love for the song. Next up for this band out of Auckland? Continuing a sold out tour through the U.S. and Canada. Grab tickets if you can.

In the eternal and (mostly) tongue-in-cheek rivalry that exists between New Zealand and Australia, no band has attracted as much contention as Crowded House. This band is loved on both sides of the Tasman, and it’s a tricky one to untangle, with two of the members of the Kiwi band Split Enz deciding to form Crowded House. One was Neil Finn and the other was Paul Hester – a Kiwi and an Aussie, respectively. This is where it gets complicated as it was an Aussie and Kiwi from a famous New Zealand band, that formed a new band in Melbourne… Phew! Whatever side you stand on, the boys from Crowded House capitalised on the already established fan-base of Split Enz, and are still one of NZ’s (or Australia’s) most accomplished bands.