Top 10 Things To Do In Taveuni, Fiji

Also known as the ‘Garden Island of Fiji,’ Taveuni is covered with lush rainforest, brimming with colorful flora and fauna, much of which is extremely rare and endemic to the Fijian archipelago. The Bouma National Heritage Park protects approximately 80% of Taveuni’s land, sheltering a series of picturesque waterfalls, rivers, creeks, and canyons, which offer numerous opportunities to swim, climb, and hike in the island’s awe-inspiring surroundings. 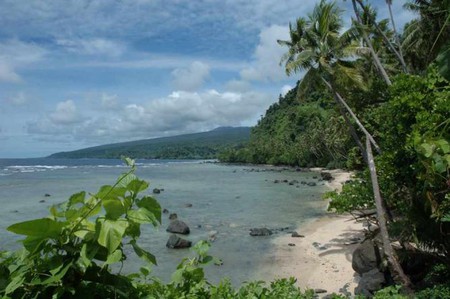 The Lavena Coastal Walk offers an alluring insight into all that Taveuni Island has to offer. Starting on a secluded beachfront sprinkled with rock-pools and small lagoons, its serene pathways navigate an unusual black-sanded volcanic beach and a lush, wildlife-abundant rainforest before passing through the charming Fijian settlement of Naba and crossing the Wainisairi River via a suspension bridge. It finally finishes at the spectacular Wainibau Waterfalls where you can cool off. 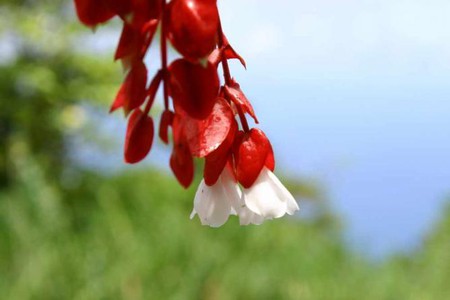 As a place of great geological, biological, and cultural significance, the stunning Lake Tagimaucia has long been one of Taveuni’s most popular tourist attractions. Located in the mountains above Somosomo, Tagimaucia sits in a volcanic crater and is the only place in the world where the beautiful epiphytic flower from which the lake takes its name is found. Legend has it that the crimson and white Tagimaucia — now a Fijian emblem— was formed by the tears of a princess, who was forbidden to marry the boy she loved. 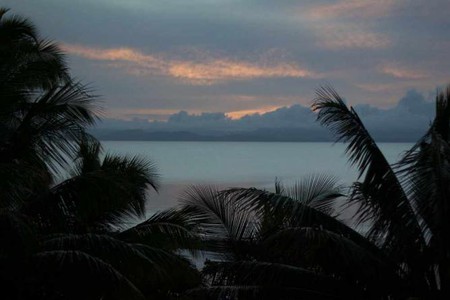 The best views of Taveuni are from Des Voeux, the second highest peak on the island, which stands at approximately 1195 meters. It’s a steep climb, but hiking through the tropical rainforest gives you the chance to see some of Fiji’s wonderful indigenous fauna along the way – and the vistas from the mountain’s summit are utterly breathtaking. On a clear day, it’s possible to see neighboring Vanua Levu, and even the hazy peaks of the Lau Islands too – Fiji’s remote eastern islets. 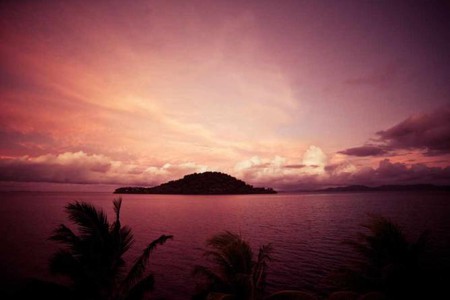 The small islet of Qamea lies just off the coast of Taveuni and is well worth the short detour. Due to its deeply indented perimeter, the island has several wide bays lined with gorgeous white sand, palm-fringed beaches backdropped by emerald-green peaks. Each year, between the months of November and December, Qamea experiences the natural phenomenon of lairo, when thousands of red land crabs migrate towards the sea to mate. 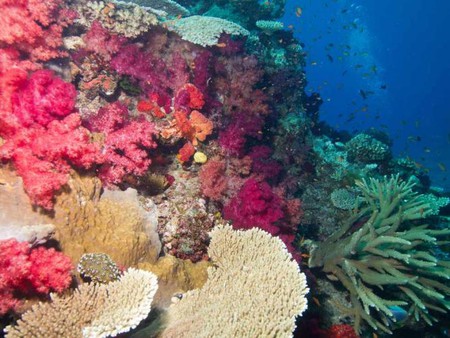 The Somosomo Strait is a channel of water lying between Taveuni and its neighboring island, Vanua Levu, where the marine life is perhaps the most stunning in the entire archipelago. In this spectacular underwater world, a weird and wonderful array of sea creatures can be seen darting between the magnificent fuchsia and vibrant orange corals that blossom in the fast-flowing currents. The strait is also home to some highly unusual formations such as the Great White Wall – an enormous rock formation covered in delicate snowflake-like corals that comes to a sudden, dramatic vertical drop. 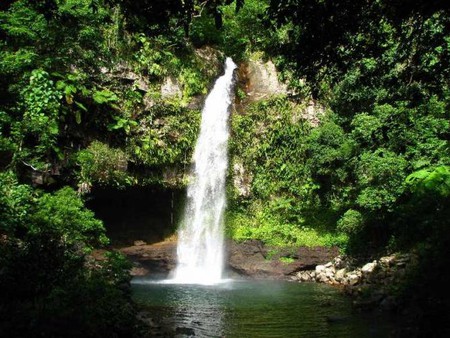 The Tavoro Falls are a series of three waterfalls dispersed throughout the Bouma National Heritage Park. The first of these is easily accessible, whilst the treks to the second and third are more arduous. However, the determined hiker is rewarded with magnificent vistas down upon Taveuni and out across the archipelago from the various look-out points along the way. Each of these magnificent cascades is sheltered by a lush rainforest awning and has a wonderfully cool natural pool, suitable for swimming in. 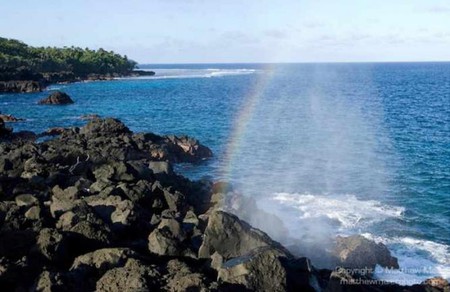 The row of blowholes that line Taveuni’s southern tip are the result of water from the Vuna Reef crashing onto the island’s jagged coastline and rushing into small crevices in the shore’s volcanic rocks. These shallow pits then intermittently spurt water, which sometimes reaches up to 50 meters in height. This unique geological site is particularly dramatic in the wind when gusts sweep the spouting water into a misty white veil.

Enjoy hopping from one day to the next – quite literally – at the International Date Line, which slices straight through Taveuni not far from the town of Waiyevo. A big wooden map of the island, which is cut in two, marks the spot. Although for logic’s sake Fiji officially observes one time zone, Taveuni sits at a longitude of 180 degrees, meaning that west side of the island theoretically exists in one day whilst the east exists in the next.

This narrow creek of cascading water is situated just a 20-minute walk from Waiyevo town and is often used as a waterslide – weather permitting. Ease your way down on your bum to start off with, and if you start to feel a little more confident you can attempt to get up on your feet – the local children like to show you how. You land (a little battered and bruised) in an enchanting pool at the bottom – where some scenes from the 1980 romantic adventure film The Blue Lagoon were shot. 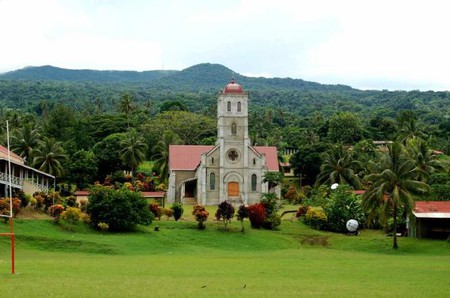 This charming little Catholic church is a fascinating remnant of Fiji’s colonial past. It was built in 1907 in honor of a French missionary who helped Taveuni’s native warriors defeat an army of invading Tongans. Sat upon a grass verge overlooking the Somosomo Strait, this cream-hued stone building dramatically contrasts with Taveuni’s deep-green, mist-veiled peaks in the background. It is as beautiful inside as it is out, with high-beam ceilings and large windows that flood its interior with natural light.
By Hannah Bergin