PACIFIC
/
FIJI
/
Things to Do

The Best Diving and Snorkelling Sites In Fiji 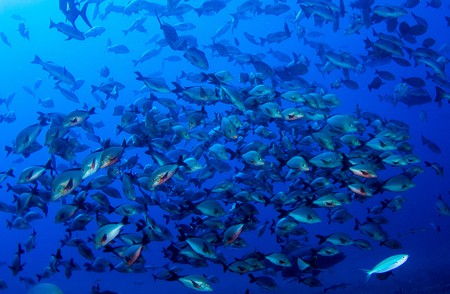 The Fiji Islands are well known for their bright coral reefs, tropical fish and warm, clear waters. Fiji offers year-round diving and snorkelling and the chance to observe not only colourful fish and coral species but also turtles, eels, manta rays and sharks. From calm beaches for first-time snorkellers to thriving marine reserves for experienced divers, the Fiji Islands offer some of the best and most varied action in the underwater world.

The Namena Marine Reserve lies in the waters between the two biggest islands of Fiji, Viti Levu and Vanua Levu. The reserve and coral reef is home to more than 1100 fish species and 400 corals, making it one of the top diving and snorkelling spots across all of the Fiji Islands.

It is an underwater playground for marine life, such as dolphins and humpback whales, and has some excellent snorkelling spots. The reef is healthy and thriving as the area is protected from any fishing.

Natadola is one of the few public beaches on the mainland of Viti Levu, which offers top snorkelling right off the beach. You don’t have to swim far to find plenty of colourful fish darting in and out of the coral crevasses.

The wind can pick up a bit in the afternoons in Fiji, so the best time for a calm sea is in the morning. Look for the turquoise patches in the water to find deep holes in the reef, perfect for freediving into caves.

Scuba divers descend on Beqa Lagoon in Pacific Harbour for one main reason – shark diving. Not just any shark, but dozens of bull sharks at a time, with not a cage in sight. Water visibility can regularly reach up to 40 metres (130 feet) between July and September, making this area the ideal arena to observe one of the more aggressive shark species fight for food right in front of you.

Divers will also spot several other shark species including the occasional tiger shark, as well as barracuda, rays, turtles and even big game fish during the winter months.

This island in the remote Yasawas Island Group gets its name from the regular visitors to the nearby feeding channel. Between the months of May to October, manta rays arrive to feed in the nutrient-rich channel, full of plankton for these giant filter feeders.

Mantaray also has excellent snorkelling just off the beach, as well as a host of other exciting dive spots just a short boat ride away.

The Astrolabe Reef is one of the world’s longest barrier reefs. It stretches around Kadavu Island, a remote and isolated part of Fiji but a haven for scuba divers wanting to experience untouched and thriving marine life. This reef has everything from pinnacles to passages and drop-offs to keep every type of diver occupied.

The reef is home to several large fish species as well as sharks and manta rays. July and August offer the best chance of spotting the oceanic hammerhead.

For those who prefer to stay on the surface, the bays around Kadavu Island offer excellent snorkelling.

This stretch of water has dozens of dive sites from impressive pinnacles rising 900 meters (3000 feet) from the ocean to brightly coloured yellow, purple and pink soft coral, which is why the area is known as the soft coral capital of the world.

A strong current rushes through the area between Fiji’s two largest islands, Viti Levu and Vanua Levu, making it attractive for the thousands of marine species which live in this passage.

This world famous dive site off the island of Taveuni is a wall of soft coral which appear to make up the colours of – yep, you guessed it, the rainbow.

It is located in an area known as the Somosomo Strait, between Taveuni and Vanua Levu, and the best visibility is between July and September. There are plenty of anemones so there’s a good chance divers will spot Nemo, Nemo’s dad and all of Nemo’s extended family. Watch out for barracudas, manta rays, white-tip reef sharks and even leopard sharks.