The Best Delicacies Found In Fiji 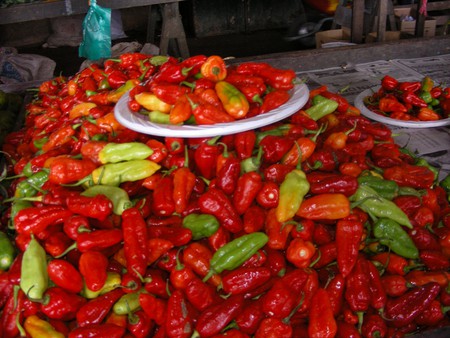 Fiji is known for its rich indigenous culture and beautiful beaches, rather than its food. But browsing one of the many markets on the island reveals a wealth of fresh produce. These ingredients, along with the creativity of Fijian cooking, results in truly diverse and fascinating cuisine.

The basic elements of Fijian cooking consists of sweet potatoes, taro (a yam-like root vegetable), rice, cassava, coconut and fish. The primary cooking methods are either over an open fire or using underground cooking methods. The migration of Indians to Fiji began in the 1870s, when thousands arrived to work in the sugarcane industry. With them they brought new and exciting ingredients from their homeland, and as the cultures merged, a distinctive style of ‘Fijian-Indo’ cooking evolved. For this reason, Fijian cuisine has elements of colorful curries and spices within it, that its neighboring Pacific countries do not. 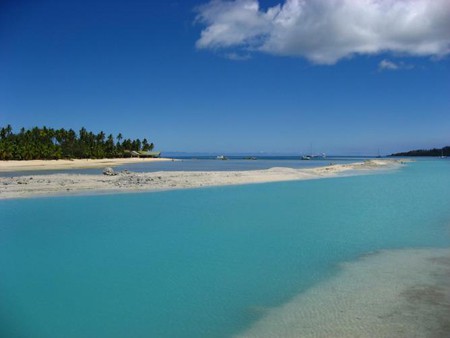 As you’d expect from an island, Fijian food is heavily influenced by the surrounding sea. Traditional dishes include a vast variety of shellfish, seaweed, octopus, sea cucumber, sea urchin, turtle, shark, and of course fish.

A very popular dish that has many variations in the Pacific is kokoda. It is the island’s equivalent of South America’s ceviche, made up of finely chopped raw mahi-mahi fish, dressed with miti – a dressing made from thick coconut cream with onions, lemon/lime juice, salt and chilies. Different Pacific Islands have different variations on this dish, but they all generally involve sharp citrus juice, coconut cream and pieces of fish. The Fijians in particular like their version of kokoda to have a slight kick with some spice from the chilies. Kokoda is a great choice for a starter, as it is very refreshing and cleanses the palate for the following courses. Since the fish is marinated for a long period of time (around six to eight hours), it gets a firm and slightly chewy texture, making for a very satisfying fish dish. In Fiji this meal is traditionally served in a large clamshell or half a coconut shell. 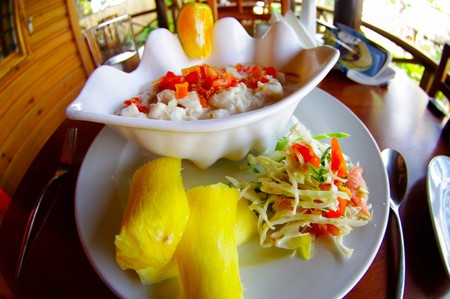 Lovo is a Fijian delicacy that is normally prepared for communal celebrations such as weddings or festivals. The word lovo essentially means a ‘feast cooked in the earth’. The neighboring islands of New Zealand have their own version of this cuisine, known as hangi. A makeshift underground oven is fashioned by digging a hole into the ground and lining it with coconut husks, which are then lit on fire and covered by stones. Meats, fish and vegetables are wrapped in banana and taro leaves, and placed on top of the heated stones that are covered in dirt. This slow cooking method is best left for around two to three hours in order to achieve tender and flavorsome results. The food takes on a delicious smoky flavor due to the leaves and the underground method of cooking. Most large resorts in Fiji put on a lovo night once a week for their guests.

Often called the ‘Fijian Asparagus’, the unique Fijian vegetable duruka is actually the unopened flower of a cane shoot (closely related to sugar cane). It is believed that early settlers brought the plant from Papua New Guinea in the late 1800s, but it is also prevalent throughout coastal areas of southeast Asia and other Pacific islands where it is known as pit pit. Fiji is blessed with both the green and red varieties of the vegetable. Duruka great ingredient that Fijians often add to coconut milk or put in a curry. The red shoot contains a more crumbly, nutty flavor in comparison to the softer green shoot. Both types have a stringy and fleshy consistency and are incredibly tasty.

Taro has been a staple of the Fijian diet for centuries, and its cultural importance is celebrated on Taro Day — a holiday dedicated to the crop that is celebrated on the first full moon in May. Its growth as an export crop begun in 1993 during the taro leaf blight, which decimated the taro industry in neighboring Samoa. Fiji filled this void and was soon supplying taro internationally. Taro is a heavy, potato-like root with a violet hue. This vital ingredient can be mashed and boiled like a potato and cut into fries or chips. The healthier version of steamed taro is a particular favorite of native Fijians. All elements of the vegetable can be used, including the leaves, as mentioned above. Taro leaves can be fried into fritters or even boiled in coconut milk to create a great spinach-like dish. A particularly delicious and flavorsome dish involving taro is kolokasi – a chicken and taro stew. 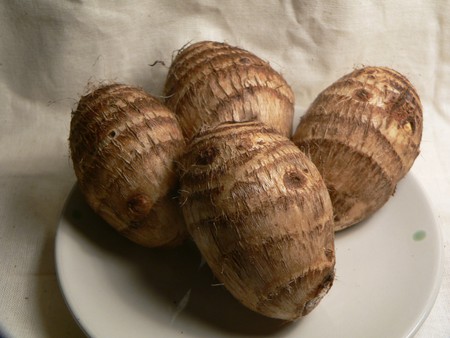 Nama is a type of seaweed or colloquially known in Fiji as ‘sea grapes’. Nama can be found in many locations around Fiji, especially the Yasawa Islands where they are harvested in the shallow waters near the reef. Sea grapes are used differently by other nations, who prefer to cook them as part of a soup or stew, but in Fiji nama is traditionally used as a fresh vegetable – often used as a garnish but also served in a salad or coconut milk. Locals are known to mix them with kora (a fermented coconut paste) along with freshly grated coconut, chili, lemon juice and salt to create a thick paste.