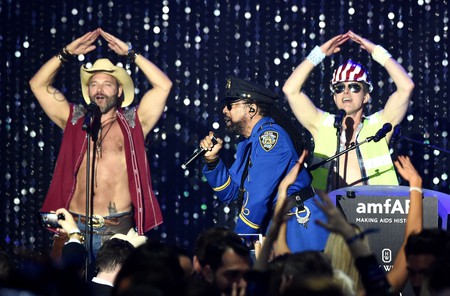 In its near-40 years of existence, Village People’s “Y.M.C.A.” has been embraced in song and dance by people and organizations across the globe. Noticeably absent in acceptance these four decades has been the actual YMCA.

The Christian youth organization was determined to sue Village People after the song’s release in 1978, but, as Felipe Rose, the Native American in the group, told News Limited, “they didn’t own the copyright to four letters.”

However, it seems like the Y is finally down with the disco, or, at least they are Down Under.

On Monday, YMCA Australia teamed up with English singer-songwriter Boy George to rerecord the hit track in support of the the Why Not? campaign.

“We had a big conversation about how we can be a social movement for young people,” Melinda Crole, CEO of YMCA in Australia, told Guardian Australia. “One of the assets we had was the recognisable YMCA song. When you are introduced as working for the YMCA, you always got the arm movements.”

“It was a challenging conversation for us as leaders – the baby boomers and Gen X,” Crole continued. “We have to let go – it wasn’t about what we thought. It was about the young people.”

Currently, same-sex marriage is not legal in Australia, but same-sex couples can have civil unions or registered relationships in most Australian states.

In the past, members of Village People have denied that “Y.M.C.A.” was written with the intent of being a gay anthem, including the group’s former lead singer and lyricist Victor Willis.

“Victor Willis wrote about the YMCA and having fun there, but the type of fun he was talking about was straight fun,” Willis’ publicist Alice Wolf said on his behalf in 2007. “When he says, ‘Hang out with all the boys’… he’s talking about the boys, the fellas… But it’s one of those ambiguous songs that was taken that way because of the gay association with Village People.”

Rose, an openly gay member of the band, reinforced this reality while speaking to HuffPost in 2014.

“To the band? Well first of all, the song was never written about anything to do with gay,” Rose said.

He continued: “In fact, I don’t even know if there really were any double entendres in ‘YMCA.’ Not on ‘In The Navy,’ either. I think you need to read the lyrics again. I think people read things into it. They looked at the masculinity of what we were doing, and then they read between the lines. Victor is straight: he wasn’t writing like that.”

Listen to Boy George’s slowed and stripped down version of “Y.M.C.A.” below.