Why Western Sydney Is the City's Most Underrated Hotspot 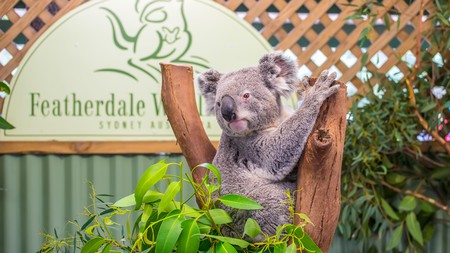 See koalas up close, taste food from around the world, hike some mountains or take ride down a water park slide, all in Sydney's western suburbs | © byvalet / Alamy Stock Photo

Most international visitors to Sydney don’t venture farther west than Newtown. In fact, that statement applies to plenty of Sydneysiders, too. But a long list of theme parks, sporting stadiums, historic pubs and adrenaline-inducing activities means there’s no shortage of reasons to go west – beginning with Sydney’s most diverse food map.

“There’s food to die for out here, and it costs a mere fraction of what you’re spending elsewhere,” says Taste Tours founder Lesley Unsworth, who employs refugees and migrants to guide tourists through the mouthwatering eateries in the western suburbs. “I don’t mind the odd swanky dinner, but I can get so much high-quality food in my local neighbourhood just by knowing which is the hottest of the Afghan restaurants. There’s high migration and a whole lot of businesses stepping up to support that. Western Sydney is the area where most of that first-arrival activity happens.” 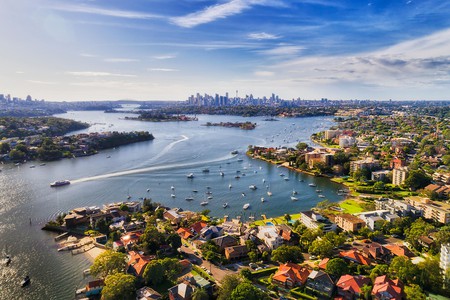 A working-class region that feels like a different city to the glamour of Bondi or the skyscrapers of the Central Business District, Sydney’s rapidly growing western suburbs plate up a more authentic glimpse of Australian life than what most tourists get to see.

“We still have open spaces and areas to show what the Aussie dream has been,” adds Petrina Fielding from Skyline Drive In Blacktown, another Western Sydney must-do. “The West has some of the best features – we have plenty of animal attractions, events, historical buildings, recreational areas, family entertainment and character.”

From football and falafels to water slides and Uyghur cuisine, sink your teeth into the 10 best things to see and do in Western Sydney.

As the place where generations of new arrivals have found a home in Australia, Western Sydney is bursting at the seams with restaurants that are as authentic as they are diverse. “Places like Cabramatta for Vietnamese, Harris Park for Indian, and Merrylands is where the new Afghan and Syrian refugees have settled,” says Granville resident Unsworth. “There is just so much.” Some of his favourites include the iconic charcoal chicken shop El Jannah and the family-owned Hawa and café El Sweetie, both in Granville. Merrylands’ Kabul House, falafel haven Hammoud in Liverpool and Auburn’s Tarim Uyghur are also favourites. But the best way to squeeze in as many eateries as possible is on a Taste Tour of Liverpool (for a taste of the Balkans), Merrylands (Middle East) or Cabramatta (Vietnamese) or an event like the night markets in Lakemba (Lebanese) during Ramadan and Harris Park (Indian) during Holi.

Taste the best Vietnamese food this side of Hanoi

The 50-minute train trip from Central station to Cabramatta transports travellers to one of Sydney’s most intoxicating foodie suburbs. More than one-third of Cabra’s residents were born in Vietnam, and a stroll down the wide footpaths of John Street in the shadow of the Pai Lau freedom gates reveals a gut-busting selection of Southeast Asian eateries among the fabric stores and Asian specialty shops. Phu Quoc’s rice-paper rolls, Tan Viet’s crispy-skin chicken and Thanh Binh’s salads are local institutions.“You can’t go wrong in Cabramatta,” Unsworth says. “Cabramatta is a must-visit place.”

Roll into an old-school drive-in

On top of the mouthwatering multicultural menu, the Skyline Drive In headlines Western Sydney’s expanding list of attractions that should lure visitors outside of the city centre. Sydney’s last remaining drive-in theatre has been in operation since 1963, showing all the latest Hollywood blockbusters under the stars. “It has been recently refurbed with a 1950s American diner and themed menu,” says Fielding. “We’re open seven nights a week and have a trash-and-treasure market here each Sunday.”

Sydney’s biggest and best water park only opened in 2013, but quickly cemented itself as one of the most thrilling days out in the whole city, let alone the West. Usually open from September to April, Raging Waters houses 30 slides, rides and pools including the H2Go Racer (an eight-lane slide where daredevils race their mates head-first), 360 Rush (a gravity-defying loop) and the brand-new Whirlwind (a 206m [676ft] hair-raiser that reaches speeds of up to 25kph [16mph]), built in 2019 when the old Wet ’n’ Wild was rebranded with a new name. “It’s open during the warmer seasons, and it has plenty for the water adrenaline lovers,” Fielding explains.

Watch a game of footy 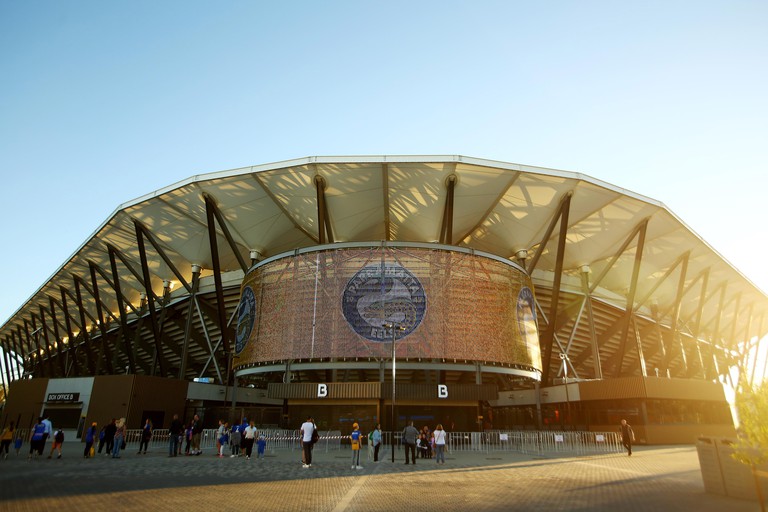 No part of Sydney loves its sport quite as much as the West. Homebush was HQ to the Sydney 2000 Olympic Games, four National Rugby League clubs call the western suburbs home, and an A-League football club – Western Sydney Wanderers – is famous for its fans. Parramatta – the heart of Western Sydney – received a glitzy new $360 million (£184 million) stadium in 2019. But Fielding advises a trip to the Sydney Showground next door to the Olympic Stadium in Homebush to watch the Greater Western Sydney Giants play the quirky code that is Australian-rules football. “I would recommend, if you’re in Australia, to check out the AFL,” she says. “It may seem like a weird game, but it can pack quite a crowd.”

If jumping out of a plane is too terrifying, then thrill seekers can go skydiving much closer to terra firma in Penrith, right next to the Penrith Panthers entertainment complex. A massive wind tunnel creates a bubble of air that feels like tumbling from 4km (2.5mi) above Earth, minus the stomach-churning dread of leaping out of an aeroplane. “Indoor skydiving is great for those wanting a safe and fun experience with the same thrill of outdoor skydiving,” Fielding says. 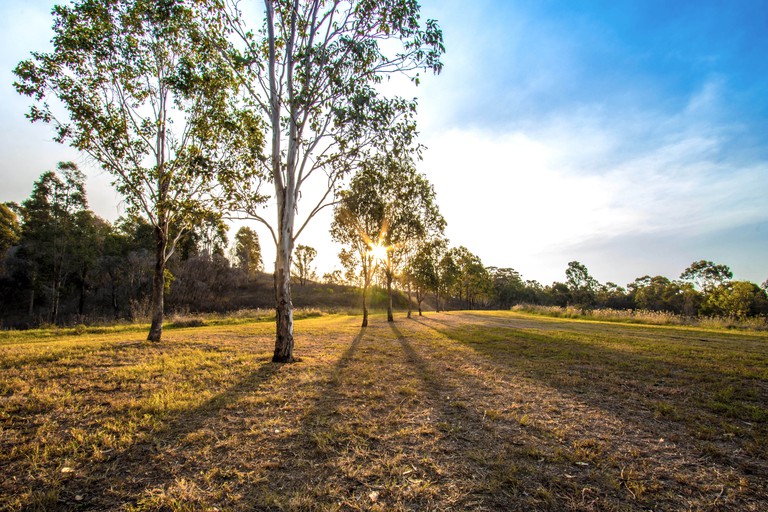 Far removed from the high-rises of the CBD, Western Sydney enjoys plenty of wide open spaces. Bicentennial Park next to the Sydney Olympic complex, the immaculately curated Auburn Botanic Gardens, the epic playgrounds in Fairfield and Casula, and the lawns of Parramatta Park – home to Old Government House, the country residence of the early governors of New South Wales – are some of the best parks in the region. But Western Sydney Parklands – a 13,000-acre (5,260-hectare) system that straddles Blacktown, Fairfield and Liverpool – is Fielding’s top pick. “It’s a massive nature reserve that features picnic areas, walking and cycling tracks and other entertainment facilities,” she adds.

Grab a meal in a heritage-listed hotel

Sitting next door to the Skyline Drive In in the leafy surrounds of Reservoir Road in Prospect, this heritage-listed hotel is packed with more than a century of character. Licensed since 1880, the Royal Cricketers Arms is a quaint spot for a beer and a burger in front of the fireplace in winter or in the jacaranda-shaded beer garden over summer. “This is an original Cobb and Co that is a heritage-listed building,” Fielding explains. “They serve all kinds of dishes and have trivia nights and bands playing on the weekends.” Harry’s Café de Wheels in Penrith, the spooky Settlers restaurant in Mulgoa and the Australian Hotel and Brewery at Rouse Hill are a few of Fielding’s other favourite venues in the West. 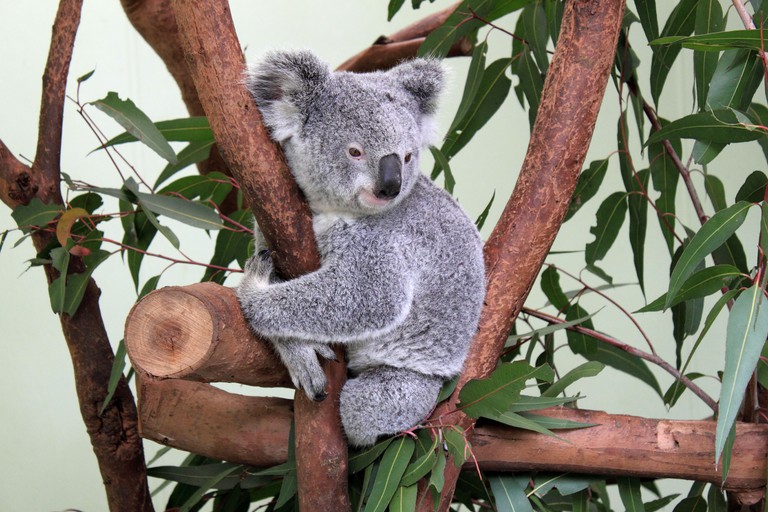 This Doonside zoo is the only place in Sydney where people can hand-feed kangaroos – one thing that’s not on offer at the more high-profile Taronga Zoo on the harbour. Meet wallabies, saltwater crocodiles, cassowaries, quolls, wombats, echidnas, bilbies, owls and more than 1,700 other native Australian animals, including roos and koalas that visitors can get up close and personal with. “Great for plenty of hands-on opportunities with animals,” Fielding says. “Plus great for Aussie animals.”

Take a trip to the Blue Mountains

Past Penrith lies one of the most popular day trips from Sydney: the vast eucalyptus forests of the Blue Mountains. Break up the two-hour drive from Sydney to Katoomba – the hub of the mountains – with stops in villages like Glenbrook, Lawson, Leura and Wentworth Falls, which boasts stunning three-tiered waterfalls. Then, after admiring the view of the Three Sisters from Echo Point, head to Scenic World, where the world’s steepest passenger train is just one way to experience this mighty forest. “Scenic World has four ways to enjoy the World Heritage-listed Blue Mountains,” Fielding says. “Scenic Skyway, Railway, Walkway and Cableway.”