Why the Boomerang is Australia’s Iconic Symbol 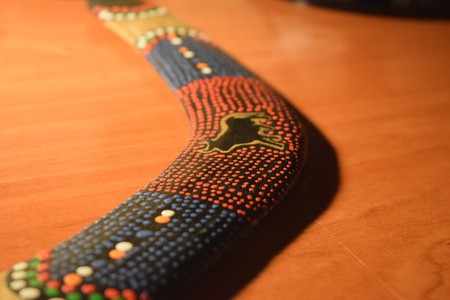 Visitors to Australia cannot miss the sight of a boomerang, the colourfully painted angled throwing stick you spot in every gift shop. But the boomerang has a much deeper significance than the fluffy toy koalas, crocodile skin wallets and tea towels adorned with pictures of native birds it sits alongside at those airport souvenir stalls — especially to Indigenous Australians. 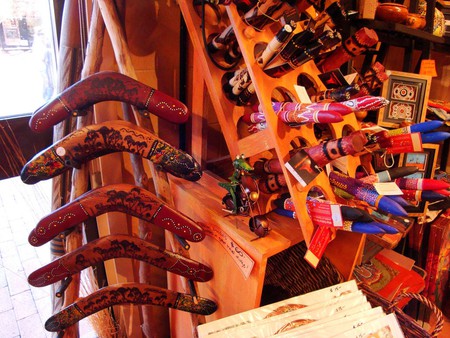 The boomerang represents Indigenous people’s 60,000-year links to this land, because they’ve been used for as long as Indigenous nations have thrived on the Australian continent. Boomerangs play a key role in Aboriginal mythology, known as The Dreaming — mythical characters are said to have shaped the hills and valleys and rivers of the landscape by throwing the sticks around in the hunt.

Evidence of how boomerangs were used can be found in 20,000-year-old rock paintings in the remote Kimberley region of north-west Western Australia, and a 10,000-year-old boomerang was even discovered in a peat bog in South Australia in 1973. Like many Indigenous words that have made their way into Australian English — kangaroo, didgeridoo, billabong, the list goes on — the origins of its name are disputed, although the word ‘boomerang’ is believed to be an adaptation of the word ‘wo-mur-rang’ used in a now-extinct Aboriginal dialect. 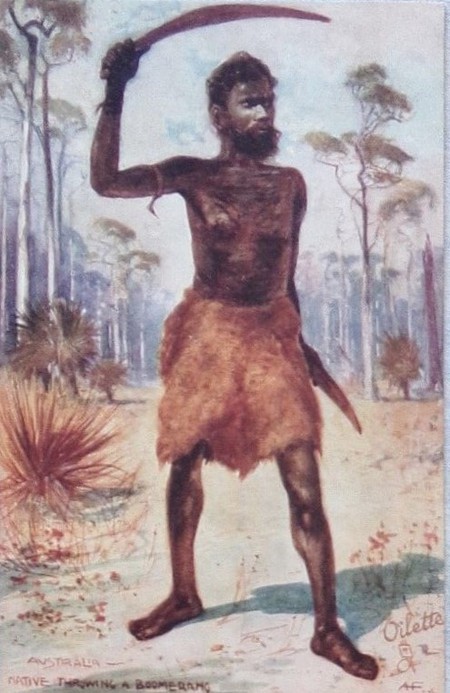 Coming as small as 10cm or as large as 1.8m, they were used primarily as a hunting tool used to mow down prey from distances as far as 100m, lopping down kangaroos by the legs or emus by the neck or fish by slicing through the water. They were also used as tools to dig into the earth or to start fires, as weapons in hand-to-hand combat, or as musical instruments in cultural ceremonies.

The rich diversity of the continent’s 200-plus Indigenous nations, combined with the huge variety of uses, meant that the style of boomerangs varied greatly. They tended to be lighter on the coast than in the desert, and more ornately decorated if they were used as weapons in war. Returning boomerangs — like the ones you would use to float above a flock of birds as a decoy, simulating a bird of prey — needed curved aerofoil wings to whip back around to the thrower, whereas non-returning boomerangs — the type you’d use to peg at a marsupial — were flatter, heavier, and more symmetrical. 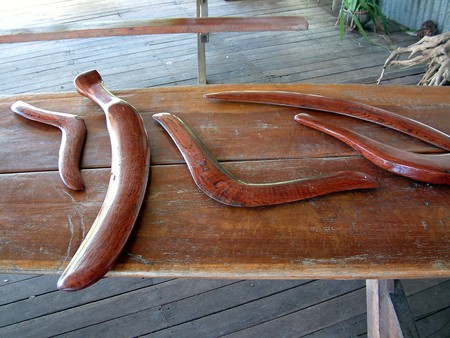 These different types were traded between groups prior to the arrival of the British in 1788, and this trade continued after colonisation. Boomerangs have been sold to tourists since way back in the 19th century, and their popularity as a souvenir explains why — despite historical evidence that similar throwing sticks were used in India, the Americas, Egypt and Stone Age Europe — the boomerang has developed into such a powerful international symbol of Australia.

Brands have never been shy to take advantage of the boomerang’s uniquely Australian identity — since the 1800s, the ancient implement has been exploited to market butter, flour, cigarette papers, brandy, and even an airline in the 1950s, promising to get “there and back” safely.

Despite becoming a powerful icon of Australia, this commercialisation of the boomerang’s image has been controversial. The boomerang-brandishing ‘Pelaco Bill’ caricature used to advertise a line of shirts between 1911 and 1950 is an embarrassing racist stereotype, and as recently as May 2017, luxury fashion label Chanel was slammed for cultural appropriation when they released a resin and wood boomerang emblazoned with their logo, retailing for $1325. 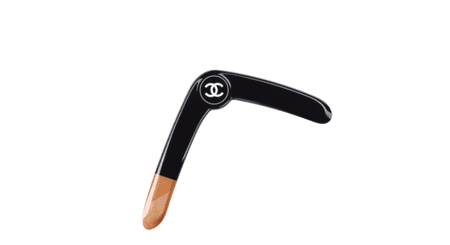 Mass produced dot-painted boomerangs are found in every tacky souvenir shop around tourist precincts like Circular Quay in Sydney and Flinders St Station in Melbourne, but if you’re interested in discovering authentic Aboriginal boomerangs, head somewhere like the Bunjilaka Aboriginal Cultural Centre in Melbourne or the Yiribana Aboriginal and Torres Strait Art Gallery in the Art Gallery of NSW.

A boomerang makes a great souvenir because it slips easily into your suitcase and also celebrates the oldest living culture in the world, but make sure you buy a traditional hand-painted one from a small gallery or studio that supports their local Indigenous community.