Where To See Kangaroos in Australia 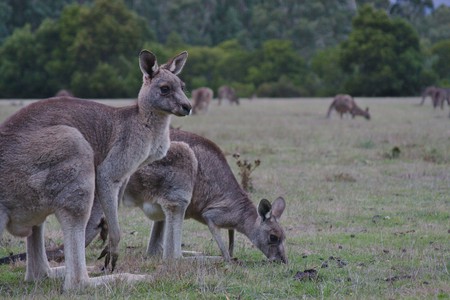 Kangaroos are probably the most well-known Australian animals. They’re featured on the Australian coat of arms, and are found across Australia. Kangaroos like open grassy spaces, so head out of the city and you’re nearly guaranteed to see a kangaroo or two. This guide details some of the best (and most beautiful) places to see kangaroos in the wild, and at wildlife sanctuaries in Australia.

Located on the New South Wales south coast, Murramarang National Park and its surrounds are kangaroo hotspots. Firstly, find any grassy area within the national park and you will potentially find a kangaroo. Then check out Pebbly and Pretty Beaches, where eastern gray kangaroos like to laze on the sand in the evening. There’s also the beaches at Jervis Bay, located north of the national park; and Honeymoon Bay near Currarong.

Bonorong Wildlife Sanctuary is located just outside of Hobart in Tasmania. They operate Tasmania’s largest 24/7 Wildlife Rescue Service, and their aim is get all healthy animals back into the wild. At Bonorong, your entry fee is going right back into helping these animals. The best part about Bonorong is you can walk amongst the kangaroos in their large outdoor home. Visitors can also buy food and feed the kangaroos directly, which is an unforgettable experience. 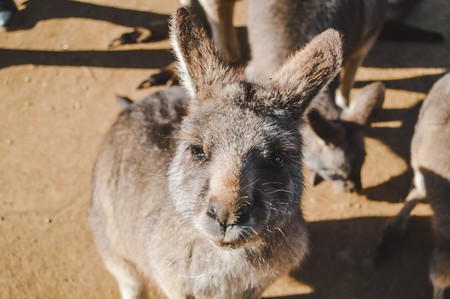 Up close to a kangaroo at Bonorong | © Hayley Simpson 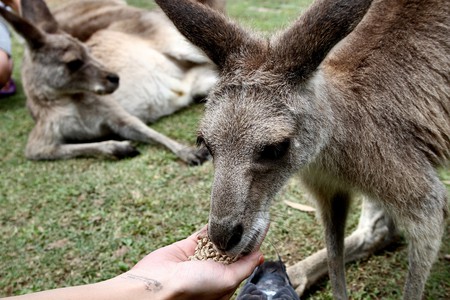 Lucky Bay is located within Cape Le Grand National Park near Esperance, on Western Australia’s south coast. This region is known for having some of Australia’s best beaches, and Lucky Bay is one of them. Its turquoise waters and white sand are inviting for both humans and animals. Western grey kangaroos enjoy lazing on the beach, which stretches for five kilometres (3.1 miles). Visitors can also spot migrating whales throughout the year from the coastal walks surrounding Lucky Bay.

Yes, the name is true. Kangaroo Island is home to plenty of kangaroos. Located off the coast of Adelaide in South Australia, one-third of Kangaroo Island is protected by national parks, conservation parks, and reserves. This means there’s a lot of open spaces for kangaroos to roam free, including Lathami Conservation Park, Flinders Chase National Park, and Grassdale in Kelly Hill Conservation Park. Due to the amount of kangaroos being hit by cars (an unfortunately common occurrence across Australia), many hire car companies won’t allow visitors to drive their vehicles on Kangaroo Island between dusk and dawn. 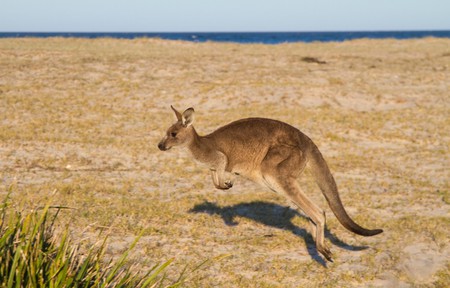 Australia’s capital city has the country’s highest concentration of kangaroos. This means that if you want a guaranteed sighting of a kangaroo in Australia, head to Canberra. The top locations around the city and within Australian Capital Territory to spot kangaroos include Mount Ainslie, Namadgi National Park, Tidbinbilla National Park, and the Governor General’s house. Government House is set on 54 hectares of parkland, so kangaroos love it there. 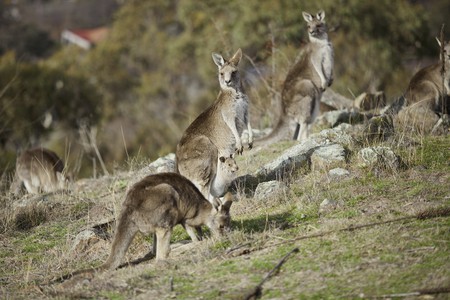 Parks and Wildlife Services Tasmania says Narawntapu National Park is often referred to as the “Serengeti of Tasmania,” due to the abundance of wildlife that can be spotted. The national park consists of headlands, islands, wetlands, lagoons, and dunes. Forester kangaroos call the national park home, and are usually found grazing on grass in the evening. Other animals visitors might see include wallabies, wombats, and tasmanian devils (if they’re lucky).

The Great Ocean Road is not only one of Australia’s most scenic drives. There are also a few locations along the way that are home to high populations of eastern grey kangaroos. Firstly, check out Anglesea, as kangaroos love to congregate at the local golf course. So much so that Anglesea Golf Club runs guided roo tours on weekdays. Then there’s Bells Beach. At the other end of the Great Ocean Road is Tower Hill Wildlife Reserve, too. Here you can spot kangaroos and a lot of other wildlife as well. 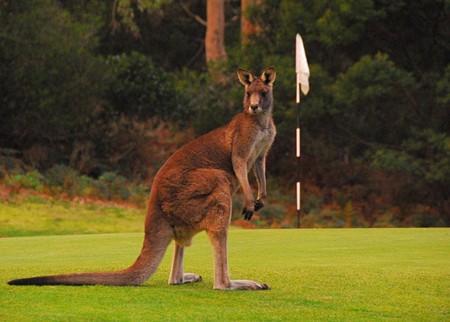 Eastern grey kangaroos are the species you will find across Grampians National Park in regional Victoria. While exploring the national park, you’re bound to come across quite a few kangaroos, so take care when driving between dusk and dawn. There are also plenty of kangaroos that enjoy roaming around Halls Gap, which is the national park’s main town.

Woodlands Historic Park is located next door to Melbourne’s Tullamarine Airport. So step off the plane and straight into seeing some eastern grey kangaroos in their natural habitat. The 700-hectare park is also home to wallabies, echidnas, many bird species, and bandicoots. There are many walking and biking trails, so it’s a great day trip option from Melbourne too.