Where To Find The Best Views Of Melbourne

Melbourne’s sweeping city skyline is one of the most spectacular in Australia, but city-dwellers often spend so much of our time burrowed within the streets and nestled in offices that we forget to take in the view. From soaring observation decks to rooftop bars and sea-level perspectives Culture Trip has located the places which offer the most impressive views of Melbourne.

Celebrating their 30th anniversary this year the Rialto Towers have long been a part of Melbourne’s cityscape. The taller South Tower is the seventh tallest building in Australia at 251 meters, while the North Tower stands at 185 meters. In July 1994, Melbourne’s first public observation deck opened on the 55th floor but closed in December 2009 to make way for Shannon Bennett’s eco-conscious restaurant Vue de Monde which offers world-class dining with dazzling views. If you can’t wait until dinner for the views then head to Rialto’s The Lui Bar for a sophisticated sip with spectacular city views.

One of the most picturesque views of Melbourne is seemingly worlds away from the city centre—40 kilometres to be exact. Mount Dandenong’s SkyHigh looks out to the eastern suburbs and, on a clear day, you can spot the city skyline, Mornington Peninsula, Port Phillip Bay and the You Yangs out West. While visiting SkyHigh you can dine at the restaurant or café, escape the hedge maze, wander through the English Garden, take a hike or discover the Wishing Tree and Percy Possum’s House. 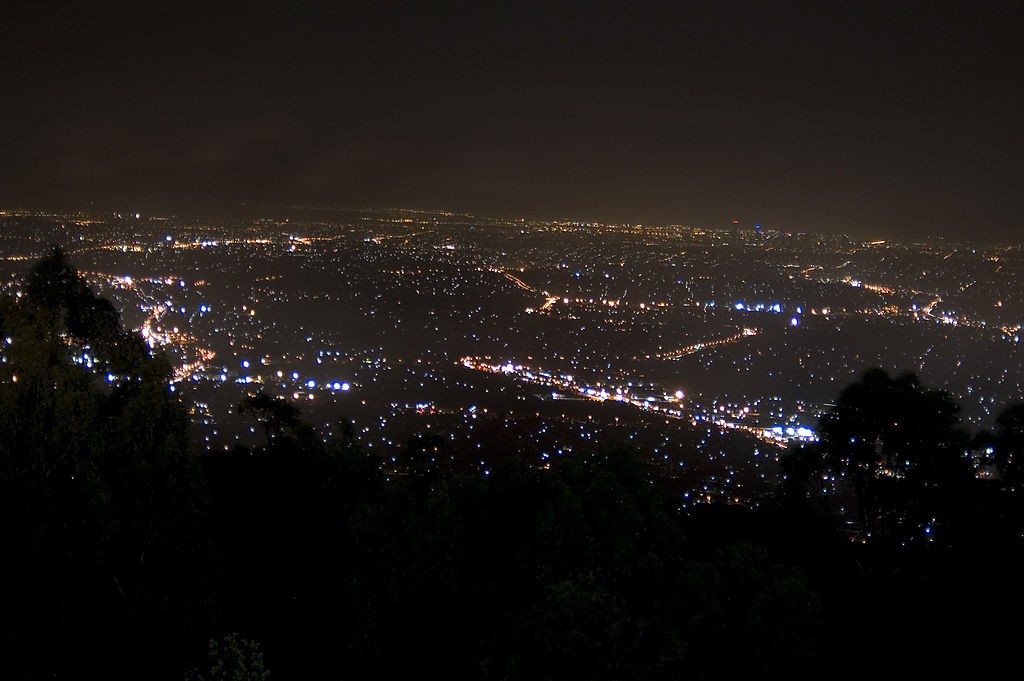 Bar, Tapas, $$$
City views from Naked in the Sky | © Naked in the Sky
Sure, you may have to stand in line for the elevator but, trust us, the views from Naked in the Sky are worth the wait. Located in Fitzroy, directly above Naked for Satan, the views from the terrace stretch 180˚ from the city on one side to the northern suburbs on the other side. Nowhere else can you eat baked camembert and listen to smooth jazz while watching the sunset over the distant Dandenong mountains.
More Info
Open In Google Maps
285 Brunswick Street, Fitzroy, VIC, Australia
+61394162238
Visit website

Brightly coloured bathing boxes draw tourists and locals to Dendy Street Beach in Brighton, but turn away from the 82 huts and you’ll see Melbourne’s cityscape in a new perspective. Unlike the beach boxes which will set you back $200,000, the panoramic skyline view of Melbourne is free to enjoy and is one of the best places to spend a hot, New Year’s Eve night. Keep your eyes on the view as you take a swim before watching the sunset over the city.

When it opened in 2006 Eureka Tower was the tallest residential building in the world; however, it wouldn’t be fair if the breathtaking views could only be enjoyed by tenants. Luckily for us, in May 2007 the Skydeck opened on the 88th floor offering 360˚ views of Melbourne. The observation deck takes 38 seconds to reach by elevator, and those seeking a thrill can step out onto ‘The Edge’ — a three-meter glass cube that suspends groups of people 300 meters above Southbank. 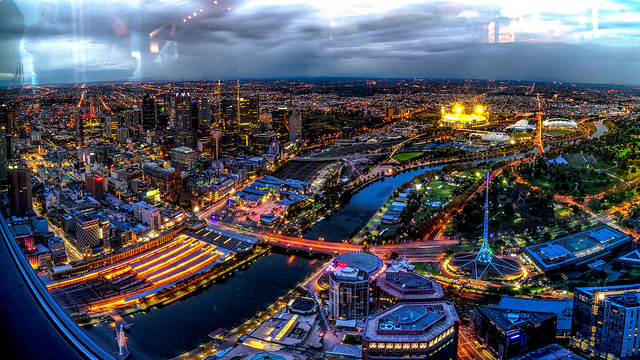 Architectural Landmark
© Takatoshi Kurikawa / Alamy Stock Photo
Book Now
While some views can become stagnant, one attraction in Melbourne provides an ever-changing experience. Described as ‘the Southern Hemisphere’s only giant observation wheel’, the Melbourne Star in the Docklands is 120 meters high and has 21 cabins which allow you to take in the shifting views as the wheel completes its 30-minute rotation. From the central business district to the docking ships at Port Phillip Bay, to Mount Macedon and Arthur’s Seat, Melbourne Star offers a different perspective on the city each time you visit.
More Info
Open In Google Maps
101 Waterfront Way, Docklands, Victoria, 3008, Australia
+61386889688
Visit website

One of the most impressive views of Melbourne is on Ponyfish Island, located under the Yarra Pedestrian Footbridge. Accessible by a single stairwell, this floating bar allows you to gaze up at Melbourne’s skyline from water level. Sit on one side of the bar and you’ll find views of Flinders Street Station, the Rialto Towers and both 120 and 101 Collins Street buildings while Southbank and Crown can be seen on the opposite side.

Bar, Pub Grub, $$$
Cinema - Rooftop Bar | © Alpha/Flickr
Situated above Curtin House, Rooftop Bar will have you working up a sweat as you ascend the stairs and, only once you’ve earned it, the view will unveil itself. In the summer, Rooftop Bar transforms into an outdoor cinema where you can pull up a deck chair and enjoy new release and cult films surrounded by glistening city lights in the heart of Melbourne, but the bar and the views can be enjoyed year-round from midday to 1am seven days a week.
More Info
Open In Google Maps
Curtin House, 252 Swanston Street, Melbourne, Victoria, 3000, Australia
+61396545394
Visit website
Book with our partner and we will earn a small commission.