Via Pixabay
As the balmy nights of summer approach, it’s time to vacate stifling city bars and head to St Kilda where you’ll find alfresco terraces, grungy music venues, and quirky bars. From 29th Apartment to The Espy, Captain Baxter and Misery Guts, allow this list to tempt you with locally sourced beers, exotic cocktail menus and pub grub. These are the top six bars to try in St Kilda, Melbourne.

Bar, Italian, Australian
29th Apartment | Image courtesy of 29th Apartment
Furnished as a recreation of the apartment that St Kilda street walker and scandalous oil painter Katishe lived in, 29th Apartment is styled as an urban New City home, complete with a retro television playing cult classics, games such as Jenga and Connect Four, a bathtub filled with beanbags and a toadstool area. There are more than 100 spirits to choose from and if dancing isn’t your thing, there’s a Creature from the Black Lagoon pinball machine complete with all the bells and whistles. Katishe may have mysteriously disappeared in the ’80s, but you’ll remember this bar experience for a lifetime.
More Info
Open In Google Maps
29 Fitzroy Street, St Kilda, Victoria, 3182, Australia
+61385060765
View menu
Visit website
Visit Facebook page
Send an Email
Give us feedback

Bar, Australian, Cocktails, Wine, Beer, $$$
Misery Guts is a newly opened kitsch bar with an affinity for eccentric quotes, including ‘Disperse or we use tear smoke’ and ‘Misery loves company’ slain across the mismatched furniture. The bar holds local beers, many of which you’re unlikely to have tried before, a short but intriguing wine list and a range of cocktails. The lack of kitchen means that Misery Guts has only a handful of snack options to nibble upon, but let’s be honest it’s the drinks that keep Melburnians coming back.
More Info
Open In Google Maps
19 Grey Street, St Kilda, Victoria, 3182, Australia
+61385906431
View menu
Visit website
Visit Facebook page
Send an Email
Give us feedback

The Esplanade Hotel in St Kilda opened in 1878 and quickly established itself as a prominent Melbourne venue with guests such as Mark Twain. Once upon a time, the Espy was the center of Melbourne’s disco scene, with a Saturday Night Fever dance floor, but these days the venue is better known for supporting emerging rock acts and, with free entry most nights, you may just catch the next big act. The Espy has also been home to music trivia show RocKwiz since 2005. 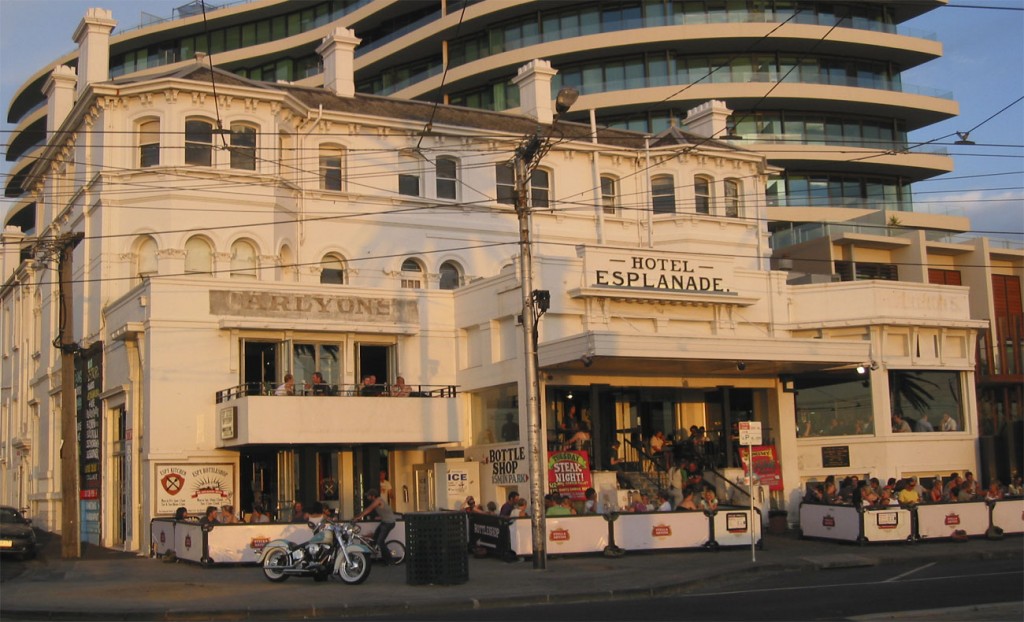 The Elephant and Wheelbarrow

Bar, Pub, Australian, Cocktails, Wine, Beer
Opened in 1998, this British pub in the heart of St Kilda holds a wide range of international beer, local wines and serves traditional English pub grub. On Thursday, Friday and Saturday The Elephant and Wheelbarrow presents live music in the form of cover bands, solo artists and acoustic sets. The venue also televises sporting events. With traditional décor, a wide range of drinks and hearty menu The Elephant and Wheelbarrow is a must-visit Melbourne bar.
Looks like it's closed Hours or services may be impacted due to Covid-19
More Info
Open In Google Maps
169 Fitzroy Street, St Kilda, 3182, Australia
+61395347888
View menu
Visit website
Visit Facebook page
Send an Email
Give us feedback

Bar, Nightclub, Australian, Cocktails, Wine, Beer
Prince of Wales, including The Prince Bandroom, has hosted local and international acts for over 75 years, including Lenny Kravitz, Jack Johnson, The Scissor Sisters, Ben Harper, P!nk, Coldplay, Bright Eyes and Goldfrapp. You’ll find cheap drinks at the bar starting with $3 pints, while Prince of Wales also serves cheap meals during the week and a $15 Sunday roast. Whether you want to wine and dine or listen to the best in live music in an intimate setting, Prince of Wales is one of the best watering holes in St Kilda.
More Info
Open In Google Maps
29 Fitzroy Street, St Kilda, Victoria, 3182, Australia
+61395361168
View menu
Visit website
Visit Facebook page
Send an Email
Give us feedback
Give us feedback