Top 10 Things to Do in Australia's Northern Territory 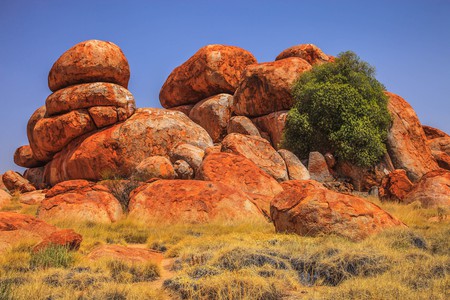 Trying to choose the best attractions to see in a state as big and remote as the Northern Territory is difficult. Fortunately, we’ve compiled a list of the best things to do in the territory, which includes its most beautiful national parks.

The reason most people head to the Northern Territory is to see Uluru (also known as Ayers Rock) and Kata Tjuta (the Olgas) in Uluru-Kata Tjuta National Park. Uluru is a large and ancient sandstone rock formation that’s said to be over 600 million years old. It’s a sacred site for the Pitjantjatjara Anangu, the local Aboriginal people. It’s also an UNESCO World Heritage Site. Kata Tjuta is a group of domed rock formations located about 25 kilometres (16 miles) from Uluru. Learn more about Uluru’s importance through a cultural experience with a local Anangu guide. 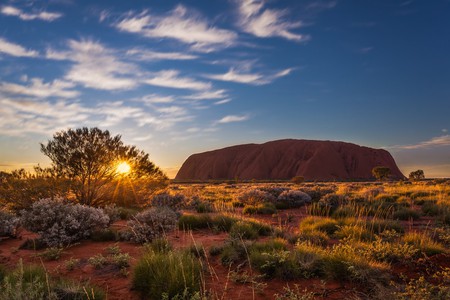 Kakadu National Park is located about 2.5 hours from Darwin. It’s nearly 20,000 square kilometres (7,722 square miles) in size, which makes it Australia’s largest national park and the size of Slovenia. The national park is a designated UNESCO World Heritage Site as well, due to its cultural and natural importance. It’s home to important Aboriginal rock art sites that are over 20,000 years old, as well as more than 2,000 plant species, a quarter of Australia’s freshwater fish species, and 280 bird species. Go on a cruise to see crocodiles, take a dip at Gunlom Plunge Pool and watch the sunset from Ubirr. 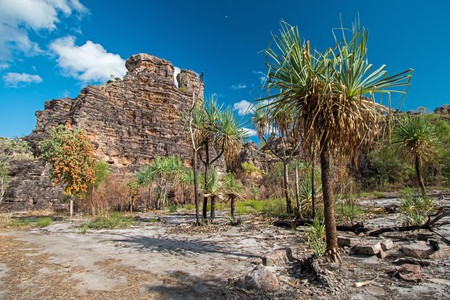 Litchfield National Park is a favourite day trip among Darwin locals. Go for a swim in the crystal clear waterholes underneath Florence and Wangi Falls, or Buley Rockhole. Discover the magnetic termite mounds. Adventurers can explore Litchfield National Park via the 39-kilometre (24-mile) Tabletop Track. There’s also the Lost City at Litchfield, which is a collection of unusual rock formations. 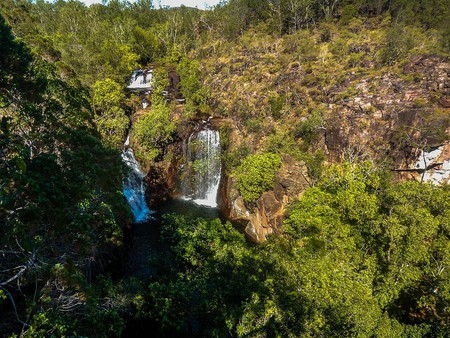 Crocodiles are synonymous with the Northern Territory. See them up close from the comfort of a boat on the Adelaide River. There are several jumping crocodile cruises operating on the river, which make for the perfect day trip from Darwin. With large chunks of meat dangling from a pole, the crocodiles jump high for their meal right in front of you. It’s an authentic experience that needs to be done when in the Northern Territory. 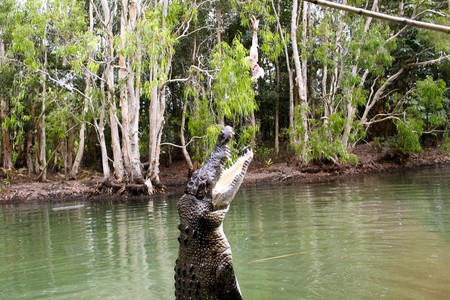 Get your adrenaline pumping at Crocosaurus Cove 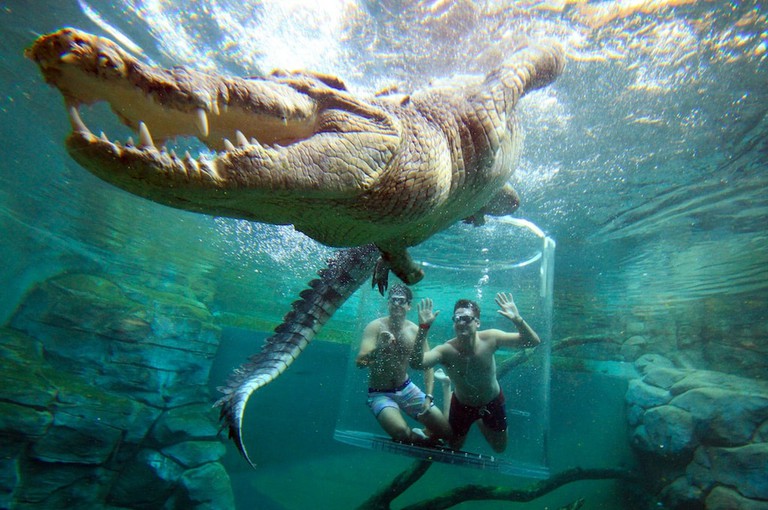 The Cage of Death | © Crocosaurus Cove
Speaking of crocodiles, another way to get even closer to them is via the Cage of Death at Crocosaurus Cove. Australia’s only crocodile dive, the cage is submerged in the crocodile enclosure, where perspex is the only thing between you and a five-metre long saltwater crocodile. Crocosaurus Cove is also where you will find the world’s largest display of Australian reptiles, a 200,000-litre freshwater aquarium, and where you can hold a baby crocodile.
Open In Google Maps
58 Mitchell Street, Darwin, NT, Australia
+61889817522
Visit Website
Give us feedback

Nitmiluk National Park’s northern edge borders Kakadu National Park. The park’s custodians are the local Jawoyn people, as its gorges and landscape hold ceremonial significance. Katherine Gorge, which is carved from ancient sandstone, is the main attraction. It consists of 13 gorges and there are many companies that offer cruises to the fifth gorge. Other activities to enjoy in Nitmiluk National Park include swimming at Leliyn (Edith Falls), visiting Baruwei Lookout and walking the 58-kilometre (36-mile) Jatbula Trail. 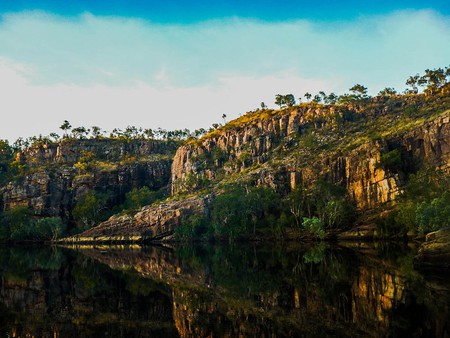 Watarrka National Park is known for Kings Canyon, which features 100-metre high red sandstone walls and desert views. The best way to see Watarrka National Park is via the six-kilometre (3.7-mile) Kings Canyon Rim Walk. Otherwise, take to the sky on a scenic helicopter flight with Kings Creek Station. For an unforgettable dining experience, there’s Under a Desert Moon at Kings Canyon Resort. This features a five-course dinner made from the best locally sourced produce. 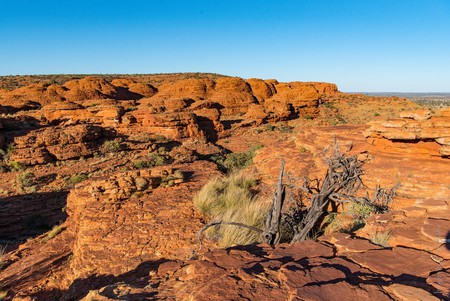 The Devils Marbles are located within the Karlu Karlu/Devils Marbles Conservation Reserve, which is approximately an hour’s drive south of Tennant Creek. It’s the meeting place of four different Aboriginal language groups: the Alyawarre, Kayteye, Warumungu and Warlpiri people. The Devils Marbles are a scattering of granite boulders, which range in size and balance precariously on top of one another. The best time to see the Devils Marbles is at sunrise or sunset.

West MacDonnell National Park stretches along the MacDonnell Ranges, west of Alice Springs. The ranges were depicted in several Albert Namatjira paintings. Go for a swim at Ellery Creek Big Hole or Ormiston and Redback Gorges; spot resident wildlife at Simpsons Gap; walk through Standley Chasm; and visit the Ochre Pits. The pits’ vivid colours have been used by the local Aboriginal people for centuries, for painting and ceremonial body decoration purposes. 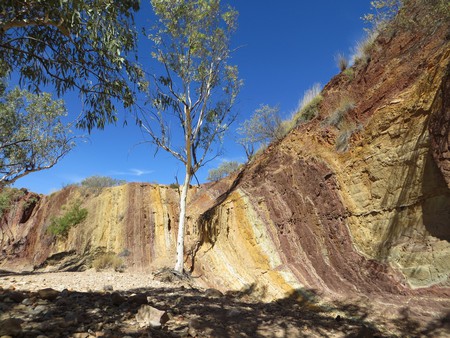 See the sunset from Mindil Beach

Mindil Beach is located in Darwin and is known for both its sunsets and seasonal markets. The Mindil Beach Sunset Markets occur in the dry season on Thursday and Sunday evenings. Over 300 stalls sell everything from international cuisine to Aboriginal artwork to handmade jewellery. But if you happen to visit Darwin in the summertime, Mindil Beach is still certainly worth a visit. 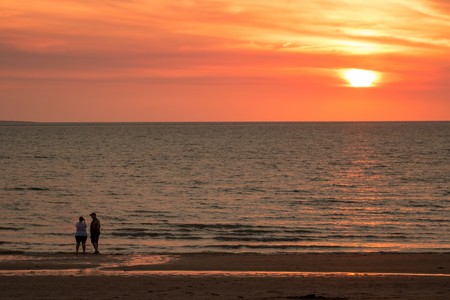