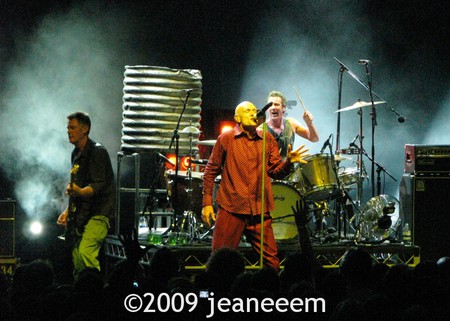 Australian bands have produced some of the most memorable tunes of all time; from rock to punk, from pop to grunge, these bands will forever be a part of Australia’s rich cultural tapestry for their incredible chart-topping hits and award-winning albums. Here are our picks for the most iconic musical acts to have ever emerged from Down Under.

Forming in the 1970’s, this rock band became popular through their vulgar lyrics of sex, drugs and rock and roll. AC/DC is arguably the most popular band from Australia and one of the most popular rock bands in the world. Despite never achieving a single Top 20 hit in America, they still managed to sell albums, which consistently went platinum. Highway to Hell (1979) is arguably their masterpiece and the work for which the band achieved legendary status. In the midst of their growing worldwide success, Bon Scott, AC/DC’s lead vocalist, died and was subsequently replaced with English-born Brian Johnson. Johnson helped them regain commercial success and a place in the annals of rock music. Recently, due to vocal problems, Johnson has stepped away from touring with the band, with Axl Rose, the frontman for Guns N’ Roses, stepping in as AC/DC’s new lead vocalist.

Crowded House was formed in Melbourne in 1985 with members Neil Finn, Paul Hester, Nick Seymour and Tim Finn (Mark Hart and Matt Sherrod joined later). Between 1985 and 1996, they had numerous hits including Don’t Dream It’s Over, Something So Strong, Fall At Your Feet and Weather With You. Due to their popularity in Melbourne, the Melbourne Museum for Performing Arts now displays a Crowded House exhibition, containing assorted collectibles and memorable items of the band.

In September 1979, INXS made its performing debut at the Oceanview Hotel in Toukley, Australia. In 1980, they released a self-titled album, which led to the band performing 300 shows around Australia. By 1983, they had gained worldwide success, cemented with singles like The One Thing and What You Need. The album Kick received many awards and the band promoted it with a 16-month tour around America. Tragically, lead singer and sex symbol Michael Hutchence fatally overdosed in a Sydney hotel room in 1997. INXS sporadically performed with guest vocalists before calling it a day for good in 2012. However, they will always be considered one of Australia’s foremost musical exports.

Midnight Oil brought political and social injustices into the cultural mainstream through their music and lyrics. The band formed in 1972 with members Andrew “Bear” James, Jim Moginie, singer Peter Garrett and Martin Rotsey. With their manic and urgent sound, the band became popular for their uniqueness and stagecraft. Between 1976 and 2002, Midnight Oil played shows 200 times a year around the pubs, clubs and theatres of Australia, while also touring in the US. Since breaking up, the band have remained one of Australia’s most beloved cultural institutions. Amongst many hits, both Power And The Passion and Beds Are Burning were listed by the Australasian Performing Right Association (APRA) in the Top 30 Best Australian Songs of All Time; the band also won 11 ARIA Awards.

Sounding like a classic pub rock band, Cold Chisel formed in Adelaide in 1973, but gained immense success between 1978-1983, especially with their hit Khe San. During these years, the band ruled as Australia’s most popular band on record and stage. Cold Chisel had a knack for mesmerizing storytelling skills which main songwriter Don Walker became famous for. Selling over six million records in Australia alone easily shows why this band is one of the most iconic. Although breaking up in 1983, they got back together in 1988 topping the album chart in Australia with The Last Wave of Summer. Cold Chisel have continued over the years on and off again.

The Divinyls started in 1980 in Sydney, and mainly entailed vocalist Chrissy Amplett and guitarist Mark McEntee, as the band went through numerous changes before its conclusion in 1996. With her passion and determination for singing and performing, Chrissy Amplett was one of the main attractions of the Divinyls. The band has released five albums, four of which received places in the top 10 of the Australian charts, while one reached 15 in the United States. Their biggest single I Touch Myself was placed number 1 in Australia and number 4 in the US. The band in 2006, was inducted into the Australian Recording Industry Association (ARIA) Hall of Fame.

One of the longest lasting rock bands from Australia, The Angels took some liberal inspiration from AC/DC, yet had their own eccentric and lyrical style. Ironically, the band was founded by AC/DC’s own Angus Young and Bon Scott, who helped them debut their single Am I Ever Gonna See Your Face Again. The band first enjoyed heaps of success with their singles Take A Long Line and No Secrets. Their popularity did not stay local for long when they gained international success later on. However, due to legal issues they were variously credited under the names of Angel City or The Angels from Angel City. Each album seemed to gain more and more success leading them to tour throughout the US and Canada. They recently celebrated their 40th anniversary by releasing the album Talk the Talk in 2014.

Jet is one of the more recognisable Australian rock bands, having sold a whopping 6.5 million album copies worldwide and in Australia. Two of their more popular singles Are You Gonna Be My Girl and Rollover DJ were voted number 1 and number 19 on the 2003 Triple J Hottest 100. Jet have received an array of nominations and awards in Australia and America, including seven categories at the 2004 ARIA Music Awards such as Best Rock Album, Best Group and Single Of The Year.

Savage Garden started off when Daniel Jones put an ad in the paper looking for a lead vocalist for his then band Red Edge. The musician who responded, Darren Hayes, formed a duo with Jones and Savage Garden was born. Their first single in 1996 just reached number two. However, their next hits To the Moon and Back and Truly Madly Deeply reached number one. Their self-titled album held a record for the third longest stay for an Australian-made album in the top 10. They sold 11 million albums, while also winning ten ARIA Awards.

In the 1970s, Skyhooks became the band that everyone needed; their uniqueness and unconventional approach to stagecraft showed an edge that pushed rock to new standards in Australia. Although their music was one of rock, which spoke about the world around them, they advertised their band in ways that shocked everyone, with glittery costumes and big heels, which hardly reflected their lyrics. Due to their immense popularity, their first album stayed at number one for 16 weeks. Skyhooks subsequently created albums which would leave them with seven platinum records and two million dollars’ worth of albums.