Top 10 Tips for Planning the Ultimate Trip to Byron Bay 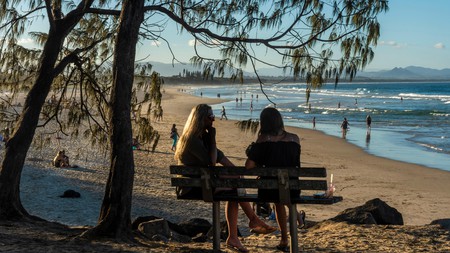 It might be a small town, but there’s so much to see, do and eat in Byron Bay that nailing the perfect getaway to this idyllic corner of northern NSW requires an element of planning. From the best places to shop to getting the most out of Byron’s iconic activities, here are 10 tips to help you make the most of your visit.

Head to the Arts & Industry Estate to shop

With retail spaces in town commanding top dollar these days, many local fashion and lifestyle brands have opened stores in the town’s Arts & Industry Estate, 3.5 kilometres (2.2 miles) north. If you don’t have your own wheels, or you’re keen to have a few beers at the Stone & Wood brewery, jump on the Byron Bay Solar Train, which drops you at North Beach Station, right near the Habitat Retail & Lifestyle Precinct.

Some of Byron’s best restaurants are out of town

Byron Bay’s Arts & Industry Estate is also increasingly becoming a foodie hub, with restaurants such as Argentinian-style eatery Barrio and hip café Folk among the most popular haunts. Ten minutes’ drive south of town, Suffolk Park boasts one of the best bakeries in the country alongside Mexican street food joint Chupacabra. Meanwhile, up in the hinterland, mod-Oz restaurant Harvest Newrybar and Japanese fusion lunch spot Doma are well worth a longer drive. 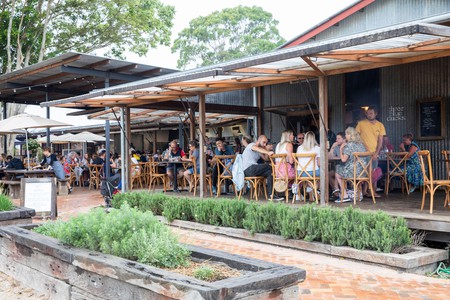 If you’re only making a brief visit to Byron and your accommodation is central, you can get away without needing a car. But with plenty to do within an hour’s drive of Byron (from the hinterland towns to the west to the great restaurants dotted along the Tweed Coast to the north), it’s worth renting one at the airport if you’re arriving by plane. If there are more than two in your party, it may also work out cheaper than paying for single seats on airport shuttles.

Leave your city clothes at home

Nothing screams “tourist” like high heels, heavy make-up, designer threads and even business shirts in Byron, where it’s perfectly acceptable to dine at top restaurants wearing a T-shirt and sandals. You do you, but those who’d prefer to blend in with locals would be wise to keep their look more casual. 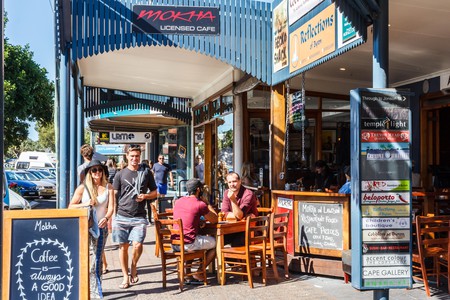 Gone are the days when Byron basically shut down on Sundays, but most local restaurants take last orders at around 9pm, so it’s wise to head out early for dinner. Reserving ahead during the summer months is essential at restaurants that take bookings; if you miss out, stopping by at opening time to add your name to the waitlist will give you the best shot at scoring a table.

Know that Nimbin isn’t above the law

While there is little to see or do in the hinterland town of Nimbin, just over an hour drive west of Byron, Australia’s epicentre of weed culture remains a popular day trip. With recent years seeing a heightened police presence around town, visitors should think carefully before making any insalubrious souvenir purchases there. 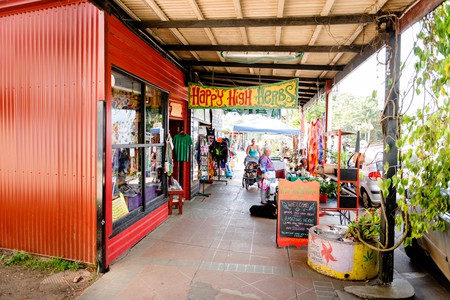 Living out your #vanlife fantasy comes with a price

As romantic as it sounds to wake up to the sound of waves lapping at the beach outside your camper, it’s illegal to camp overnight (in your car or otherwise) in Byron’s streets and reserves, with fines ranging from AU$110 (£57) to AU$2200 (£1,134). All local campgrounds as well as some hostels (including the Arts Factory) offer campervan spots.

Be prepared to practice patience in the surf

Byron’s surf beaches are legendary, but when conditions are optimal, you might be sharing the line-up at The Pass with more than 100 other surfers. Practicing good surfing etiquette will invariably see you score more waves, and maybe make a few new mates while you’re at it. 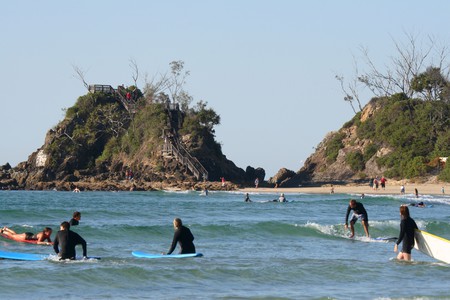 It might seem obvious, but even though there are more than 1,000 hostel beds alone in Byron, the town fills to the brim during the summer months, school holidays and festival periods, so if you’re looking to visit during those times, you’d be wise to get in early while there are still plenty of accommodation options to choose from.

Walking the 3.7km (2.3mi) loop around the Cape Byron headland is a quintessential local experience, but most people don’t realise that the official track weaves down from the lighthouse through the rainforest – not on the road. If you’ve brought your smartphone, look out for the Byron Bay History Trail markers along the route, which reveal snippets of the town’s colourful past. You can also hire an Arakwal Aboriginal Discovery Guide to take you on a more spiritual tour of Walgun, the Bundjalung name for the cape. 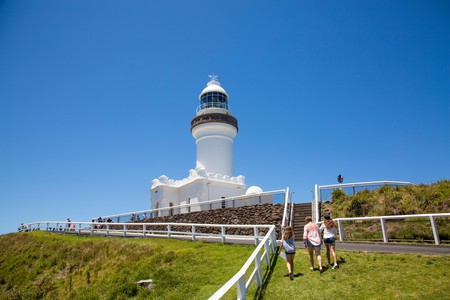