This Rural Area is About to Become Australia's Largest Outdoor Gallery 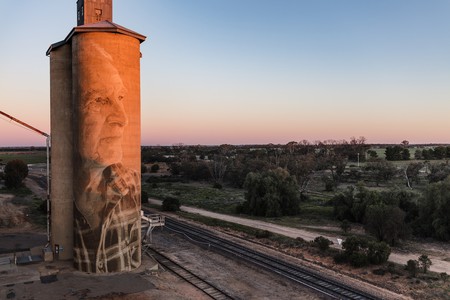 For over a century, the towering wheat silos of Victoria’s Wimmera/Mallee region have watched over the rural landscape. Now decommissioned, they have a new purpose in a project set to become Australia’s largest outdoor gallery.

In 2015, Brisbane street artist Guido Van Helten created the 30 meters high ‘Farmer Quartet’ mural in the small town of Brim as a tribute to the drought-stricken farming community. The masterpiece went on to inspire the Silo Art Trail project. Two years later, the Silo Art Trail now features five murals with a sixth to be completed this year, and when finished will stretch over 200 kilometers, linking some of the state’s smallest towns. 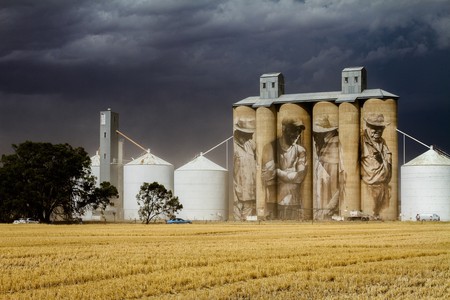 This week while visiting Sheep Hills, Victorian Premier Daniel Andrews announced that $500,000 would go towards Wimmera Mallee Tourism to extend the project. “We’ve got a number of them here now, but what it lacks is a proper co-ordinated strategy, so we are going to give $500,000 to Wimmera Mallee Tourism to develop an overarching plan and that will mean we are in a strong position to further support extra silos being done,” he told reporters. “It’s a small investment but it will make a powerful difference.”

The new funding could see a further 12 silos added to the trail which currently runs through the towns of Rupanyup, Sheep Hills, Brim, Rosebery, Lascelles and Patchewollock.

Yarriambiack Shire Council chief executive Ray Campling welcomed the state government’s announcement. “It’s got international traction, and I’ve been amazed speaking to people with the interest it has generated,” he said.

The trail starts at Rupanyup with a monochrome mural inspired by the local Rupanyup Panthers Football & Netball Club by Russian artist Julia Volchkova. In Sheep Hills, internationally renowned artist Adnate captured the portraits of four Indigenous locals across six silos. Acclaimed Melbourne street artist Rone depicted the faces of fourth-generation farmers Geoff and Merrilyn Horman onto two silos in Lascelles. At the end of the trail, in the town of Patchewollock, street artist Fintan Magee captured the ‘classic farmer looks’ of local sheep and grain farmer, Nick ‘Noodle’ Hulland. The last silo in trail in Rosebery will be completed this year. 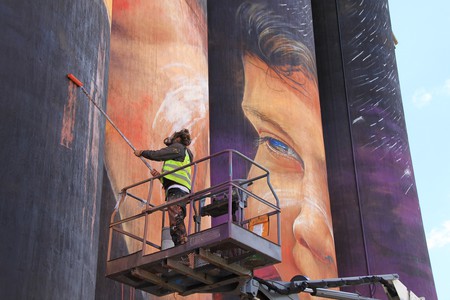 Peter Johnston, the Victorian regional manager of GrainCorp, the company who owns five of the six silos, said “I’m amazed at how many locals are engaging in the project,” he said. “And the pub at Brim has never been so busy!’’