Australian Sculpture Parks You Should Visit

The last 40 years have seen sculpture parks play a vital role in the presentation and understanding of modern and contemporary art in Australia. Nationally and internationally significant works can be enjoyed in beautiful settings, which range from vast open parkland, to compact rainforest gardens. As diverse as the states and territories they belong to, these are six of the best places to discover sculpture in Australia. 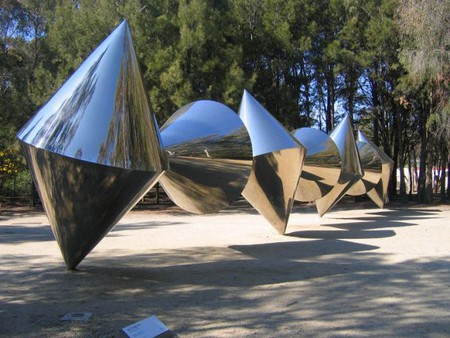 Lying between the National Gallery of Australia and Lake Burley Griffin is an impressive Sculpture Garden displaying more than 25 outdoor works of art. The garden itself was planted 22 years ago, containing native plants chosen to tolerate Canberra’s cool winters and hot, dry summers. The eclectic range of sculpture in the garden is by regional, national and international artists, with many works acquired during the early 1980s when an industrial, abstract style prevailed. There is an interesting history behind several sculptures, like the bronze casts of Auguste Rodin’s The Burghers of Calais (c.1885-86), which were cast during the 20th century from plaster in the Musée Rodin in Paris. These were originally designed by Rodin as a monument to the six Frenchmen, who offered their lives to save Calais during the Hundred Years’ War. Most recently, James Turrell’s ambitious site-specific installation, Within Without (2010) has been allowing visitors to marvel at the changing light from the sky in the Gallery’s new Australian Garden. Other collection highlights include the water-dwelling Heads from the North (2004) by Indonesian Dadang Christanto, and a maquette for Antony Gormley’s Angel of the North (1996). Most unique is Fujiko Nakaya’s Fog Sculpture (1976), which produces an atmospheric mist over the Marsh Pond during its hours of operation. 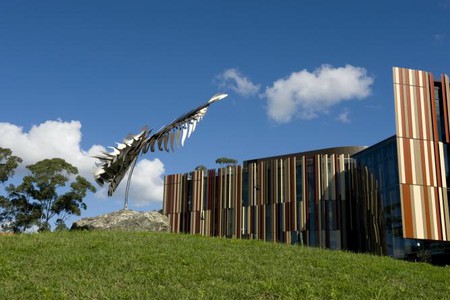 Founded in 1992, the Sculpture Park at Macquarie University in New South Wales was the first in Australia to become a permanent attraction on a university campus. It is also the largest of its kind in the country, featuring over 130 sculptures dotted across 125 hectares of open parkland. The focus of the collection is on contemporary sculpture, often by Australian artists. Some of the 21st-century works are designed to be interactive, allowing visitors to touch or move them. A few of the sculptures make a sound, such as when the wind travels through the stainless steel layers of Algolid (1989) by Errol Davis. Around 15 sculptures by the park’s founder, Errol Bruce Davis (1926-2009), can be seen in the grounds. Other artists with several sculptures in the collection include Robert Klippel (1920-2001) and Jan Shaw. Their works demonstrate the wide range of media on display, from Klippel’s trademark mechanical-looking metal and wood constructions, to Shaw’s smooth, sandstone shapes conveying human relation and emotion. Visitors to the park will also enjoy its charming flora, fauna, earth sciences garden, heritage sites, and Art Gallery. 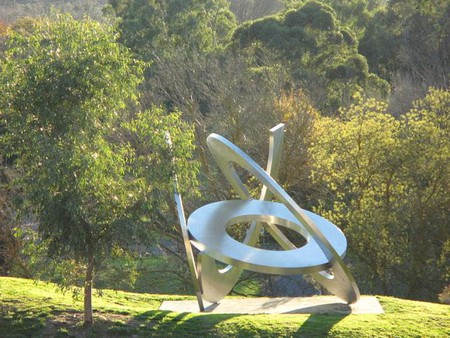 Originally the home of John and Sunday Reed, the 15-acre property near Melbourne, containing the Heide Museum of Modern Art opened to the public in 1981. Soon after, the Reeds started a sculpture park with two works: Ron Upton’s Three Forms (1964) and David Tolley’s Man/Woman (c. 1966). Gradually the sculpture park became an extension of the museum’s nationally important collection of modern and contemporary art. The park’s main focus has been on sculptures by Australians, but with the inclusion of works by selected international artists, such as Rick Amor, Anthony Caro, Dennis Oppenheim and Anish Kapoor. With the redevelopment of the museum in 2006 the park was named the Connie Kimberly Sculpture Park. That year also saw the installation of Rings of Saturn (2006) by Inge King, one of Australia’s most renowned sculptors. King was a founding member of Centre Five, a group that formed in 1961 to promote public appreciation of modern abstract sculpture. An integral part of the charm of Heide Museum of Modern Art is the unique landscape setting, featuring exotic and native plants, as well as artists’ gardens. Recent commissions include Karakarook’s Garden (2005-06) by Lauren Berkowitz, containing rare indigenous plants, and Fiona Hall’s native rockery garden, an experimental espalier of three Silver Princess trees (Eucalyptus caesia). Visitors can also sample refreshments and fresh, seasonal produce from the kitchen garden whilst relaxing in the Tony and Cathie Hancy Sculpture Plaza. 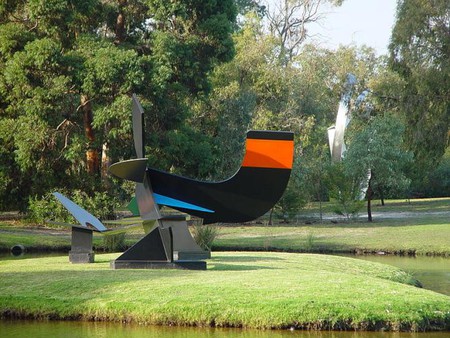 Established in the 1970s, McClelland Sculpture Park in Victoria is one of Australia’s most popular, with a collection of over 100 outdoor works covering 16 hectares. The McClelland Gallery also holds around 200 indoor sculptures dating from the 19th century to the present day. The not-for-profit organization is committed to promoting sculpture in Australia, which includes hosting the biennial McClelland Sculpture Survey and Award. Furthermore, the park displays the works of acclaimed Australian sculptors, such as Clement Meadmore, Lenton Parr and Norma Redpath. McClelland Sculpture Park is also dedicated to improving its bush landscape of tea-tree forests, bracken paths, heath land, gardens and lakes. In doing so it has created The Elizabeth Murdoch Walk, a pathway that aids navigation through the park to its sculpture locations. The grounds were traditionally called Studio Park, named after the studio of Harry McClelland, the artist and philanthropist who painted here. He was at the center of an influential local bohemian group in the 1920s, along with his poet and entrepreneur sister, Annie May. In memory of her brother, Annie May bequeathed the land and buildings, which led to the development of the park and gallery enjoyed by many today. 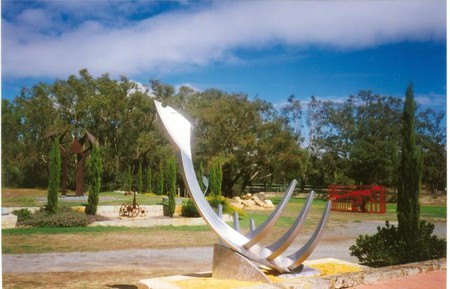 The only privately owned venture of its kind in Western Australia, Gomboc Gallery Sculpture Park has been showcasing sculpture since 1982. The park’s 4.5 hectares lie just 30 minutes away from downtown Perth, in the wine-making region of the Swan Valley. Diverse works from around the world are displayed in the Gomboc Gallery grounds. An indoor gallery with five large exhibition spaces, and a bronze art foundry, can also be found on-site. Guest sculptors include Sasha Reid, whose unique wooden walrus catches the eye, as does Sui Jianguo’s large red dinosaur in a cage, titled Made In China. Many more works are presented in the park, some of them by artists-in-residence or gallery co-director Ron Gomboc. An experienced sculptor, Gomboc has completed commissions such as designing the equivalent of the Oscar’s figurine for the Australian Academy of Cinema and Television Arts Awards. Most notably, the Gomboc Gallery Sculpture Park has been hosting an annual sculpture survey for more than 30 years. The show lasts for a month, presenting national and international talent, such as that of Japanese sculptor Haruyuki Uchida. Works by students from the local universities are also included in this prestigious event.

Situated on the peak of Mount Glorious, Phoenix Sculpture Garden is located 35 kilometers northwest of Brisbane, Queensland. This beautiful rain forest setting provides the perfect backdrop for the works of site-owner Graham Radcliffe. The garden is the realization of Radcliffe’s dream to place his elegant sculptures in natural surroundings, simultaneously creating a haven of peace. Over 100 marble and bronze sculptures are permanently displayed outdoors and indoors, in addition to Radcliffe’s paintings, shown in the gallery. Born in Brisbane in 1934, Radcliffe has been a full-time sculptor for nearly 30 years. Working between his home on Mount Glorious and Pietrasanta in Italy, he uses unusual varieties of marble and onyx to create majestic works. The garden takes its name from his largest sculpture, Phoenix Germania, which was made to celebrate the reunification of Germany. The public can visit the garden on Sundays and for occasional concerts, courses and talks. Furthermore, visitors will appreciate the views of Moreton Bay and Stradbroke Island from the garden’s location 632 meters above sea level. 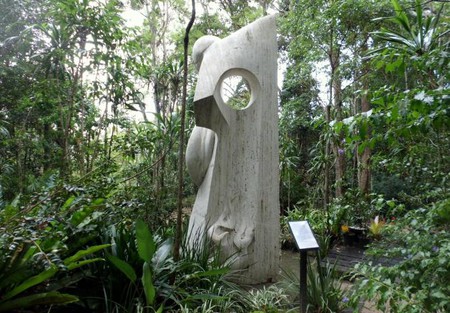 Image Courtesy of Phoenix Sculpture Garden
Give us feedback