The Significance Of ANZAC Day, Lest We Forget

Lest We Forget | © diego_torres / Pixabay

Officially named ANZAC Day in 1916, one year after the arrival in Gallipoli, the 25th April is the day to remember the sacrifice made by those who died during military operations. This is not a day that marks military triumph, rather a day that is central to Australia’s national pride and identity. It is the first campaign Australia and New Zealand joined forces for, fighting as independent nations, and a day that remembers the courageous soldiers who left us a powerful legacy.

The Outbreak of War and The Creation of ANZAC

In 1914, when the war broke out, Australia was still a young nation, only federated 13 years prior to this. The leading government was wanting to establish a high reputation across the world, rather than maintaining the then reputation of British convicts. As a result of their colonisation, Australia was automatically deemed part of the Commonwealth when Britain declared war in August 1914.

Although no one knows who exactly came up with the term ANZAC (Australia and New Zealand Army Corps), it has been recognised since the Great War of 1914-18. It is known that the volunteers that partook in the Australian Imperial Force (AIF) and the New Zealand Expeditionary Forces (NZEF) were both stationed in Egypt in December 1914, under the command of Lieutenant General William Birdwood. Initially suggested to be called the Australasian Corps, both forces were reluctant to lose the individual pride they held in their identities. Eventually ANZAC was suggested, and they took great pride in this name — which is still used in both countries today. 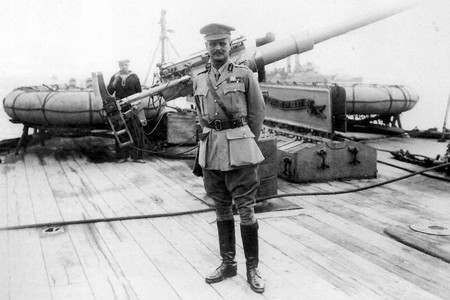 On the morning of 25 April 1915, eight months into WWI, the ANZACs — who had formed part of an allied expedition to capture Constantinople (now known as Istanbul) from allied navies and knock Turkey out of the war — arrived on the shores of the Dardanelles Peninsula, Gallipoli, and were met by a large, well-armed Turkish force. As a result of poor leadership and direction from London the ANZACs landed in a small cove — that was quickly donned Anzac Cove — which posed an issue as they now faced steep cliffs to climb while being shot at by the Turks. Over the next two days, around 20,000 soldiers landed on this beach. On 20 December 1915 the surviving troops were evacuated, with over 10,000 ANZAC soldiers killed and more than 23,000 further injured.

It was here, at the Gallipoli Campaign, that started the beginning of ‘true Australian nationhood’. Prior to this, white Australians had believed they had no history, claiming it was not a true nation yet. As a new nation, this day — the day they were finally a part of something of a greater scale — was a defining moment that showed just how strong this nation would one day become.

Although the ANZACs were not triumphant in victory, the courage and endurance these soldiers displayed was held high — naming these soldiers as ‘ANZAC Legends’ — alongside the death and despair caused by unsuccessful strategic plans from the British.

After the Second World War, ANZAC Day served to further commemorate those lost in WWII. The following years resulted in commemorating every life, of both men and women, lost in all military and peacekeeping operations which both nations were ever involved in.

Due to the significance this day holds, in 1949 legislation announced the protection of ANZAC Day from ever facing being ‘Mondayised’. Meaning, no matter what day of the week the 25th falls on, ANZAC Day will always be held on the 25th April. 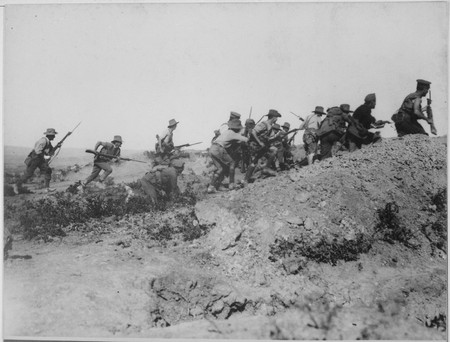 Scene just before the evacuation at Anzac. Australian troops charging near a Turkish trench. When they got there the Turks had flown. Dardanelles Campaign, circa 1915 | © National Archives and Records Administration / WikiCommons

As the dramatic news of the arrival of the troops finally reached home shores, on 30 April 1915 the New Zealand government declared a half-day holiday for the government offices, along with the flying of flags and patriotic meetings. National pride was seen greatly across New Zealand, and further in Australia. However, for Australia it wasn’t until 1916 that the first ANZAC Day commemorations were held, with a wide variety of ceremonies and services across the nation coinciding with a march in London and a ‘sports day’ in the Australian camp in Egypt.

In London, 1916, over 2,000 ANZAC troops marched the streets, and the wounded travelled in cars with their nurses, while similar marches took place across Australia. A London newspaper headline noted the ANZACs as ‘the knights of Gallipoli’, and boy were we proud of them.

It wasn’t until the 1920s that ANZAC Day was established as a national day of commemoration, honouring and remembering over 60,000 ANZACs who died during the war. In 1927, Australia saw every state carry out this day as a public holiday. Further, in the mid-1930s, all rituals associated with this day were firmly established, including the dawn vigils, marches, memorial services and reunions. 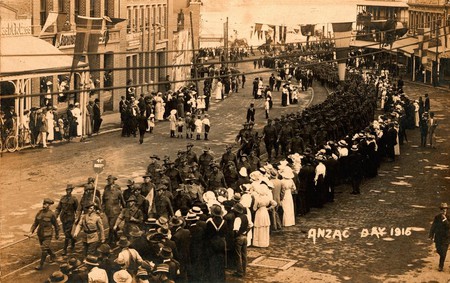 Men, women and children line the streets to watch the procession of the 41st Battalion through Brisbane on Anzac Day, 1916. | © Toter Alter Mann / WikiCommons

It wasn’t until 1942 that the first ANZAC Day was commemorated in Gallipoli at ANZAC Cove. During this time, Japan was dropping air attacks, resulting in the government prohibiting large public gatherings. There was no march, nor a memorial service, but the first (small) commemoration was held. Since then, ANZAC Day has been honoured at the Memorial every year; deeming this as a rite of passage for all Australians and New Zealanders. 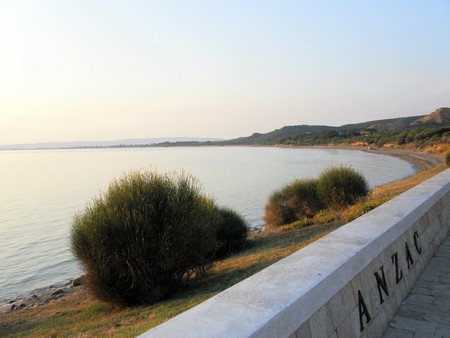 The half-light of dawn, when the service commences, was once known as the most favoured times for soldiers to attack. It is in those first moments that soldiers felt and remembered those quiet and peaceful moments.

At dawn — the time of the original landing in Gallipoli — Australians gather together to respect and honour those who served our nation, including all services of the Defence Forces. This emotional, formal ceremony held at war memorials includes an introduction to the ceremony, hymn, prayer, an address, laying of wreaths, a recitation, the Last Post, a Minute’s Silence, The Ode, the Rouse or the Reveille, and the National Anthem.

At the ceremony, a catafalque party consisting of four members of an armed guard all stand heads bowed, arms (weapons) reversed, as they face outwards approximately one meter from the war memorial. This party was traditionally seen surrounding a raised coffin (catafalque) but has become an ANZAC tradition.

Further, many families will take this opportunity to place a red poppy beside the name/s of relatives who are listed on the Memorial’s Roll of Honour, as further seen on Remembrance Day. This is followed by ex-servicemen and women, and now generations of families, marching through major cities and smaller centres in the annual march. 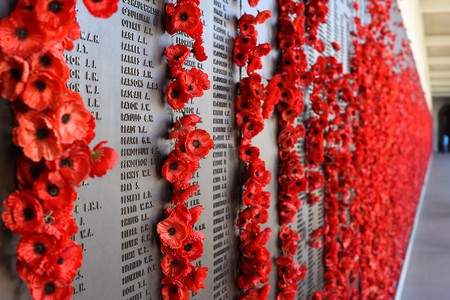 The origins of this service are not entirely clear as many dawn services were noted across the nation, completely independent of each other. However, the first dawn service for ANZAC Day was noted in 1923, followed by the first official Dawn Service held at Sydney Cenotaph in 1927. This was also noted as the first year all Australian states recognised this as a public holiday. Although this ceremony is not army specific, rather a public ceremony, it continues to follow a military routine as originally only veterans would attend. 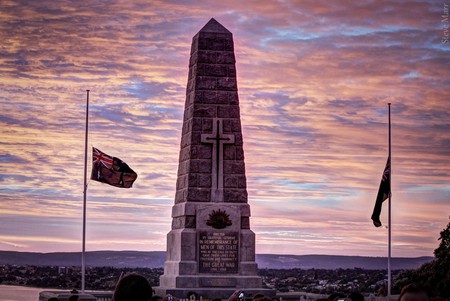 The Last Post is a military tradition that signifies the end of the day’s activities, and is further sounded at military funerals as the soldier’s final rest — played by a bugler, followed by a Minute’s Silence. This silence is then broken by the Reveille (originating from French word ‘reveillez’ meaning to ‘wake-up’) originally played prior to daybreak as a drum beat. The Reveille is now known, in regards to ceremonial traditions, as the moment the flags are raised to the masthead, after being lowered to half-mast during the Last Post.

This originates back to 1919, after a Melbourne Journalist and WWI veteran Edward George Honey appealed for a five minute silence to the London Evening News to honour those who died during the war. After a second appeal for a period of silence on Armistice Day in October 1919 by South African Sir Percy Fitzpatrick, who already encouraged silence at noon in Cape Town when they lost troops, King George V readily agreed. A trial took place at Buckingham Palace, with both Honey and Fitzpatrick attending, and resulted in the chosen two minutes of silence. The King further sent a message to the people of the Commonwealth on 6 November 1919, stating:

During those two minutes, all normal activities should be suspended. Throughout the years, this was incorporated into the ANZAC Day Service. 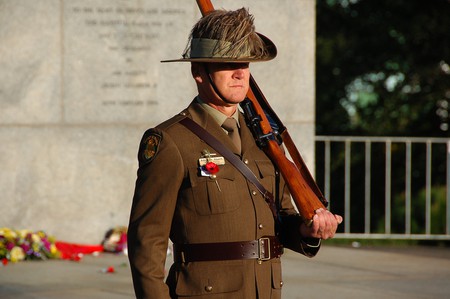 Reading of The Ode

The traditional recitation of The Ode is read on ANZAC Day. Written by the English poet and writer Laurence Binyon, published in 1914, this commonly recited verse has since been known as the League Ode, associated with commemoration services in Australia since 1921. 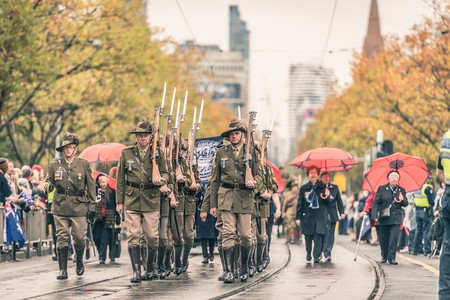 Known to have been found growing along the Gallipoli Peninsula, a sprig of rosemary is traditionally worn on ANZAC Day due to it’s connection to those who were lost; and is regarded as a sign of remembering those who have gone.

The Red Poppy has great meaning as it is known across the world as the symbol of war remembrance, as it was first seen in Flanders Fields as the first flower to bloom over the graves of soldiers. Australia quickly adopted this tradition, shipping poppies in for both Armistice Day (Remembrance Day) and ANZAC Day. Although now made of light cloth or paper, the poppies seen today are based on the design adopted in 1978. 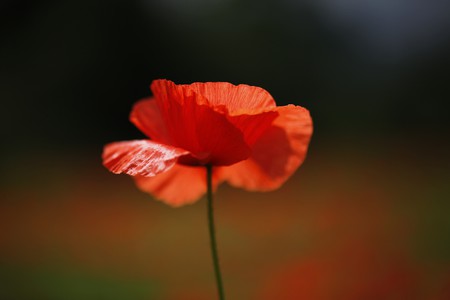 In 2015, 25th April marked 100 years since the arrival of the ANZAC troops in Gallipoli in 1915. This day holds a very special place in all Australian hearts; it was this day 100 years ago that we proved ourselves as a young nation equal in courage and honour to that of any older nations. Large celebrations were held in Australia, and further in New Zealand and across the world. It seemed only fitting that a centenary service would take place in London, as the first march honouring the ANZACs occurred in 1916. The Queen, the Duke of Edinburgh and Prince William, joined by senior government and military figures, laid wreaths in honour of our troops at the Cenotaph.

Further, Gallipoli saw the greatest commemoration uniting thousands from Australia and New Zealand, alongside Princes Charles and Harry, who paid their respects at the exact place the ANZACs landed a century prior.

We Will Continue To Remember

This national day of remembrance is one of the highest moments in our history; remembering those who fought for our freedom, our rights, and our country. Although they may not have won it is important to reflect on the many different meanings each and every person holds about war. Whether you wear the medals your grandparents and great-grandparents won during war, a poppy or a sprig of rosemary, it is in these moments that we are united as one, as we remember those who have fallen.