The Most Spectacular Aboriginal Engraving Sites Around Sydney 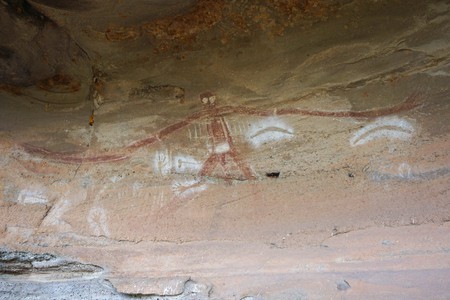 The Baiame figure of the cave | © Elizabeth Whitehead

The vein of ancient civilisation runs deep through the heart of the Australian wilderness. Much of Australia’s past will forever be shrouded in mystery, but the story of the first humans on this vast continent lives on through fragments of ancient art.

Around Sydney, hundreds of petroglyph rock carvings punctuate the bushy surrounds of the modern city. Dreamtime deities, frolicking bush animals, and celestial objects frozen in the stone are enigmatic reminders of the land and culture that thrived where the city stands today. With ages and meanings difficult to decipher, these are the best engravings situated at the doorstep of Sydney’s sprawling metropolis.

The mystifying markings of the Red Hands Cave 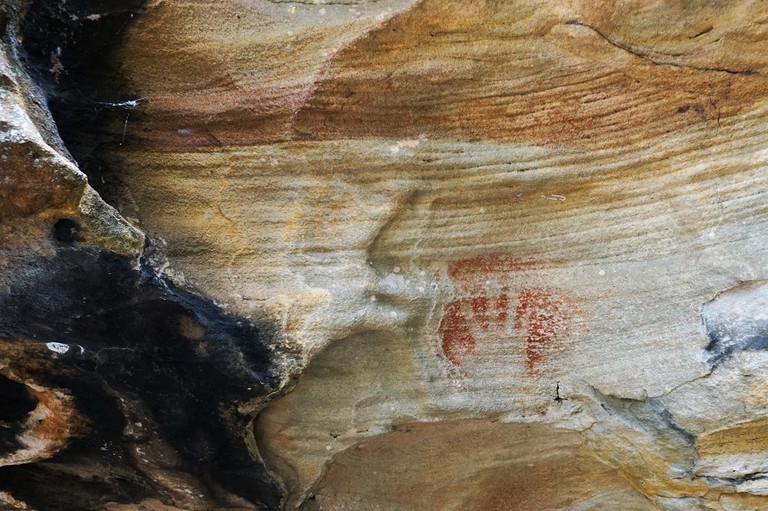 Keep a sharp eye out for this one, as the Red Hands Cave in the far north of the Ku-ring-gai Chase National Park is easy to miss. This small cave is decorated with the hand prints of the Garrigal people, the local clan which occupied the area. There’s something so very human, yet mesmerising, about these faded imprints of our ancestors stenciled on the cave walls. Thought to have been originally made between 500 and 2,000 years ago, the faint impressions are now barely visible to the naked eye. Sadly, little is known about these fascinating human markings; now just whispers on the wall from a past near-forgotten. Ochre hand stencils are a common motif throughout the ancient world, dating back as far as the Palaeolithic. What is the meaning behind these mystifying markings that adorn cave walls throughout history – a ritualistic symbol, or the artists confirmation of his or her own self-awareness?

The spiritual significance of Baiame Cave 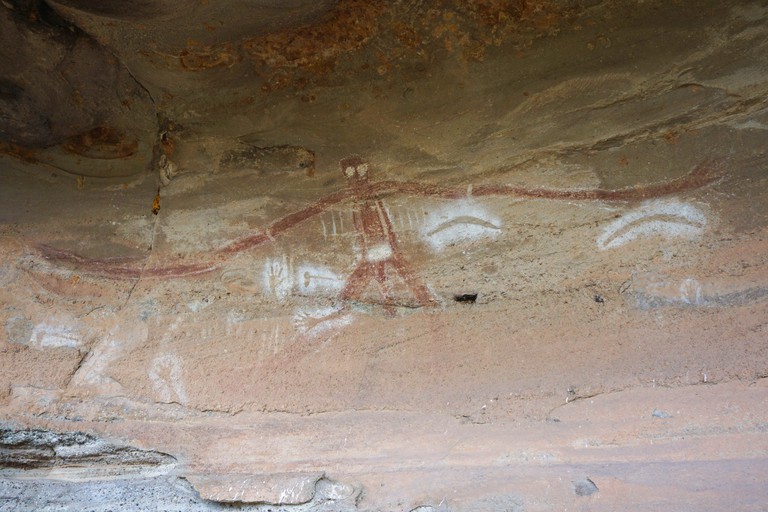 The Baiame figure of the cave | © Elizabeth Whitehead

Tucked away in the heart of the wine country north of Sydney, a small cave contains a fascinating and rare depiction of the ancient creator spirit, Baiame. The ancestral hero is depicted with his enormous arms wrapped around the cave walls, overlooking the valley sprawling below for more than 2,000 years. To many different groups in the area, Baiame is ‘The Sky Father’, the creator of all the land, tradition and song. He also created the first male initiation site, or bora. His presence hints that the site was just that, a spiritual place in which a boy abridged his transition to a man. The inhuman proportions of Baiame’s limbs and his large, blank eyes draw the viewer into another world – perhaps that of the dreaming.

The secluded bora on the Elvina Trail 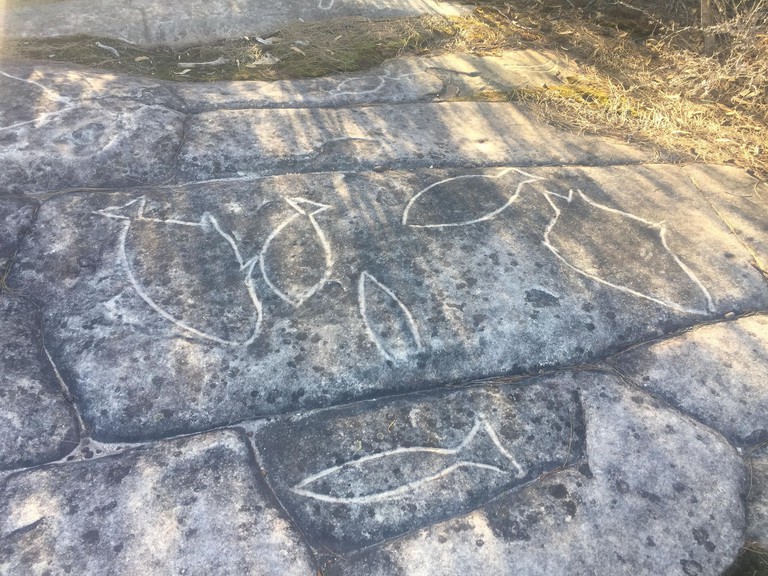 This site is undoubtedly one of Sydney’s best-kept secrets. Completely unmarked and reachable only through a discreet side trail, this huge engraving site is a true reward for the adventurous. Some fascinating drawings lie near the site entrance, including a gigantic whale and a collection of figures thought to represent spirits and deities. The location is thought to be a male initiation site of the Garrigal people, due to the presence of a large engraving of Daramulum, the one-legged deity son of the creator god, Baiame and his emu wife, Birrahgnooloo. Daramulum is said to live either on the moon or in the trees, only coming out during initiation ceremonies. By fashioning a bullroarer (ancient musical instrument) from the bark of tree in which Daramulum’s spirit is encased, the sound of the instrument when played conjures the spirit’s voice.

Aboriginal astronomy along the Elvina Track 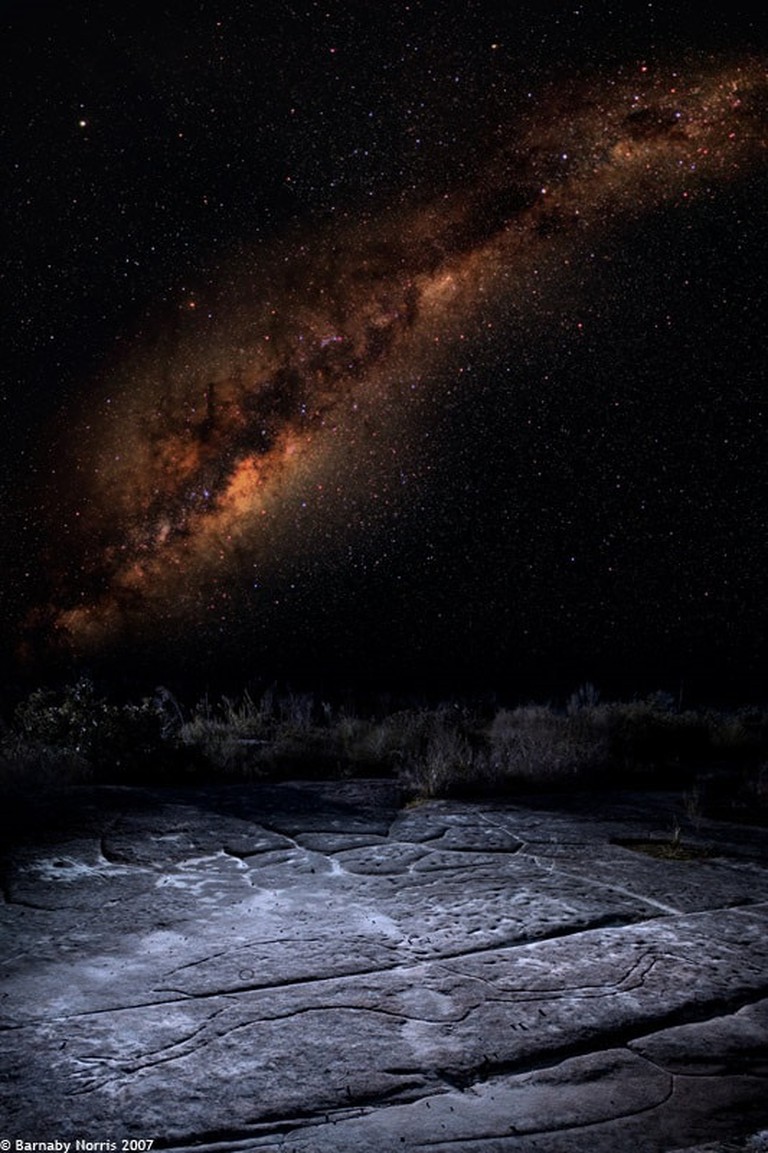 Next to the drawing of Daramulum, a large emu is depicted. More than just a likeness of the distinctive bush-bird, this engraving reflects the ’emu in the sky’ constellation; an ancient and revered constellation now known to modern astronomers as the Coalsack nebulae. During egg laying season, the petroglyph aligns exactly with the constellation above it. Coincidence? Look closely at the drawing, and you can make out the outline of a small circular object, possibly an egg, tucked just behind the emu’s legs. Around the emu, one can find many fascinating depictions of shields, fish and animals. As a site of spiritual significance, the whereabouts is not advertised or published by the national park. Visitors are asked to exercise respect when entering the site by keeping a distance from the engravings and leaving no trace behind. 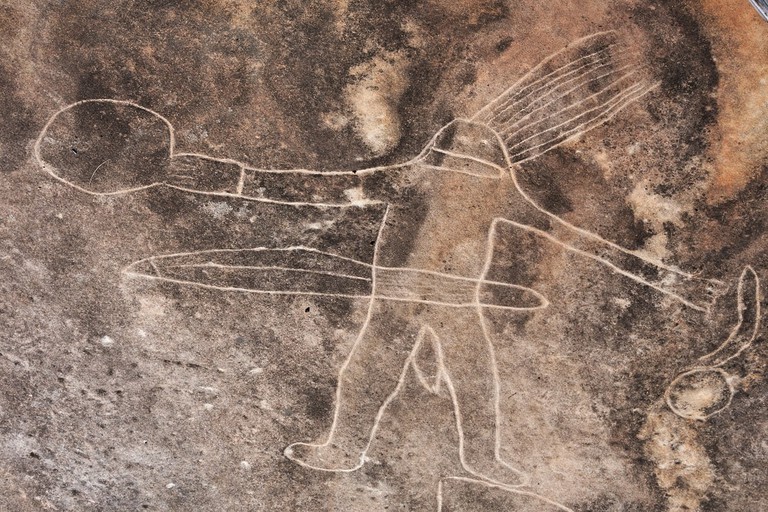 On a rock platform among the scrubby bush-land of the Brisbane waters national park lies the mysterious ‘Bulgandry man’. Believed to be an ancestral hero, he stands proudly at the foot of a long canoe, adorned in an elaborate headdress, with a boomerang in hand and a woomera (spear) across his waist. He is surrounded by kangaroos, fish and other animals representing hunting scenes. A rare depiction of the human face in Aboriginal rock art around Sydney, the Bulgandry man is a fascinating and unique insight into Dreamtime spirituality. Around the figure we find many depictions of hunting scenes, as well as axe grinding grooves for sharpening weapons. It is likely that this was a communal meeting spot for the Guring-gai people. We may not know who exactly the Bulgandry man is or what he represents, but he is certainly a very rare and spectacular sight.

The majestic marital scene on the Basin Track 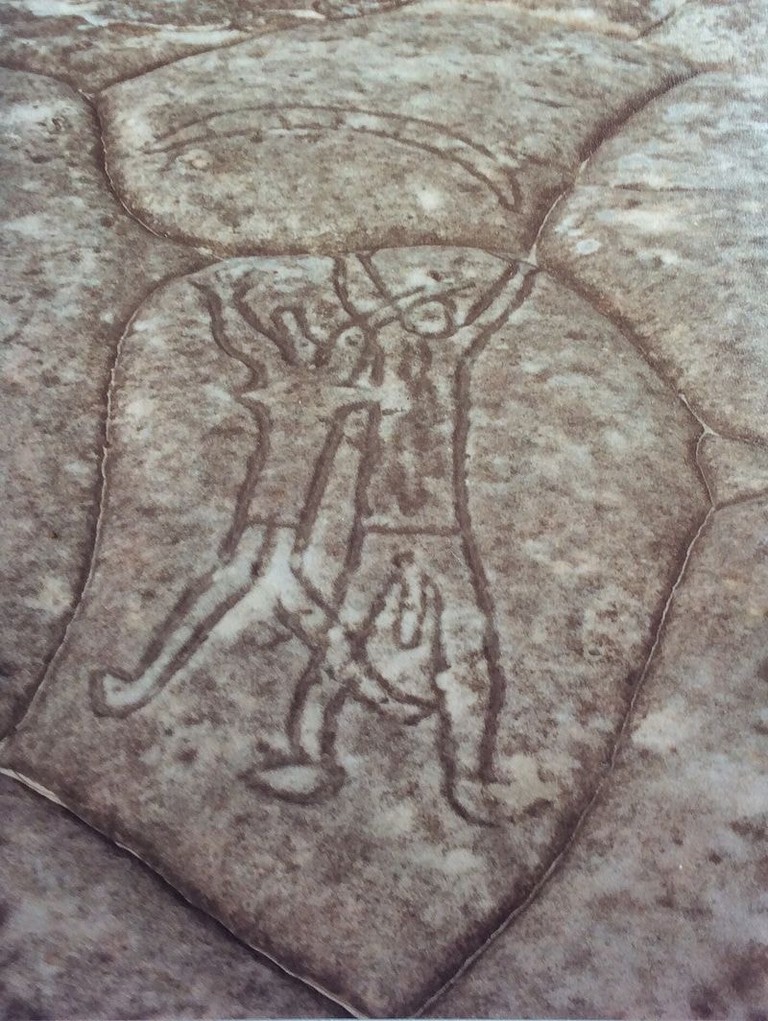 The collection of engravings on the Basin Track are some of the most well known in Sydney, and for good reason. The crown jewel of the group is the depiction of a man and woman, interlocked and reaching together towards a crescent moon. The meaning is not entirely known, although the piece is thought to be related to marriage or family. The couple are circled with a motif wallabies and fish, spiralling outwards as if in flight. The mystery surrounding the meaning behind the two figures, the celestial imagery and the fantastical scene surrounding it make this piece a powerful window, albeit a shrouded one, into Indigenous spirituality and beliefs.