The Most Beautiful Spots on Fraser Island, Australia 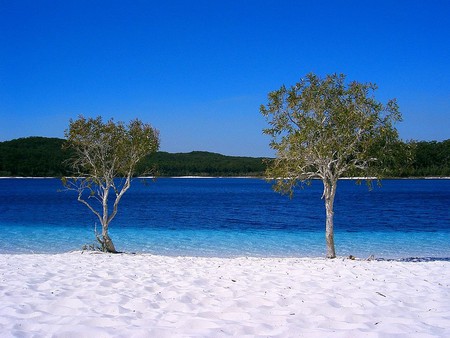 In the local Indigenous language, Fraser Island is called K’Gari, which translates as ‘paradise’. And it’s not hard to see why once you’re introduced to these 10 spectacular beaches, forests and swimming holes located around this mammoth sandbar.

Fraser Island is home to most of the planet’s perched lakes — deposits of water formed by rainwater in depressions between sand dunes — and the most famous of the lot is Lake McKenzie, an irresistible azure swimming hole surrounded by snow white sand. The kilometre-wide lake within the Great Sandy National Park is a favourite with swimmers as well as bushwalkers, with scenic camping facilities nearby. 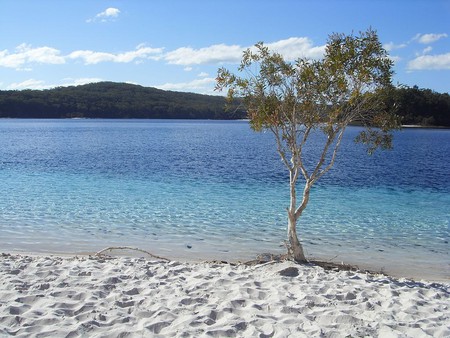 After Lake McKenzie, this freshwater swimming spot is the next most famous natural spring on Fraser Island — this one being emerald in colour. Bordered by the Hammerstone sand dune which is slowly gobbling up the water, Lake Wabby is one of the few lakes on Fraser Island where fish can survive — more than a dozen species have been identified splashing around.

The rusty remnants of this former naval ship lie on 75 Mile Beach, providing one of the most recognisable landmarks on Fraser Island. The ocean liner was stranded in 1935 en route from Melbourne to Japan and has been beached on the eastern side of Fraser Island ever since, where it has become one of the island’s biggest attractions. 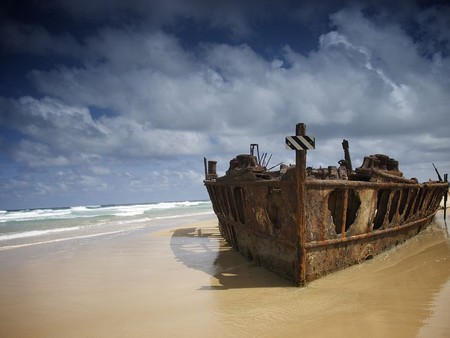 The world’s largest sand island features Queensland’s second oldest lighthouse, which is still active near the northern tip of Fraser Island. Constructed in 1870, the remote and heritage-listed Sandy Cape Lighthouse can be accessed by ferry, a rugged 4WD journey or an even more arduous hike.

Wanggoolba Creek isn’t just the landing point for ferry services from the mainland — it’s also one of Fraser Island’s most scenic sites, home to a crystal clear freshwater stream that’s brimming with marine life and ancient ferns. Central Station — which once housed 30 properties servicing Fraser Island’s old logging trade — is the historic heart of the island, shaded by towering gums and pines. 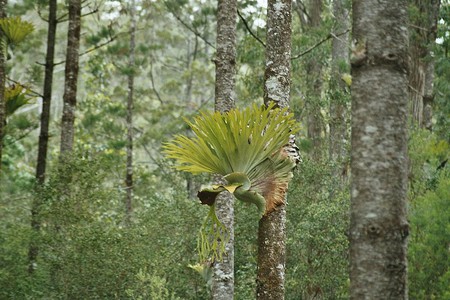 The largest creek on Fraser Island pulses with four million litres of freshwater flowing into the ocean every hour, and doubles as one of the island’s most popular swimming and picnic spots. Located along 75 Mile Beach near the SS Maheno shipwreck, Eli Creek fizzes with flowing water as well as a steady stream of visitors keen to have a dip.

Sharing a name with the spiky limestone formations in Western Australia, Fraser Island’s version of the Pinnacles are a string of colourful sand cliffs stretching along the island’s eastern coastline. Millennia of minerals leaching into the sand has coloured the landmark dozens of shades of red and yellow, and the Pinnacles are considered sacred by the Indigenous Butchulla people, who have inhabited this territory for 5000 years. 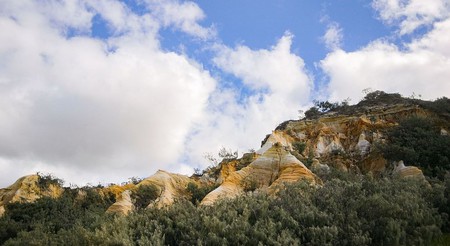 Wonder how this stretch of sand got its name? You guessed it, 75 Mile Beach is 75 miles long. This golden stretch of coastline is popular terrain for 4WD tours but don’t be tempted to go for a swim in the water — it’s considered the most dangerous beach in the world thanks to powerful rips as well as sharks, jellyfish and wild dingos.

The only place on Fraser Island where it is safe to have a dip in the saltwater? Cheers to Champagne Pools. Found between Waddy Point and Indian Head on 75 Mile Beach, these serene pools are formed by volcanic formations that protect swimmers from the ocean, with waves crashing into the nearby rocks that shield the popular swimming spot. 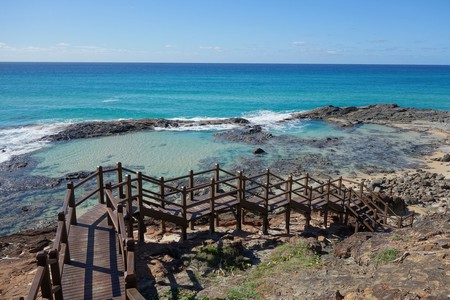 Valley of the Giants

The Valley of the Giants is where you will find the two largest trees on Fraser Island: the Giant Satinay and the Giant Tallowwood. The world’s largest sand island is blanketed in a thick layer of vegetation — the only place in the world where pristine tropical rainforest grows in sand 200 metres above sea level.