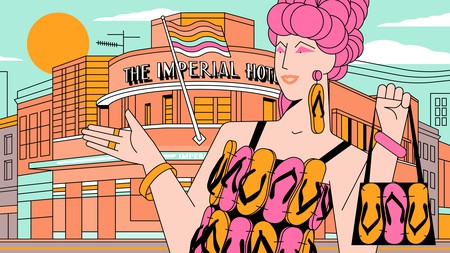 When Mitzi Del Bra (Hugo Weaving) strutted onto the stage in the opening scene of The Adventures of Priscilla, Queen of the Desert in 1994, the Imperial Hotel was thrust into the spotlight. But this welcoming watering hole in Sydney’s bohemian Inner West was an icon of Australia’s queer community long before Australia’s favourite drag queens hopped on a bus into the outback.

“It’s always been owned and operated as an LGBTQ venue,” says Imperial Hotel’s Matthew Folino, paying tribute to former owner Dawn O’Donnell – an adored queer nightlife tsar in the 1970s and 1980s before her death in 2007.

“Dawn ran it as one of the first few lesbian venues within the Inner West of Sydney. Priscilla obviously brought it into the limelight – and it’s gone through some tough times with some changes within it – but it’s maintained its historic LGBTQ status just through keeping it as queer as possible.”

So other than the Imperial, where else should visitors head on their tour of queer Sydney? Folino has no trouble reeling off recommendations for LGBTQ venues.

“Sydney’s full of them,” he says. “We’ve got Arq nightclub, Stonewall, Palms, and The Bearded Tit is an incredible venue – they do a lot for the queer space. In terms of suburbs, Newtown, Marrickville, Enmore – every single café has a queer flag in it. Darlinghurst is the queer capital of Australia. Sydney’s just a very forward-thinking place.”

Queer travellers will receive a warm welcome wherever they head in the Harbour City, but these 11 places wave the rainbow flag particularly proudly – starting with the star of Priscilla.

The Imperial has sparkled ever since Dawn O’Donnell got her hands on the keys in 1983. This legendary LGBTQ bar closed for five months in 2015, but new owners the Sydney Collective gave this old queen a head-to-toe makeover in 2018, injecting flamboyant yet contemporary design into this beloved Erskineville institution. The relaunch also added the vegetarian-friendly restaurant Priscilla’s, but didn’t erase the venue’s character, which is most colourfully on display during fabulous Drag ’n’ Dine shows (Wednesday to Sunday), the Drag Xtravaganza on Friday nights, and Explore Yourself Sundays.“The company has really made sure that we maintain queer visibility, activism, drag and a queer voice in the community,” Folino says. “We stand for things that actually matter – we’re not just there to be somebody’s Friday night plans. We donate a lot to charity, we raise money for World Aids Day, we’re constantly involved with not-for-profits and local organisations, and basically we’re trying to be a pinnacle within the community with a strong voice.”

Party like its 1999 at this long-standing gay nightclub, which has been buzzing since just before the turn of the millennium. Located on Flinders Street just off Sydney’s queer epicentre Oxford Street in Darlinghurst, Arq is spread across two jam-packed floors: the Arena upstairs, with its state-of-the-art light and sound systems, and the Vortex downstairs, a more intimate performance space. “Arq is the largest queer club in Australia – I haven’t seen anything of its size,” Folino says. “It’s like a playground for grown queer men to feel safe, have fun and enjoy themselves, really. It’s very let-your-hair-down. It’s somewhere you finish up quite early in the morning and find yourself at the kebab shop down the road, it’s just the place to dance and meet other people.” 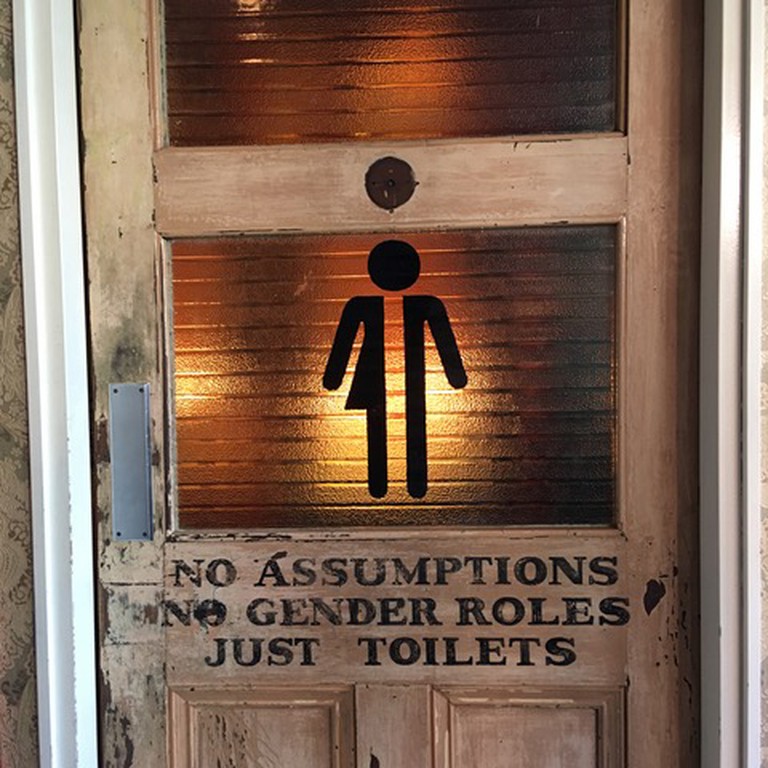 This arty Redfern small bar is as left-of-centre as its name suggests. The Bearded Tit attracts a crowd that’s as diverse as the creations hanging on the walls – from the window of crocheted penises to the taxidermy goat on the wall. An extra spicy Hail Mary leads a quality cocktail list, the food is sourced from local eateries, and the word eclectic doesn’t even begin to describe the rotating roster of artists and performers this place showcases. “The Bearded Tit is very progressive,” Folino says. “They’ve got great ideologies and they’re very forward-thinking. They have a lot of Indigenous Australian performers, they make sure they’re very inclusive of trans performers, binary female and non-binary drag kings, you name it, the Bearded Tit will do it.” 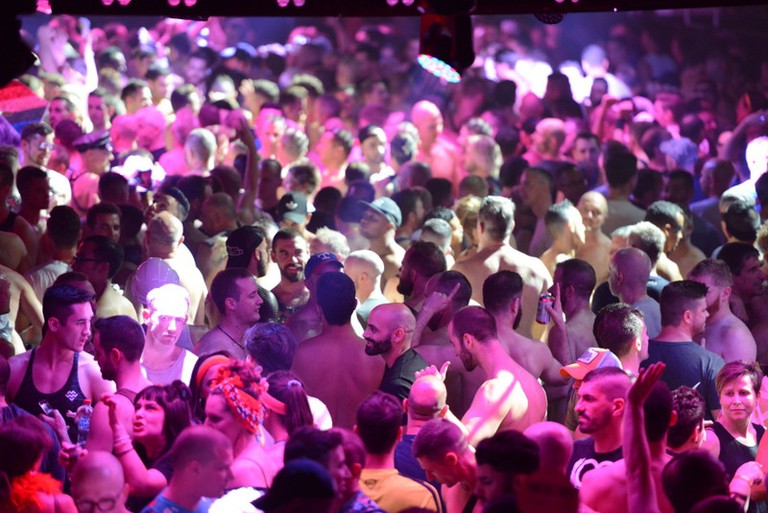 This Oxford Street favourite is “daggy” (eccentric and tacky) in all the best ways. Playing slightly older music for the slightly older party animals, Palms feels like a boozy wedding reception with copious amounts of Kylie, Whitney and Freddie rocking the stereo and an attitude-free mixed gay and lesbian crowd. “Palms is your classic ’80s, ’90s nostalgic throwback party,” Folino says. “The audience there is a bit more mature but it’s very easy going. The older gentlemen usually are a lot more laid-back than the younger ones, so it’s a very relaxed kind of space.”

Those thirstier for a paperback than a pint should visit the Darlinghurst Bookshop, which opened on Oxford Street in 1982 before moving into its Taylor Square location two years later. The shelves are devoted to queer literature, film, merchandise and erotica, but this is so much more than just a place to buy books. The Bookshop Darlinghurst is a vital community resource and safe space in the heart of Sydney’s gayest neighbourhood.

This modern Mediterranean restaurant serves delicious Italian and Greek cuisine smack bang in the middle of the Harbour City’s gay golden mile, but the real attraction is the hospitality. Flamboyant owner ‘Mama’ Colin Paull extends a welcome as warm as the food on the plate, with drag queens delivering the dishes as well as a performance. “You’re served by drag queens, the drag queens come out and serve dinner,” Folino says. “The gentleman who runs it – they call him Mama – he’s so beautiful, he’s such a beautiful Greek-Australian man, and the food is awesome.”

This inclusive, not-for-profit, community-run venue hosts a galaxy of musicians, visual artists, film makers, comedians, DJs and whoever else wants to use to the venue’s stage, bar, rooftop terrace and twin studios. Occupying a warehouse tucked behind Marrickville’s much-loved bowling club, the Red Rattler is also one of the places party people can catch Heaps Gay, the mega-popular queer promoter that pops up at venues across Australian cities. “The Red Rattler has a co-op space kind of vibe,” Folino says. “If you’re throwing a party there, they’ll let you use the space. They’ve had board game nights there, I’ve been myself and they’ve got PlayStations and Nintendos and table tennis, and then other nights they’ve got Heaps Gay. It’s an eclectic space, and it’s a fantastic space as well.”

Legendary gay nightclub the Midnight Shift became another victim of Sydney’s puritanical lockout laws in 2017, before it was snapped up by the Universal Hotels group – owner of other queer-friendly Darlinghurst bars such as the Oxford Hotel, Kinselas and the Brighton Hotel – and re-launched in 2018. The resurrected Universal quickly cemented its reputation as one of Oxford Street’s liveliest nightspots, with a crowded calendar of drag shows throughout the week. “They have a large space,” Folino says. “It’s a nightclub, but it’s also very bar-ish during the day.”

The Colombian is yet another Oxford Street staple, sharing a block with the equally cherished Stonewall Street 100 metres away. This spacious corner bar has converted an old Art Deco bank with huge windows gazing out over the golden mile, which makes for some seriously entertaining viewing late on a Friday or Saturday night. And so do the DJs, singers and dancers on the stage, including a night to celebrate trans performers on the first Thursday of the month. “That’s the first venue I ever went to when I was 18 – I was called Captain Colombo for quite a while!” Folino laughs. “It’s just an iconic venue, it’s up there with Stonewall.”

This ocean pool has been a ladies-only safe space since it opened in 1886 – a private corner of the Coogee cliffside that’s particularly popular with lesbians. For gay men, Lady Jane Beach on the South Head peninsula in the Eastern Suburbs, Little Congwong Beach in La Perouse in the south of the city, and Obelisk Beach on the Lower North Shore are three queer-friendly and clothing-optional strips of sand. And while these swimming spots have a distinct rainbow streak, all of Sydney’s beaches – much like the city itself – are totally safe for queer visitors. “It doesn’t matter where you are in the city, you’re generally very safe,” Folino insists. “As a queer male who’s lived for six years here in the big smoke now, I’ve never felt intimidated or threatened because of my sexuality. It’s just a very safe city to be in.”