The History Of The Perth Town Hall In 1 Minute 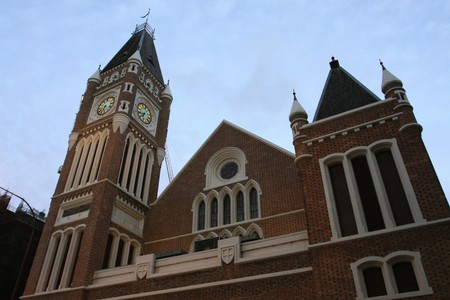 The elegantly restored heritage venue of Perth Town Hall is unlike any other town hall in Australia. Not only is this Australia’s only Gothic-style town hall, but it is the only hall to be built by convicts. Located on the corner of then-Howick (now known as Hay) Street and Barrack Street, it has been said that this hall was almost built on the same spot where a tree was cut down to commemorate the Foundation of Perth in 1829.

Since 1829, this spot has been a popular place for political and social activity within the colony. In 1866, Governor Hampton put forward the motion to build a hall dedicated to the citizens of Perth. Designed by the Supervisor of Public Works, Richard Roach Jewell, and overseen by the Clerk of Works, James Manning – who was also the architect for Fremantle Prison – the construction of the hall began in 1867. Free settlers in Perth laid the foundations for the hall before the construction of the building commenced. While construction was initially planned to take 12 months to complete, the full construction took three years, with Governor Weld officially opening the hall on Foundation Day, June 1st, 1870.

Described to hold a combination of ‘Victorian Free Gothic Style, with strong medieval overtones’, the architecture of the Perth Town Hall has been compared to many village public buildings across Europe from the 14th–16th centuries. 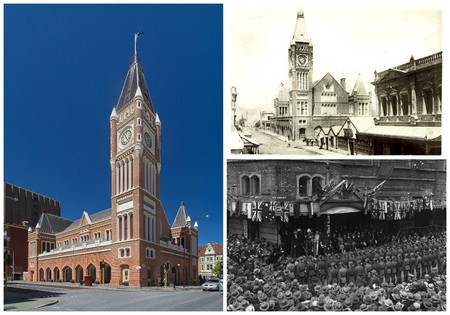 In 1890 the City Council discussed building a larger hall; however, after a ‘cash and land swap arrangement’ was agreed between the Council and the State Government, the community responded negatively. Due to the large response, the Council found a new use for the hall: housing a fire brigade, the tram office, insurance brokers, and offices for several Council Officers and many more tenants.

With the preparation to move the Council in 1924, extensive alterations – including incorporating shops on the lower level – were made to the hall, which The West Australian newspaper once described as ‘municipal vandalism’. In 1955 more shops were added, and following this, the R&I Tower stage one commenced in 1959, building a tower 13 storeys high.

The National Trust classified the Town Hall in 1973, and by 1978 it was placed on the Register of the National Estate with the agreement to restore the hall, including the removal of the R&I Building in 1994/1995. As a result a major restoration and refurbishment program commenced and was completed in 2005.

Today the hall is a popular venue for functions, banquets, public forums and weddings.