The History Of The Manchester Unity Building In 1 Minute 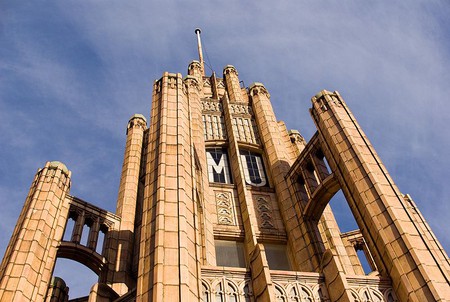 On the intersection of Collins Street and Swanston Street is a Neo-Gothic building bearing an uncanny resemblance to Chicago’s Tribune Tower. Built during the Great Depression, the Manchester Unity Building was designed by architect Marcus Barlow for the Manchester Unity Independent Order of Oddfellows. The site was purchased for £250,000 and construction began midnight on the 1st of January 1932. The building process marked the first occasion where a construction program schedule was used in Australia and builders desperate for work due to the Depression worked around the clock in eight hour shifts to ensure that the ground and first floor mezzanine were open for trade by September that same year. One floor was built every seven to ten days with 12 floors built in total. The building is 132 feet tall and when it was finished it became the tallest building in Melbourne. Today is stands as a one of Melbourne’s most architecturally impressive buildings.

Marcus Barlow (1890-1954) took full advantage of the innovations and technologies available to him at the time and was the first Melbourne architect to use escalators and air conditioning in his buildings. Marcus Barlow was responsible for the speedy construction of The Manchester Unity Building, spending time beforehand setting out specifications and a detailed schedule which were followed exactly and led to a record setting construction phase. The record of building one floor every seven to 10 days was not broken until the 1980s. Barlow’s style ranges from classic to early modernist and he was inspired by the concrete jungles of New York and Chicago. Barlow also designed the Century Building.

The Manchester Unity International Order of Oddfellows in Victoria was founded on the 7th of December 1840 by eight men, including publisher Thomas Strode and Mayor of Melbourne Augustus Greeves. The 28,000 members took pride in tradition and their motto was ‘Friendship, Love and Truth.’

The site was excavated and the original building demolished in 1931 and construction began in January. By December the building was complete, and was the first in Melbourne to feature an escalator, with one still in service. 250 tons of mother of pearl colored terracotta tiles cover the exterior and the interior includes Australian marble flooring and intricate mosaic work. The bay windows give the second floor its distinctive look and there are large plate-glass windows on the first floor. Originally the building was fitted with 2500 lamps and sand-blasted designs decorated the ground floor arcade. The building is 132 feet and the tower and spire stretch a further 78 feet. In comparison the Tribune Tower, which inspired the Manchester, is 462 feet and has 36 floors. 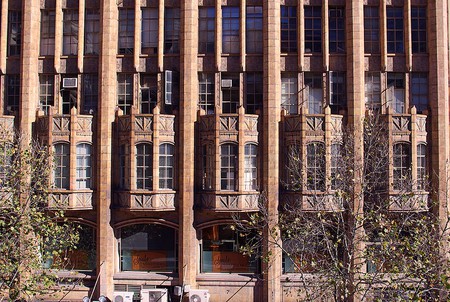 Originally the ground and mezzanine levels were home to 23 shops and seven kiosks and the building served as the headquarters to The Manchester Unity International Order of Oddfellows. On the 12th floor there was a rooftop garden café fitted with a fountain, pond and Japanese palms, and the basement served as a tea room and café. These days the building’s most visited tenants are Dr Kia Pajouhesh’s Smile Solutions which operates across 25 suites. Other tenants include Rob Mills Architects, Andronas Conservation Architects and several jewelers. The level 11 boardroom has been restored and is still in use and features the original table.