The History Of The Busselton Jetty In 1 Minute

One of Western Australia’s most recognisable icons is the heritage-listed Busselton Jetty. Despite facing cyclones and fires, this once-working jetty is now exclusively used for recreation and tourism in the protected waters of Geographe Bay and continues to stand as the longest wooden piled jetty in the Southern Hemisphere.

Following the settlement of the Busselton/Vasse region in 1832, the necessity of a jetty in the region was recognised, and by 1864, construction began. By the end of 1865, the jetty was completed at 176 metres in length. As more ships began to travel into Geographe Bay, they realised the water was too shallow, requiring the first extension of the jetty in 1872; however, this was deemed inadequate, and a further 143.3 metres were added in 1875. With the continuing change in water levels, further extensions were required with a total of 1,163.1 metres added between 1884 and 1896.

Upon conducting a strength test in 1907, the jetty’s weaknesses were revealed, resulting in a ‘Skeleton Jetty’ proposed in 1909, and approved, adding a rail line for steam trains east of the jetty in 1911. Also in this year, a further 603 metres was added and intensive dredging of the harbour commenced, allowing larger ships to accompany the boom in the timber and tourism industries. It wasn’t until 1960 that the last extension of 16 metres was added, bringing it to 1,841 metres in length. In 1972, the Busselton Jetty was closed as a shipping port after serving around 5,000 ships in its 100 years. 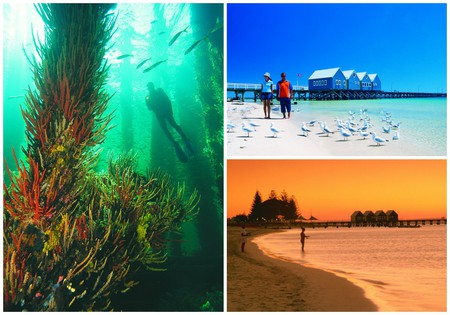 With the government’s proposal to demolish the jetty, the community stood up against the decision and formed the ‘Save Our Jetty’ group. However, shortly after this, Cyclone Alby destroyed much of the jetty’s oldest section beyond repair in 1978. Almost ten years after this incident, ’90 [percent] of people surveyed by the Shire of Busselton considered restoration and protection of the jetty was the most important project for the Shire,’ resulting in $500,000 being allocated to rebuild it. With the formation of the Busselton Jetty Environment and Conservation Association, further funds were raised, and the first major reconstruction occurred in 1990. In 1999, a large fire destroyed the jetty, isolating the last 150 metres of it. Despite this, the Underwater Observatory, 13 metres deep, was constructed and opened in 2003 encouraging visitors to discover over 300 marine species living around the jetty.

Come 2008, Premier Colin Barnett recognised the importance of the jetty, supplying a grant to restore it to ‘as new’ condition, and by 2010, the refurbishment began. The following year, the jetty was reopened to the public with many returning to continue fishing, swimming, walking, snorkelling, and diving as they have done so for many years.