The Hairy History Of The Movember Movement 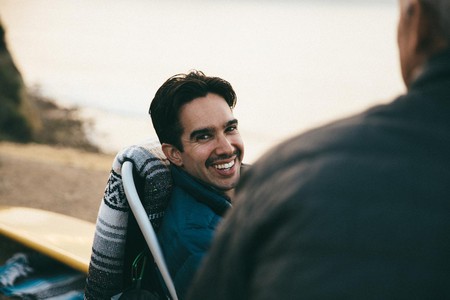 This is the hairy story behind a band of Aussie men who decided to ‘Grow a Mo, save a Bro.’ Since its humble beginnings in 2003, the charity Movember has grown drastically, encouraging people to grow and groom their moustache for the full 30 days of November, whilst raising funds for and awareness of men’s health.

After moustaches had all but disappeared from fashion trends across the world, Travis Garone and Luke Slattery discussed the attempt to bring it back into fashion over a beer in Melbourne. With ambition to bring the Mo (moustache) back, Garone sent out an email titled ‘Are you man enough to be my man?‘ finding 30 guys willing to participate in 2003. With such enthusiasm, the first Mo Bros (‘men who grow a moustache for Movember’) decided to formalise the concept and grow this idea into supporting a cause.

Inspired by a friend’s mother who was said to be fundraising for breast cancer at the time, the team began to research men’s health issues upon which they agreed to formally support prostate cancer. Laying out the rules of Movember – which are all still in place today – Garone registered the Movember Foundation and created a website, where they then agreed to charge $10 to grow a Mo and support the cause. By 2004, they approached the Prostate Cancer Foundation of Australia (PCFA) who agreed to accept funds starting that year, but who were not an official men’s health partner…yet. 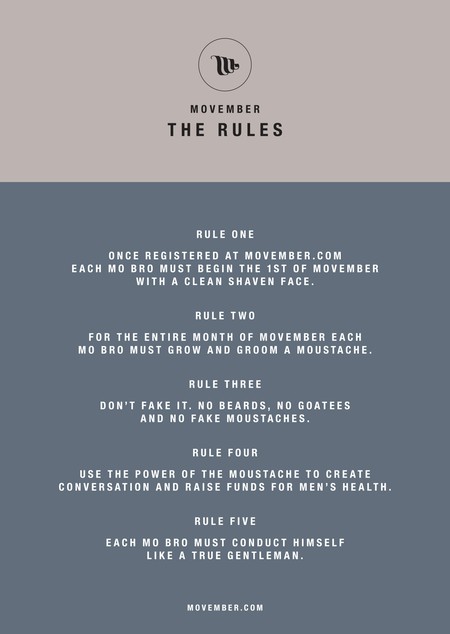 In 2004, the team handed their first Movember cheque to the PCFA, offering the largest single donation the PCFA had ever received. Within these two years they were joined by 480 Mo Bros and Mo Sisters (women supporting the cause), raised $54,000 and funded six men’s health projects. Taking Australia by storm, Movember grew drastically in 2005, bringing their total number of participants, since 2003, up to 9,795. It was also during this year that the PCFA became the Foundation’s first official men’s health partner.

Developing the official tagline – ‘Changing the face of men’s health’ – in 2006, the team began to research further into men’s health, discovering that depression was a significant issue among men in Australia. As a result they gained beyondblue, ‘the national depression and anxiety initiative,’ as their second partner. During 2006, Movember received their official charity status within Australia and officially launched in New Zealand, partnering with Prostate Cancer Foundation of New Zealand. Following this, they expanded to the United States (Prostate Cancer Foundation), Canada (Prostate Cancer Canada), United Kingdom (The Prostate Cancer Charity) and Spain (FEFOC), whilst also establishing the Movember Board. 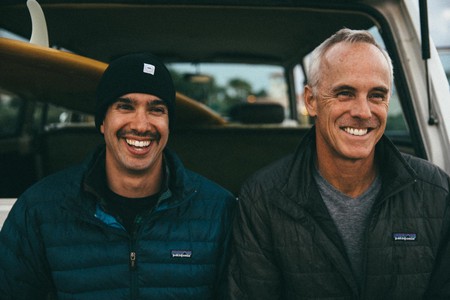 In the US, Movember obtained their official charity status in 2009, adding LIVESTRONG Foundation as their second partner. However, it was the significant research breakthrough of 2009 by the University of Michigan’s Comprehensive Cancer Centre (funded by Movember) that saw the identification of over 25 different types of prostate cancer.

Following this, Movember launched their first directly funded program, Global Action Plan, ‘created to accelerate prostate cancer research outcomes through global collaboration,’ as well as officially launching in South Africa (Cancer Association of South Africa), Finland, the Netherlands and Czech Republic in 2010, and Belgium, Denmark and Norway in 2011. After completing the world’s first Prostate Cancer Genome Mapping Project, explaining how prostate cancer works, and gaining charity status in Canada, England, Scotland and Wales, the charity was ranked in the ‘Top 100 Best NGOs In The World’ list by the Global Journal in 2011, based on their impact, sustainability and innovation.

In 2012 they were once again ranked in the ‘Top 100 Best NGOs’ – out of the estimated five million NGOs across the world – and continued to expand, launching in Austria, France, Germany, Hong Kong, Singapore, Sweden, Switzerland. The following years saw Movember be awarded with the ‘Social Force of the Year’ award from GQ Australia in 2013, and ranked 72nd on the ‘Top 500 NGOs In The World’ in 2014. 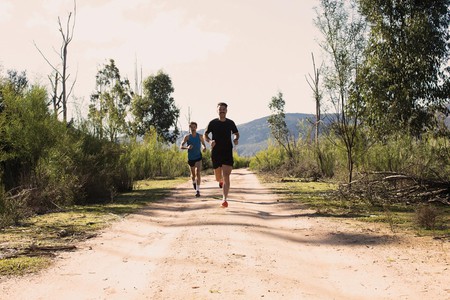 Bringing the Mo back to life – whether you sport the classic moustache, you sacrifice your beard or you get creative with your Mo – the charity today hosts campaigns in 21 countries. Since 2003 almost five million people have participated, raising over $735 million and funding over 1,000 men’s health projects, with a broadened key focus on prostate cancer, testicular cancer, physical inactivity and poor mental health.

In 2016, the team introduced a new way for the Mo Sistas (women) to show their support in participating, with MOVE for Movember. Throughout Movember, women are encouraged to move every single day of the month – making it 30 moves in 30 days – whether you go out for a walk or a full workout, nothing is too big or too small. This initiative not only encourages women to be more proactive about this cause, but will provide an opportunity to inspire the men in their lives to encourage them to MOVE too and ‘take control of their physical and mental well-being.’ What are you waiting for? ‘Grow a Mo, save a Bro.’ 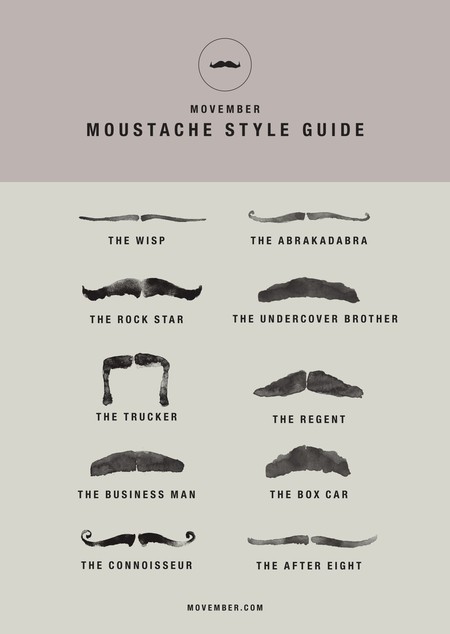 Movember Style Guide | Courtesy of Movember
Give us feedback