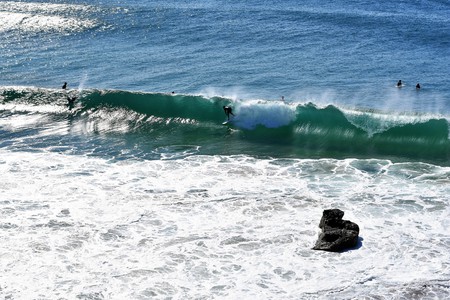 New South Wales beaches are being patrolled by drones | © Pixabay

If you’re heading to Australia’s beaches any time soon, you’ll probably expecting to see beautiful sand, clear blue water, and surfers competing for waves. But, if you look up, you may see something less expected: a drone or two.

Drone usage is increasing all over the world—for sports, photography, and even delivering goods. In Australia, they’re being flown over beaches for multiple reasons.

In January, two teenage boys in New South Wales, Australia, were saved from drowning when a new lifesaving drone dropped an inflatable pod for them. Lifeguards were still being trained to use the device when a member of the public saw the two boys struggling about 700 meters from the coast of Lennox Head.

The lifeguards were able to send the drone to hover over the boys and drop an inflatable rescue pod, which they used to get safely to shore. The drone’s camera recorded the whole rescue. John Barilaro, the deputy premier of New South Wales, described the rescue as historic: “Never before has a drone fitted with a flotation device been used to rescue swimmers like this.”

“The Little Ripper UAV certainly proved itself today it is an amazingly efficient piece of lifesaving equipment and a delight to fly,” Jai Sheridan, the lifeguard supervisor who piloted the drone said. “I was able to launch it, fly it to the location, and drop the pod all in about one to two minutes. On a normal day that would have taken our lifeguards a few minutes longer to reach the members of the public.”

In December, the New South Wales government announced it had invested around A$430,000 ($340,000/£247,000) in a fleet of Little Ripper drones that could be used for a number of purposes. The flotation pods will be one of the chief uses, and alarms and loudspeaker drones will also be used in the future. They are also being used to spot sharks.

The shark-spotting drones are equipped with artificial intelligence that can distinguish sharks from other marine life. The researchers behind the program believe they can make shark identification much more efficient, as humans can only spot a shark from an aerial image with 20–30 per cent accuracy. The drone system is said to detect sharks with 90 per cent accuracy.