The Coolest Neighbourhoods in Melbourne 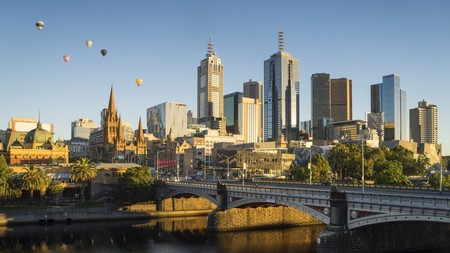 The words ‘cool’ and ‘Melbourne’ go together like toasted sourdough and smashed avo, a laneway and graffiti art, or a cold beer and a warm pie watching the footy at the MCG. Sydney might boast about beaches and weather, but its southern neighbour lays claim to art, food, coffee, music and sport.

So much of Melbourne was built in the Victorian style by the riches that arrived with the Gold Rush in the 1850s, but a wave of European migration after World War Two – then the irrepressible rise of the speciality coffee-swilling hipster in more recent decades – have made the city what it is today. And a mosaic of colourful neighbourhoods gives Melbourne a unique cultural texture.

From the salubrious streets of the south to the hipster hubs of the north, the eclectic east to the working-class west, these are the 10 coolest neighbourhoods in Melbourne, Australia. 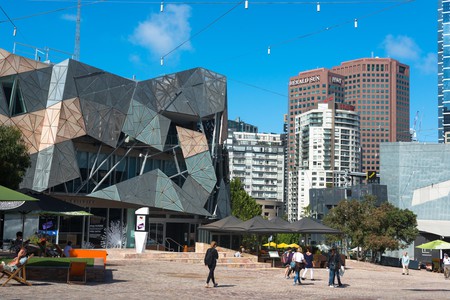 When Anthony Bourdain visited Melbourne to film an episode of No Reservations in 2009, he made a beeline for Brunswick’s Sydney Road. “In a boom of post-war immigration, many immigrant families established business along this stretch of road just north of the city centre,” Bourdain explained.“And the number and variety of eateries here have continued to diversify.” The food tourist par excellence sank his teeth into Lebanese icons Town Hall Kebabs and A1 Bakery, but that was only an entrée to the culinary delights that make Brunswick Melbourne’s coolest foodie destination. Try Tom Phat, Rumi, Los Hermanos, 400 Gradi, Brunswick Mess Hall, and plenty more top-drawer eateries. And there’s so much more to this old-school, working-class neighbourhood turned hipster haven, thanks to speciality coffee shops Kines, Code Black and Wide Open Road, shabby-chic retailers like Lost and Found Market, American Vintage and Dejour jeans, and watering holes such as Howler, the Spotted Mallard and Thunder Road Brewery. 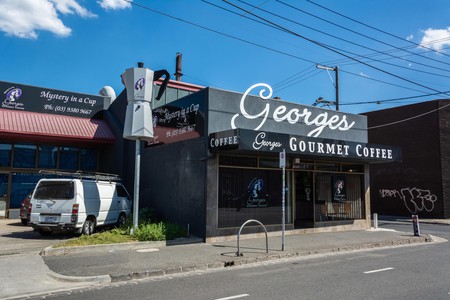 As Richmond’s football club marched towards a drought-breaking premiership in 2017, journalist Jonathan Horn summed up this sports-mad neighbourhood: “Once known as Struggletown, it’s a hodgepodge of a suburb, with its footy pubs, converted warehouses, social housing blocks, hipster bars, workers cottages, cashed-up tradies, Vietnamese restaurants and hot yoga studios.” Footy is sewn into Richmond’s fabric, with the hulking Melbourne Cricket Ground routinely filled with 100,000 fanatics. But in the shadow of this revered sporting cathedral lies one of Melbourne’s most eclectic communities — catch a gig at the Corner Hotel, hunt a bargain at the vintage stores along Bridge Road, grab a bowl of phở on Victoria Street, then sip on craft beer at micro-breweries like Moon Dog, Mountain Goat and Burnley Brewing. 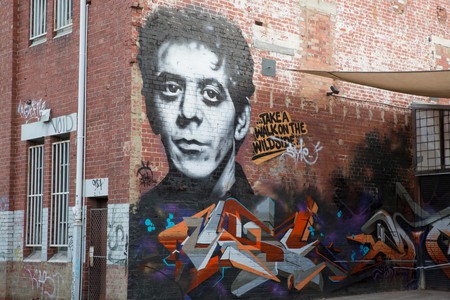 At the turn of the 20th Century, St Kilda was to Melbourne what Coney Island was to New York City, right down to the sea baths and Luna Park fairground overlooking the sandy beach. But like the rest of the city, migration quickly changed the face of the neighbourhood. Alongside Jewish delis and cake shops, venues like the Espy and the Palais Theatre turned St Kilda into a live music hub in the 1960s and 1970s, before backpacker bars and seaside pubs kept the party going in recent years. “Few neighbourhoods can claim to have the mix of nightlife, cafés, lifestyle with the beach at your doorstep,” says Melbourne street artist, Ling, whose mural masterpieces can be spotted all over Melbourne and on his Instagram.

St Kilda is the location of the Luna Park, the famous fairground in Melbourne | © KC Hunter / Alamy Stock Photo

In her acclaimed debut novel Frankie (2016), local author Shivaun Plozza described a tram making a sudden stop in Melbourne’s bohemian inner north. “I hope no one inside took a tumble,” she wrote. “Then again, it’s the 86 and probably full of hipsters. They’ll land softly on their beards.” No part of Melbourne is as synonymous with this maligned hipster tag as Fitzroy, which became Melbourne’s first suburb in 1839, but is much more famous for its new wave of fixie-riding, natural wine-drinking, Dejour jean-wearing residents that have moved in over the past two decades. Look up any list of Melbourne’s hottest places to eat and drink, and Fitzroy is always generously represented: Naked For Satan, Neighbourhood Wine, Miss Katie’s Crab Shack, Black Pearl, Cutler and Co and Belle’s Hot Chicken are all on the menu. 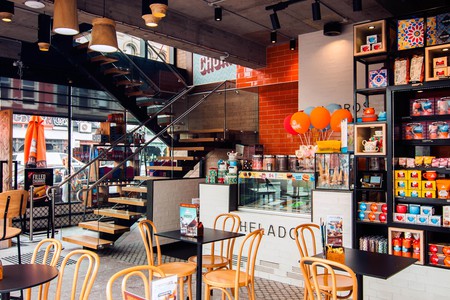 Franco Cozzo (of those legendary baroque furniture ads) is the de facto mayor of Footscray, arriving in Australia from Sicily with nothing in his pocket before becoming the neighbourhood’s favourite son. The furniture king’s tale is typical of Footscray, an industrial hub that’s welcomed people from the Mediterranean, the former Yugoslavia, Vietnam, Africa and every other corner of the globe. This multiculturalism makes the area a must-visit for food-lovers, dishing up everything from cannoli at T Cavallaro & Sons to Vietnamese at Phở Hung Vuong Saigon and unbeatable burgers at 8bit. “It’s the inner west’s hipster haven,” Ling explains. “Surprisingly close to the CBD. Affordable real estate – or at least was affordable – and a multicultural melting pot with food to match.” 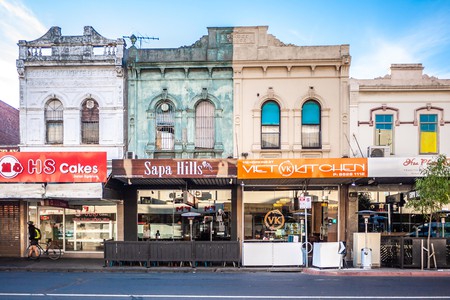 Once an industrial area of Melbourne, Footscray has welcomed people from every corner of the globe over the decades | © SHUANG LI / Alamy Stock Photo

“Chapel Street reminds me of the East Village, Sunset Strip and Haight-Ashbury all combined into one juggernaut,” New York photographer Spencer Tunick said when he was organising one of his large-scale nude shoots on Melbourne’s premier shopping drag. South Yarra is a heaven for shopaholics, with upmarket boutiques and cafés hugging Chapel Street for four kilometres (2.5 miles) between Richmond in the north and St Kilda in the south. This neighbourhood is certainly the most exclusive on this list but the parade of cutting-edge designers like Zimmermann, Gorman and LIFEwithBIRD protect its cool factor. Prahran’s market and Windsor’s vintage stores will lure tireless shoppers to these nice nearby neighbourhoods, too. 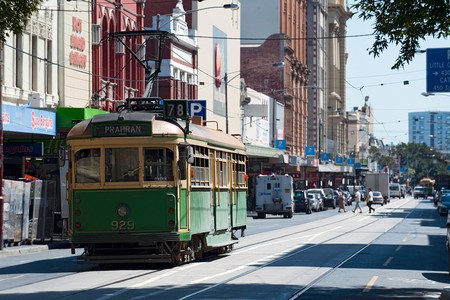 Coffee is a Melbourne-wide obsession. However, it wasn’t always that way. In fact, Carlton’s University Café imported Australia’s first European coffee machine in the early 1950s – the cornerstone of the caffeine addiction that’s gripped the city in decades since. “Carlton is traditionally the Italian centre of Melbourne, although this is less relevant these days,” Ling says. “That said, Lygon Street is still home to numerous restaurants, including the recently renovated King & Godfree.” Like so much of Melbourne, Carlton was built by the Gold Rush in the 1850s – the gorgeous Carlton Gardens and World Heritage-listed Royal Exhibition Building are evidence of that – but became cool thanks to post-war immigration, as the strip of cafés and pizzerias along Lygon Street became Melbourne’s Little Italy and transformed Australian cuisine forever. 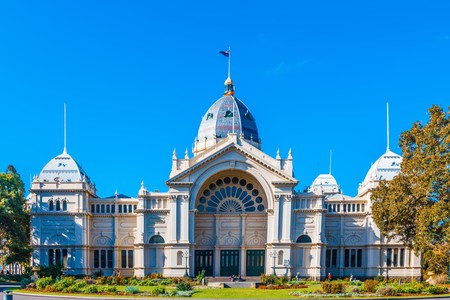 Collingwood shares its name with the most hated football club in Australia, but don’t hold that against it. Sitting just east of Fitzroy in Melbourne’s uber-cool inner-north, this once working-class suburb has swapped flour mills and Fosters breweries for eccentric eateries and quirky boutiques along stylish Smith Street, without losing live music institutions like the Tote, the Bendigo and the Gasometer. Another permanent feature is the Collingwood Magpies, the biggest AFL club in the country, and a punching bag for rival fans. “I loved the gritty, old-fashioned, working-class feel,” wrote Nathan Buckley, once a legendary Magpies player and now their coach. “There was no glitz or glamour and the facilities were primitive, but I ate that up.” 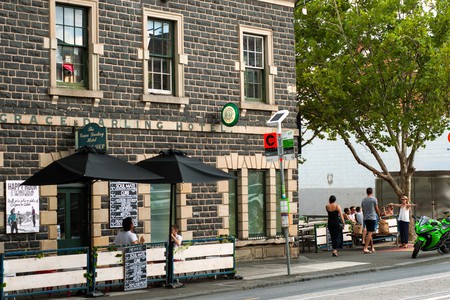 Once a working-class suburb, Collingwood is now famous for its innovative eateries and independent boutiques | © Thomas Cockrem / Alamy Stock Photo

This leafy suburb surrounds the unmissable South Melbourne Market (“Get some dim sum,” Ling says), which has been selling some of the city’s freshest produce since way back in the 1860s. A historic hive of Victorian-era streetscapes, South Melbourne also offers elite coffee joints like St Ali and Chez Dre plus renowned restaurants such as Meatworksco and Claypots Evening Star with the lakefront Formula One grand prix race track next door in Albert Park. 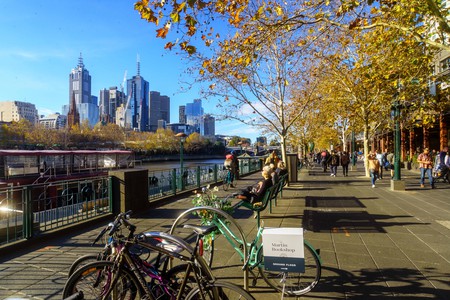 The CBD claims most of Melbourne’s big-ticket attractions: Flinders Street Station, Federation Square, Queen Victoria Market, Royal and Block Arcades and the Eureka Centre across the Yarra River on Southbank. But that’s not what makes it cool. The city centre also boasts more than its fair share of top speciality coffee shops – Dukes, Brother Baba Budan and Market Lane among the best – as well as world-class street art on the walls of laneways like Hosier, Caledonian, Union and AC/DC Lanes. “Known for its laneway culture, the CBD is a great place to explore and find new places tucked away off main streets,” says Ling, who’s responsible for plenty of this colour. “Shops, pubs, clubs, food, something for everyone – whether down the laneways or on main streets, the CBD has whatever you’re looking for.” 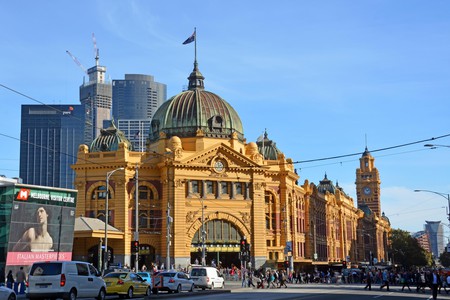 All the major attractions, from Flinders Street Station (pictured) and Federation Square to the Royal and Block Arcades and the Eureka Centre, are concentrated in Melbourne’s CBD | © Nigel Spiers / Alamy Stock Photo
Give us feedback