The Best Restaurants in Manly, Sydney 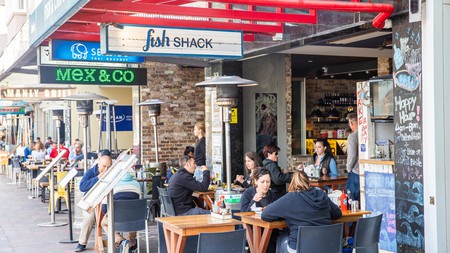 Sean Miller grew up in Los Angeles, but after a university exchange in Sydney, he moved to Manly, a little peninsula north of the city in 2008, where set about building his burgeoning restaurant empire. He reveals his favourite spots on the Northern Beaches.

“I love Australia. The surf is good, the people are awesome, the weather is great. It’s similar in that way to Southern California,” says Sean, who runs Manly eateries Chica Bonita, Sunset Sabi and Busta with his business partner, Luke Miller (they’re not related). “The beauty and the lifestyle and the people and the energy – Manly is the epitome of the surf-side, beachside community with some of the most beautiful beaches you could live near in a metropolitan area. Shelly Beach has got to be one of the world’s most beautiful beaches, where you’re just a 20-minute commute from the city centre. It’s insane.”

Manly’s dining scene is a reflection of its residents. While fine-dining restaurants are a ferry ride away in Circular Quay in Sydney city centre, the streets surrounding Manly’s wharf are populated by laid-back diners straight off the sand. “Most of what’s on offer is very well suited to the beachside, surfy, sandy-feet, no-shoes-on customer,” Sean says.

“A lot of places have al fresco dining and healthier menus – not just lattes, but your turmeric and chai lattes. It’s that kind of a place.”

Here are Sean’s favourite places for a meal in Manly, beginning with three of his own. 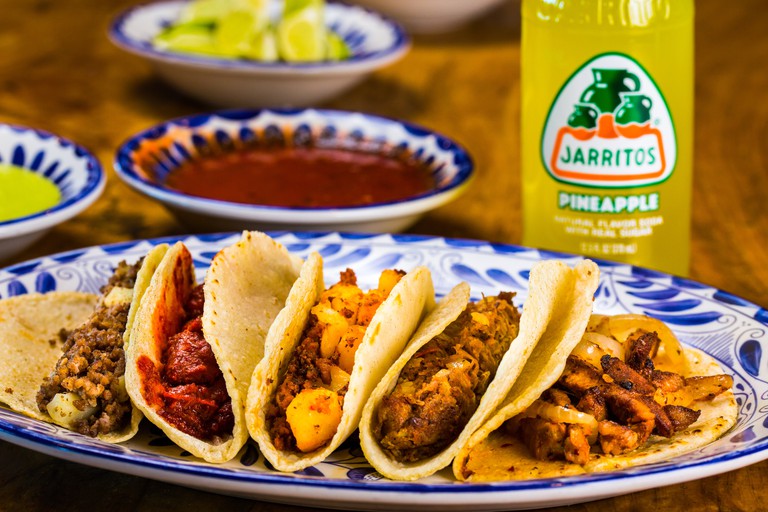 Sean’s first restaurant opened in 2012 – a taqueria in a suburb that had been starved of anything similar. Sitting at the top of the Manly Corso connecting the ferry wharf with the beach, Chica Bonita dishes up Mexican and Baja California street food washed down with jarritos and margaritas in its humming exposed-brick space. “I thought there was a good market in Manly for that Baja-style Mexican food,” Sean says. “That is Chica Bonita.”

Sean’s second eatery opened in 2016 to serve another Californian favourite, this time sushi. The Latin American influences on Sun Sabi’s share-style izakaya menu are obvious, and the sunny floor-to-ceiling windows on Pittwater Road supply the breezy backdrop. “That Californian-style sushi is very different to traditional sushi and to the Japanese food that was available in Manly and in Sydney at the time,” says Sean. “Where I grew up, you get a bit more of a Latin, South American influence. And I said to my business partner, ‘Dude, this kind of Japanese food is definitely going to be popular here.’ So we opened Sunset Sabi.”

A few doors down Pittwater Road, on the site of an old milk bar, Sean and Luke’s latest food foray began with one simple motivation: “Our love affair with good Italian food,” Sean says. Busta also filled a vacuum in Manly, serving modern Mediterranean meals in an intimate space instead of the huge bowls of spaghetti and humdrum pizza churned out by the neighbourhood’s other Italian restaurants. “We were, like, ‘You know what, we need to start inserting some freshly made pasta and some good antipasti and work on a menu we can change regularly that can be fun for the locals’,” Sean says. 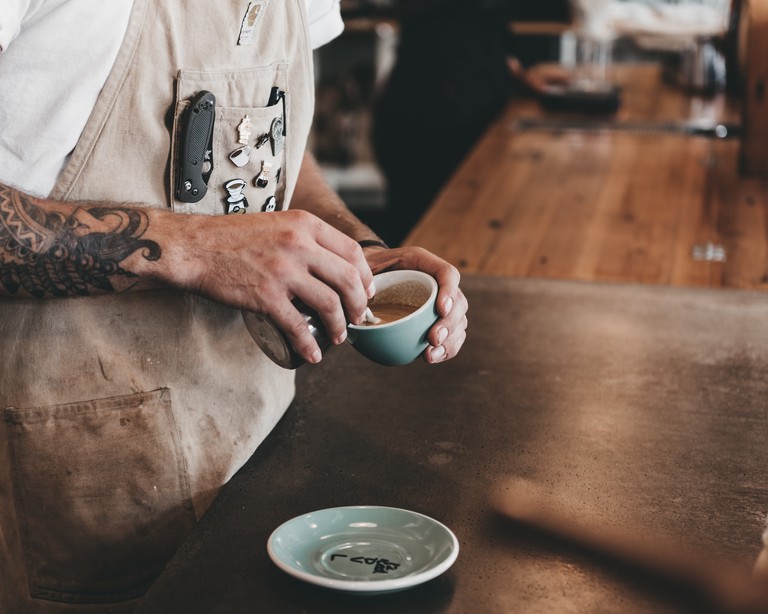 To start the day, Sean recommends a coffee and a croissant at this Rialto Lane bakery, with a window cabinet of treats that’s irresistible to any sweet tooth. The uber-flaky twice-baked croissants accompany bottomless batch brews from Melbourne roasters Okay Coffee, best enjoyed in the al fresco courtyard perfect for sandy-toed locals strolling back from Manly Beach. “They do a mean pastry menu and croissant and probably one of the best cofffees in Manly,” Sean says.

Sean’s other favourite brunch spot is this wholefoods store/café on the Queenscliff end of Pittwater Road. The organic grocer out back hints at what to expect from the menu, with gluten-, dairy-free and vegan options alongside beachy brunch classics – açaí bowls, breakfast buns, eggs benedict and the like. “It’s not health food, but it’s a menu with integrity,” Sean says. “A little bit more effort is put into the dishes. It’s definitely a family spot to go on the weekends because it’s big and has a little grocery store element, and it’s got all the lattes and smoothies and kambuchas. But it’s also really, really good.”

Walk along Marine Parade past the Fairy Bower sea pool and sculpture to reach Shelly Beach, perhaps the Northern Beaches’ most dazzling strip of sand, with a beachfront eatery to match. The Boathouse plates up a modern Australian breakfast and lunch, but the building itself is also worth a visit.“It’s the most beautiful venue in all of Manly – it’s ridiculous how gorgeous it is,” Sean says. “It’s a beautiful old sandstone cottage home, literally on the beach. They’ve got the fireplace going in the morning, even if it’s hot, there’s wild turkeys running around, a waterfall flows out back. It sounds almost contrived but it’s not – it’s gorgeous.”

Perched on Manly wharf with unspoiled views of the ferries cruising in from Circular Quay, Hugos is a local institution. The seafood-heavy Mediterranean menu and cutting-edge cocktail list sit at the higher end of the neighbourhood’s more casual dining scene, but this quintessentially Northern Beaches experience justifies the outlay. “The sun sets over the harbour, everyone’s sitting on the water with a glass of rosé, some oysters, seafood pasta or pizza – that’s pretty much how Manly likes to hang out at night,” Sean says. “That’s Australiana – classic, current, contemporary outdoor seating, great service, great food – Hugos is one of the best operations in Manly, for sure.” 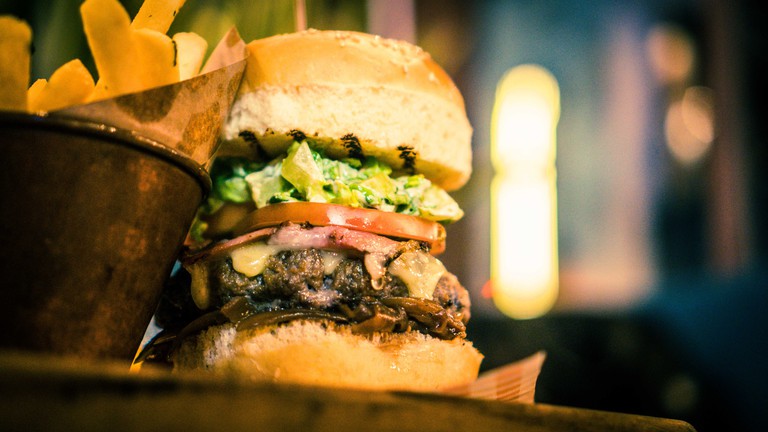 Burgers might not be as fancy as Hugos, but they’re every bit as delicious at JB and Sons. Beginning life in Freshwater in 2015 before moving in across the road from Manly Oval in 2019, this unpretentious diner delivers US-style food plus a broad craft beer and cocktail menu.“It’s probably Manly’s best burger joint,” Sean says. “A little bit Americana, a little bit contemporary Australian. And it’s not just a burger shop – it’s a beautiful setting, you can sit in there and have drinks. It’s very local.”

On the surface, this Sydney Road staple just off the Corso doesn’t look like much. But on the plate, Manly Thai Gourmet has been keeping residents salivating since 2008. Besides a few Aussie-Asian fusion dishes, the menu prides itself on simple southeast Asian classics executed to perfection.“It’s epic,” Sean says. “There’s just plastic chairs around what looks like a closet, with a bunch of people pumping out what is probably some of the best Thai food in Sydney.”

Like Hugos, Garfish is another one of Manly’s more refined restaurants. Sitting a block back from the wharf and peering over the harbour, this elegant eatery celebrates seafood in all forms: fish and chips, snapper pie, Sri Lankan curry, crab linguine, the list goes on. Nab a table by the window to admire the towering pine trees swaying on the water’s edge.“It’s more of your high-end seafood place for your older crowd – it’s fine casual dining,” Sean says. “But if you’re after fine dining, jump on the ferry and go to the city, where there are a lot more options.”