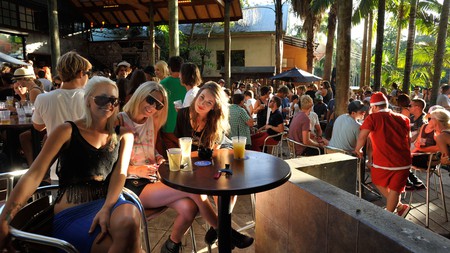 On Australia’s East Coast, Byron Bay beckons – and when the sun goes down, the cool cats come out to party. Our local insiders know just the spots to hit, so join them, cold brew in hand, at the best pubs that this New South Wales gem has to offer.

Once a railway station, now a watering hole, the pub’s aesthetics haven’t lost much in the way of its former layout – that’s including a ticket window that now takes beer orders and a beer garden that overlooks dilapidated railway tracks. Yes, it’s only a six-minute walk to Byron Bay’s main drag of beach, but that’s not even its selling point. Railway Friendly Bar hosts live music seven nights a week and has been doing so for 30 years. They’re not picky when it comes to genre either, so if Monday’s funk doesn’t do it for you, maybe Tuesday’s blues or Friday’s rock sessions will. Never experienced a pale ale down under? Don’t worry, with over 20 beers on tap, the pub staff are well-versed in finding you something that’ll strike your fancy. The chef’s signature beef patties are a local winner, though if you’re hearing the siren call of culinary adventure, order the smoked kangaroo. Recommended by local insider Amy Blyth 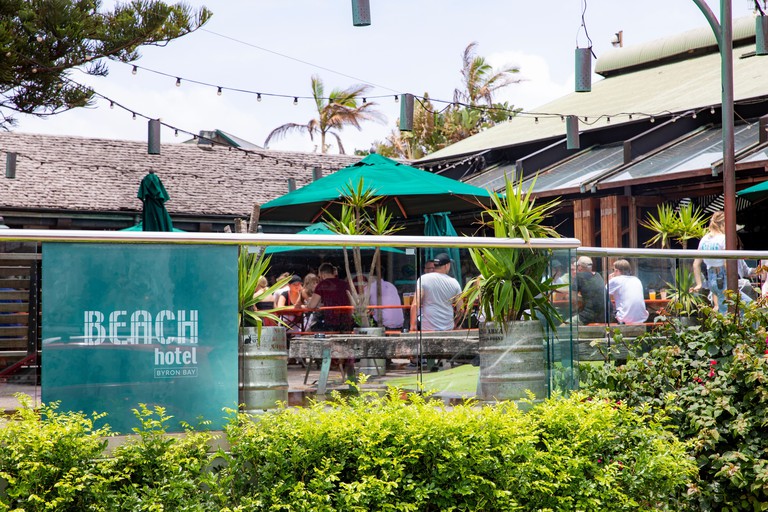 © martin berry / Alamy Stock Photo
Need a pick-me-up in the shade, but don’t want to lose sight of the ocean? Byron Bay’s Beach Hotel overlooks the bay directly, replete with a pub and a spacious outdoor patio adorned with fairy lights. In the evenings, sun-kissed hotel guests and dazed drifters coming in from the beach gather here to dine al fresco on wood-fired pizza and generous portions of sticky pork. Come 7pm, the lights dim, conversation drops and the live music starts, followed by DJ performances that last well into the night. Wake up, hit the beach, repeat. Recommended by local insider Sarah Reid

In 2008, local Aussies Brad, Ross and Jamie set up shop out of a modest shed in Byron Bay – their hometown. With enough frothy beer wisdom to fill barrels of the stuff, Stone and Wood is now a full-fledged independent brewery-cum-pub that hosts tours, tasting sessions and a beer club. The lofty warehouse houses 31 brewing tanks, a canteen (where you can meet the brew gurus themselves) and a chill-out garden in which to sample the fruits of their labour. If you’re short on time, just swing by the brewery and ask for a tasting paddle; you’ll get samples of the original Pacific ale, limited-release beers and a new brand of tequila-soaked brew that shouldn’t taste as nice as it does. Recommended by local insider Amy Blyth 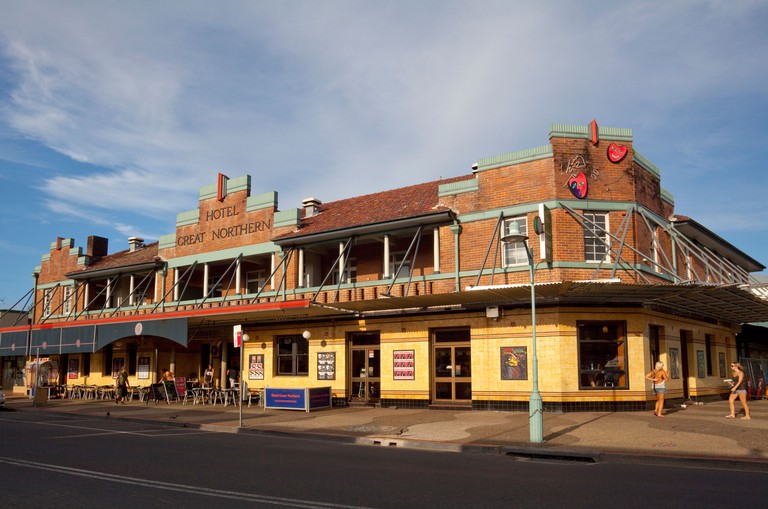 If you can drag yourself away from the beach long enough to venture into town, keep that momentum going and head towards the Northern Hotel. While it dates back a few hundred years, this jaunt was recently refurbished to include a speakeasy-style cocktail bar, where you can put your sensibilities to the test with the infamous Devil Bird – a concoction comprised of dry gin, Campari and Elemakule bitters. The hearty pub food pulls in the punters as does the Backroom, which has seen the likes of PJ Harvey, the White Stripes and Bloc Party, and gives spots to local musicians every evening. Recommended by local insider Sarah Reid

On the outskirts of Byron Bay, in the residential neighbourhood of Suffolk Park, you’ll find the Suffolk Park Hotel. While it’s a bit of a drive, it gives visitors the opportunity to see Tallow Beach where thousands of humpback whales often pass by on their annual migration north from May onwards (so, if you haven’t yet, invest in a decent pair of binoculars). The Suffolk Park Hotel is a family favourite for good reason, with an indoor sports bar, lofty beer garden (for that traditional pub vibe) and fully enclosed playground for the kids. Happy hour deals on cocktails start at 4pm and finish at 6pm. On an unrelated note, their anti-hangover smoothies are as delicious as they are effective. Recommended by local insider Sarah Reid