The Best of Australian Pop Music 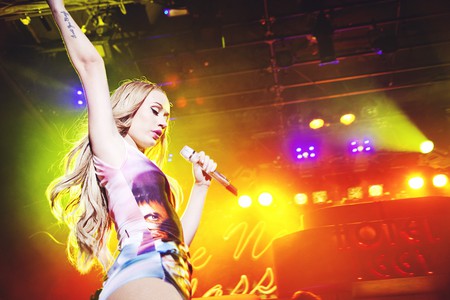 Australia is home to many things: deadly animals, for one, and beautiful beaches, for another. And, as it turns out, Australia has a lively pop music scene, too. Keen to stuff your Spotify stream with a stack of distinctly Australian tunes? Here are eight of the hottest Aussie acts you can check out right now.

Some artists are so big, they’re known by only one name: Cher, Madonna and Beyonce, for example. And since the success of her breakthrough single ‘Chandelier’ in 2014, you can add Sia to that list. The Adelaide native toiled for decades with albums that failed to crack the big time before taking a hiatus to write songs for other artists — David Guetta’s ‘Titanium’ and Rihanna’s ‘Diamonds’ are her two most famous collabs — then hitting the top of the charts at home and in the US with her sixth studio album, ‘1000 Forms of Fear’.

With his angelic voice and dodgy Afro, the Malaysian-born singer made a name for himself as the inaugural winner of Australian Idol way back in 2003, beating cult hero Shannon Noll to the title. And Sebastian’s made every post a winner ever since, releasing nine top-ten albums and six number-one singles, as well as landing a judging gig on The X Factor and representing Australia at Eurovision in 2015.

Compared to the mean streets of Compton or Detroit, the sleepy township of Mullumbimby near Byron Bay is hardly the place you’d expect one of the world’s foremost hip hop artists to hail from. But somehow, Amethyst Amelia Kelly, or Iggy Azalea, managed to forge a rap career in the States, topping Billboard’s R&B charts with her debut album ‘The New Classic’ in 2014 and becoming the first act since The Beatles to rank at number one and two with the first two entries on the Hot 100 singles chart for ‘Fancy’ and ‘Problem’.

James Gabriel Keogh was a gun footballer, a model student and a qualified law graduate, but music fans are glad that the artist, known as Vance Joy, went down the singer-songwriter path instead. His 2013 single ‘Riptide’ was a smashing commercial success, winning a swag of awards and earning the Indie pop performer a lucrative five-album deal with US label Atlantic Records.

If you were born in Australia circa 1990, you remember these identical twins as the soundtrack of your high school dances, pumping out tracks like ‘4ever’ and ‘Hook Me Up’. If you were born this millennium, you know them as a dynamic electropop duo that have successfully reinvented themselves after a lengthy hiatus, charting in both the US and the UK with their third studio album ‘You Ruin Me’ (2014).

Another Australian Idol graduate who managed to parlay her 2006 runner-up medal into a bona fide pop career, signing with Sony to churn out five top-ten albums and 16 top-twenty singles. The Darwin product is preparing to represent her country at this year’s Eurovision Song Contest, and there’s no danger she’ll be overawed by the occasion — Mauboy has previously performed for Oprah Winfrey and Barack Obama and collaborated with Pitbull, Flo Rida and Snoop Dogg.

In 2016, the Gold Coast local was working as a video editor for the local footy team and uploading YouTube videos of her songs from her bedroom. By 2017, Amy Shark won Breakthrough Artist at the ARIA Awards, performed her breakthrough hit ‘Adore’ on US television and toured with Vance Joy in the States. Not a bad 12 months, then.

They say you can tell a lot about a person by the friends they keep — and with remixes for Lorde, Sam Smith and Arcade Fire on his CV, it’s fair to consider Flume a fairly handy musician. The Aussie DJ pioneered the future bass genre on his studio albums ‘Flume’ (2012) and ‘Skin’ (2016), which have earned both critical acclaim and international recognition, including the 2017 Grammy Award for Best Dance/Electronic Album.