The Best Hotels in Melbourne for Every Traveller 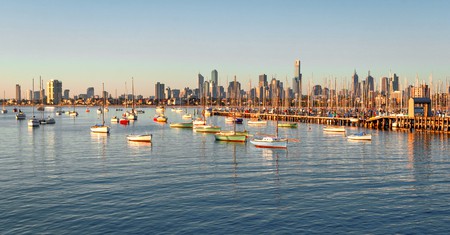 Rooms in rooftop caravans, mouthwatering candy buffets and glass-bottomed pools: Melbourne is Australia’s capital of quirky, and its best hotels do not disappoint.

You’ll spot all the big international hotel brands sparkling across Melbourne’s skyline, but wander along the city’s laneways or escape the central business district (CBD) to discover personality-packed properties that set themselves apart from the identikit chains. Whether you’re exploring the murals of Hosier Lane, the boutiques of Chapel Street or the sands of St Kilda Beach, here’s Culture Trip’s pick of the best hotels in Melbourne. 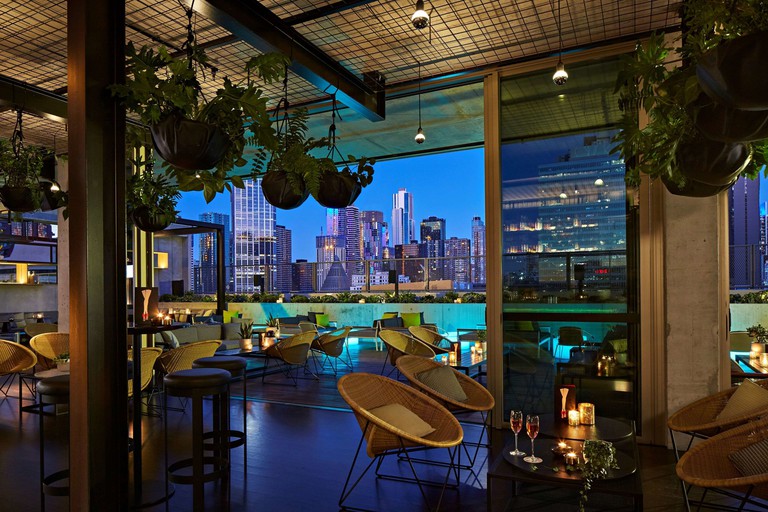 The QT Melbourne is packed full of personality, from the lobby’s peacock sculpture to the graffiti adorning the walls. It even has a talking elevator, which cheekily compliments guests as the doors close. Occupying a former cinema on Russell Street in the fashion district of Melbourne’s inner-city, this five-star hotel’s 188 industrial-chic rooms are every bit as stylish as the boutique retailers that surround them, boasting bespoke furniture, polished concrete and his-and-hers sinks in the sleek slate bathrooms. For refreshments, head to Pascale Bar and Grill, The Rooftop at QT, The Cake Shop and the Hot Sauce laneway bar. 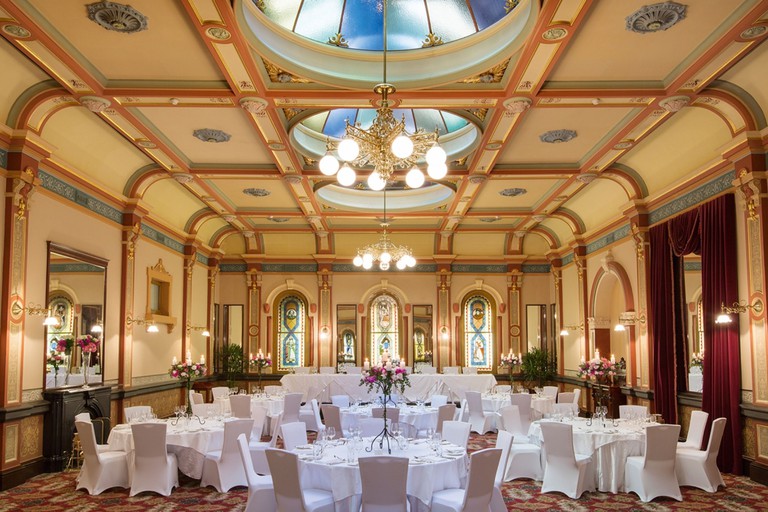 King George VI, Sir Donald Bradman, Meryl Streep, Muhammad Ali… when royalty comes to Melbourne, they spend the night at The Windsor. Dating all the way back to 1883, it’s Australia’s last surviving grand hotel. Indeed, it feels like a relic of the 19th century, from the 180 opulent rooms to the stately One Eleven tea lounge, which has served three-tiered stands of freshly baked scones, ribbon sandwiches and savoury pastries for as long as The Windsor has been open. The hotel is located on Spring Street, across the road from Victoria’s Gold Rush-period Parliament House, and its rates are surprisingly affordable. 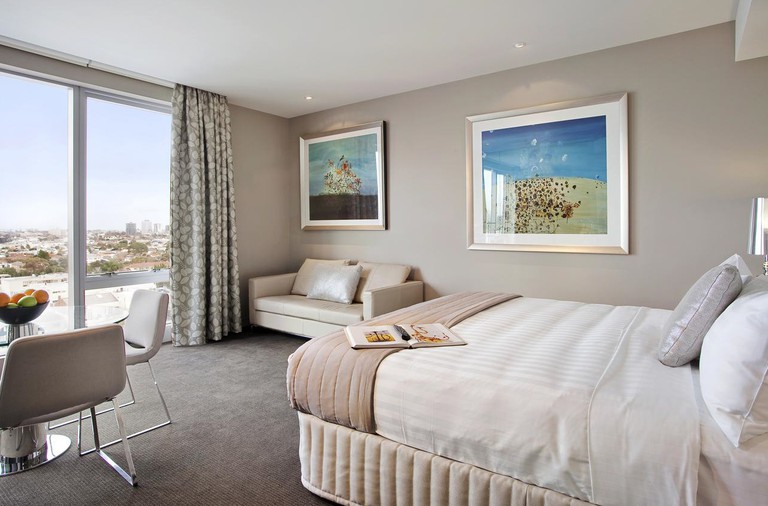 The Olsen is part of the Art Series boutique hotels scattered throughout Melbourne. A playful masterpiece by legendary Australian landscape artist John Olsen hangs in each of its 222 rooms. This priceless art collection is just one of the property’s selling points. Situated right in the thick of the South Yarra action – a glass-bottomed pool hangs over Chapel Street, a premier shopping thoroughfare – The Olsen also offers the freshest regional produce at its Spoonbill Restaurant and Bar, an array of spa treatments at Norbu Urban Retreat, and even Smart car, pram and vintage bike hire. 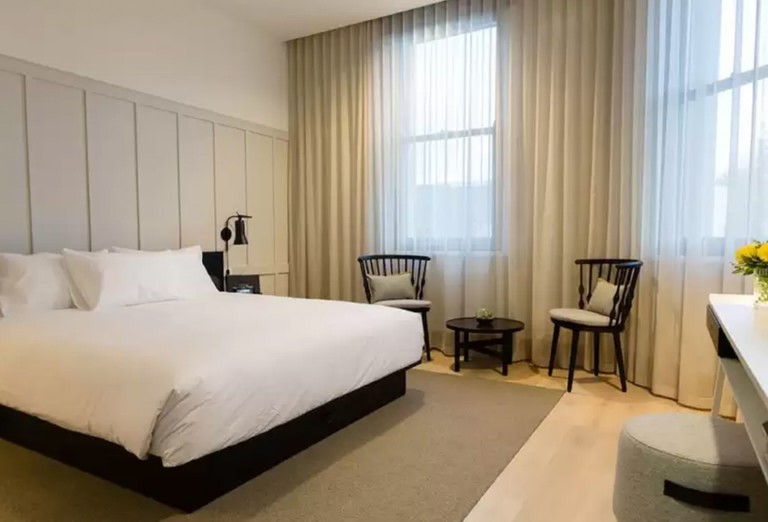 From the outside, the Coppersmith looks like a pub. You wouldn’t be far off in thinking that: the Cricket Club Hotel, a 19th-century boozer/guest house, once stood here, after all. Step inside and you’ll find a high-end boutique hotel that offers 15 rooms kitted out with custom-designed wall lamps by Ross Gardam, ottomans by Jardan and tables by Oak & Elm. Downstairs, a bar and bistro have replaced the old pub, swapping pots and parmas for fancy French fare and a well-stocked wine cellar.

The Lyall Hotel and Spa 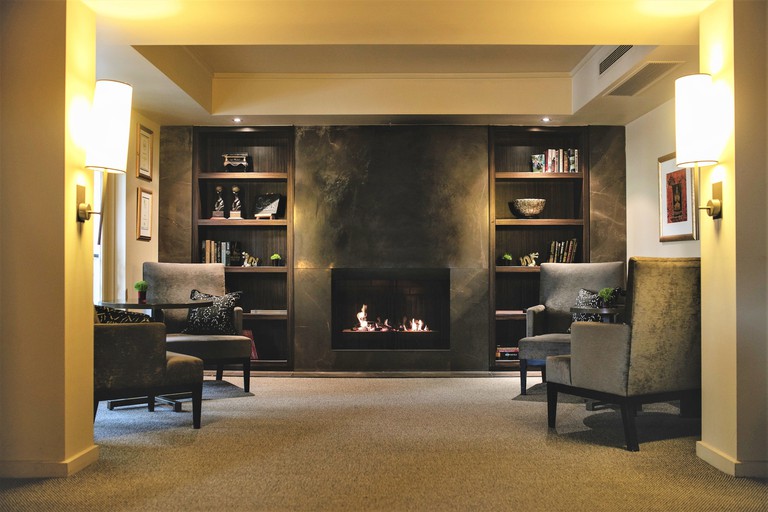 Courtesy of The Lyall Hotel and Spa / Expedia
Book Now

The Lyall became Melbourne’s first independent five-star hotel when it opened its doors in 2002, blazing a trail for the new wave of boutique properties thereafter. Despite the new company, this elegant hotel still stands out. Situated in affluent South Yarra and a 25-minute walk from the lawns of the Royal Botanic Gardens, The Lyall shows off 40 suites spread over three floors, each including a generous kitchenette and a balcony or terrace. Enjoy first-class food and drinks at the glitzy bistro and champagne bar, or head to The Lyall Spa, an urban oasis with eight serene treatment rooms. 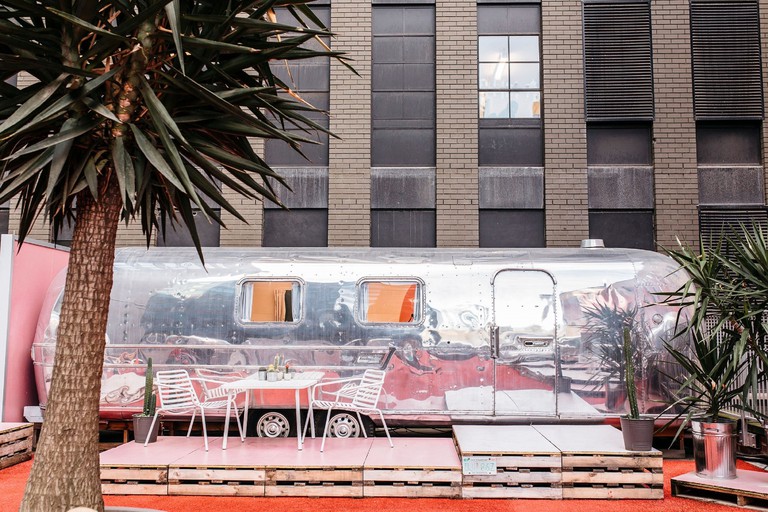 Melbourne loves a rooftop – just check out the crowds that flock to Swanston Street’s Rooftop Cinema, Easey’s rooftop train carriage in Collingwood and Fitzroy’s fabled Naked in the Sky terrace. So, it’s no surprise that this left-field venue instantly became one of Melbourne’s hottest places to stay when it opened in 2016. Located on an inner-city rooftop overlooking Flinders Lane, Notel has refitted six 1970s Airstream campers as designer accommodation. The chrome caravans are surprisingly spacious and feature a retro pink palette, comfy bathrooms, air conditioning and a complimentary minibar, while the top-end Airstream With Benefits has its own private deck, spa bath and views of the CBD’s many laneways. 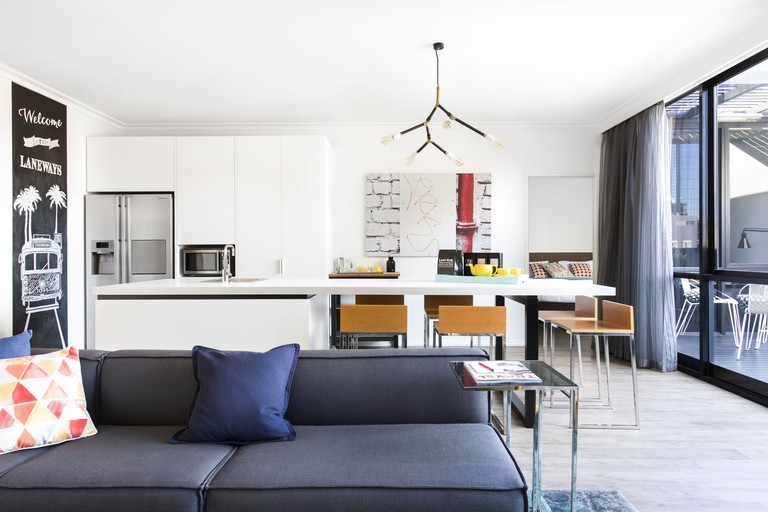 With a growing stable of cutting-edge properties springing up across Australia and Hong Kong, Ovolo’s motto is “eff the rules”. That daring attitude is on display at the brand’s only Melbourne instalment: an edgy downtown boutique next door to the Princess Theatre on Little Bourke Street. Ovolo Laneways’ characterful design is inspired by the graffiti-caked alleyways that snake throughout the city, infusing each of the 42 rooms with original artwork, bright pops of colour and slogans scribbled on the walls. Take advantage of Ovolo’s long list of freebies – goody bags on arrival, lolly bar in the lobby, complimentary minibar in every room – or book the penthouse suite to enjoy a candy buffet, in-room pinball machine and terrace hot tub. 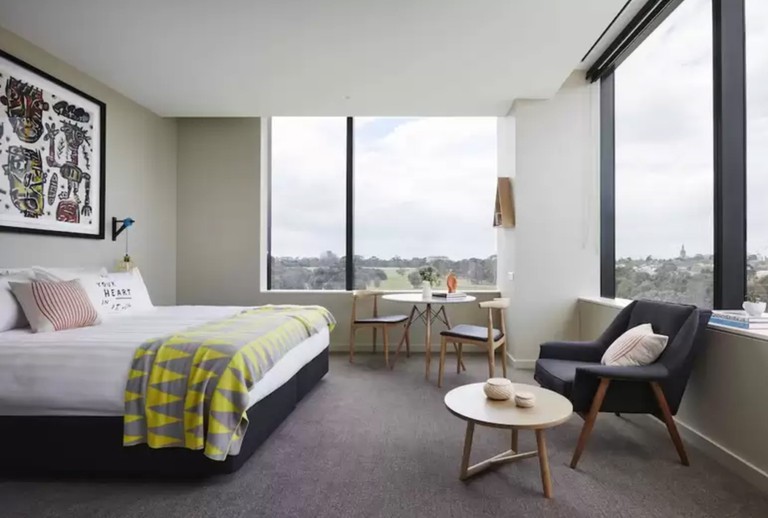 The Larwill is surprisingly affordable | Courtesy of The Larwill / Hotels.com
View Rooms

Another one of Melbourne’s Art Series hotels, this contemporary Parkville location is dedicated to larger-than-life expressionist painter and printmaker David Larwill. His bright, exuberant paintings illuminate each of the 96 four-star rooms – or workspaces as they’re known here – which also feature colourful bedding and Scandi-style furniture. Sandwiched between The Royal Children’s Hospital and Royal Park, The Larwill also offers brunch, pizza, pasta and burgers at its laid-back The Farmacy restaurant. 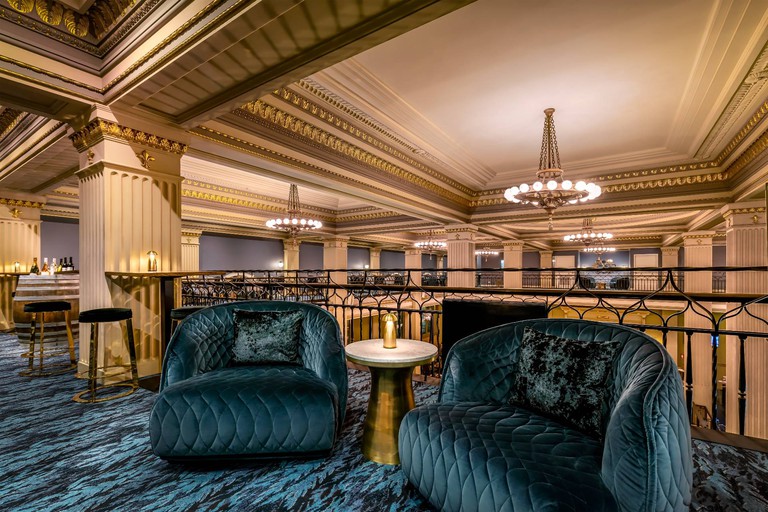 The Renaissance Revival landmark was erected on Collins Street in 1876 for the Bank of Australasia. When the tellers moved out in 1974, an elegant apartment hotel moved in. The Treasury On Collins’ traditional style has endured right down to the nine grand chandeliers, Corinthian columns and gilt-edged plasterwork in the lobby, but the 94 apartments are much more modern, with fully equipped kitchenettes and Netflix in every room. Raise a glass to the free Wine Down event every afternoon between 4pm and 6pm, when the hotel serves a selection of local wines to guests on the mezzanine bar. 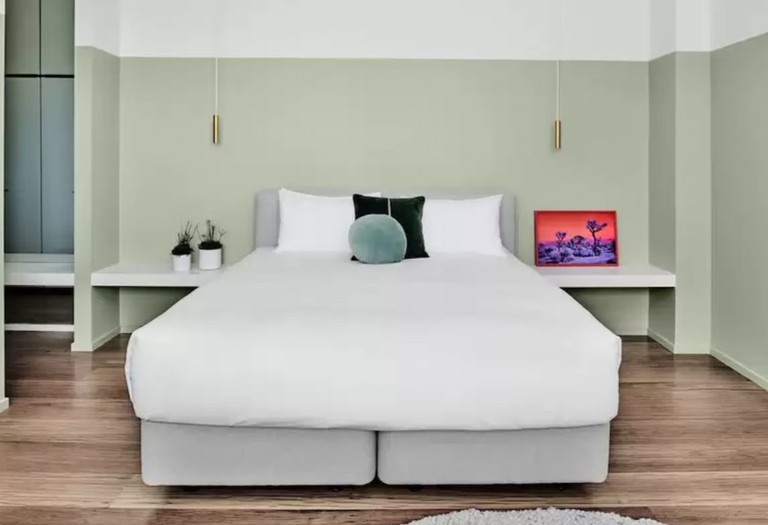 The Prince is located a block from the beach | Courtesy of The Prince / Hotels.com
View Rooms

The old-school Prince of Wales is a St Kilda institution, but head-to-toe renovations have transformed this once grungy watering hole and live-music venue into one of Melbourne’s swankiest boutique hotels. The 39 rooms’ soft pink and green hues suit the seaside locale of this art deco landmark, which sits on the corner of Fitzroy Street and Acland Street, only one block from St Kilda beach. The hotel also houses the Aurora Spa Retreat, a rooftop cocktail lounge and restaurant/private dining space. 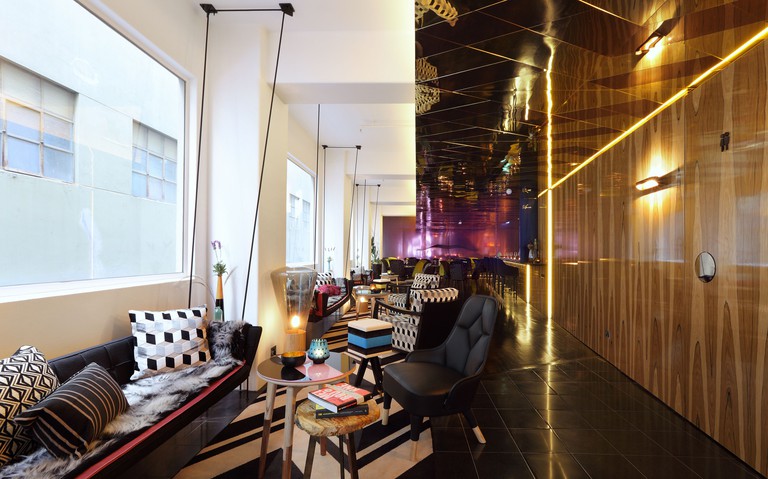 A reservation at the Adelphi is the closest that most will come to winning a golden ticket to Willy Wonka’s factory. Dubbed the world’s premier dessert hotel, this flashy Flinders Lane property has taken its design lead from a packet of liquorice allsorts, decorating a 1930s warehouse with zany sculptures, eye-catching murals and bold patterned carpets. The 34 rooms aren’t short on style, though, and nor is the glitzy cantilevered pool on the sunny rooftop terrace and the dessert-themed Om Nom restaurant, where the dishes look more like science experiments than food. 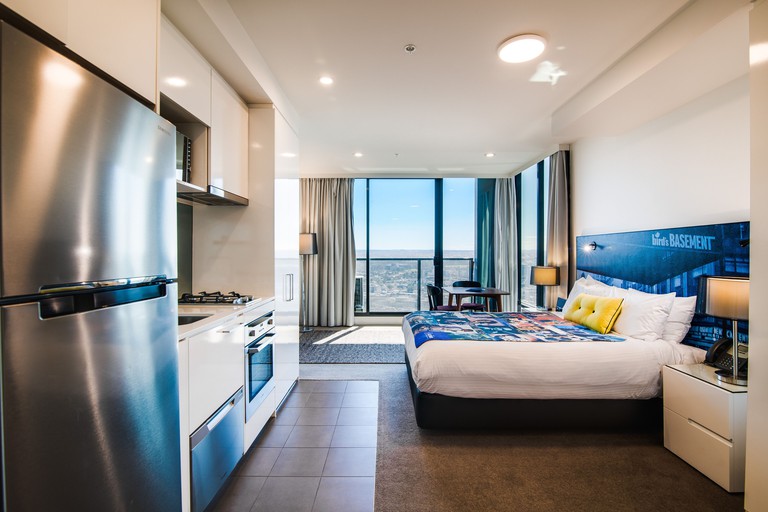 For jazz fans and music lovers, there’s only one place to stay in Melbourne: The Jazz Corner Hotel. This boutique four-star hotel offers spacious apartment-rooms right next to Flagstaff Gardens, with private balconies and cooking facilities making this the perfect place for a longer stay. The hotel is found next to the famous (and historic) Bird’s Basement jazz venue, a 200-seater venue that hosts Melbourne’s most acclaimed jazz musicians. 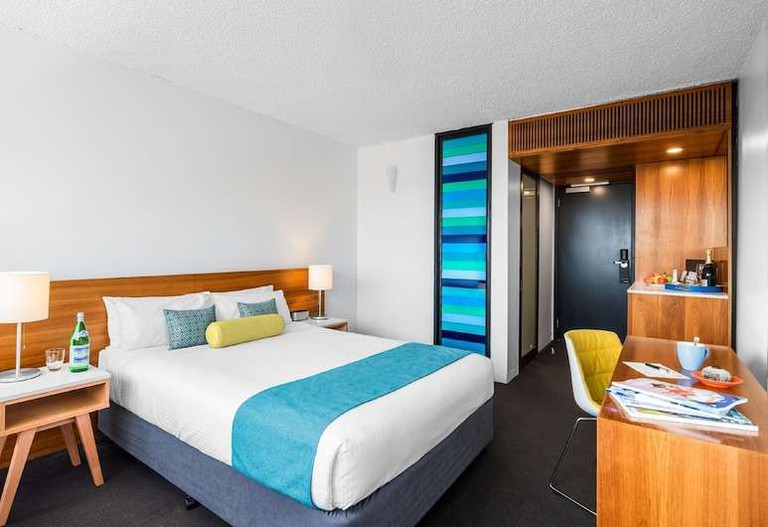 The Jasper Boutique Hotel is a two-minute stroll from the culinary heaven of Melbourne’s Queen Victoria Market, and with its central location on Elizabeth Street, you could well be in the most prime location in the city. This four-star boutique hotel in the CBD is designed with tranquillity in mind, as the rooms aim to promote a sense of calm through minimalist, modern decor. The hotel’s Jasper Kitchen promotes wellbeing too, with all the ingredients brought in fresh from the local stalls at the market. 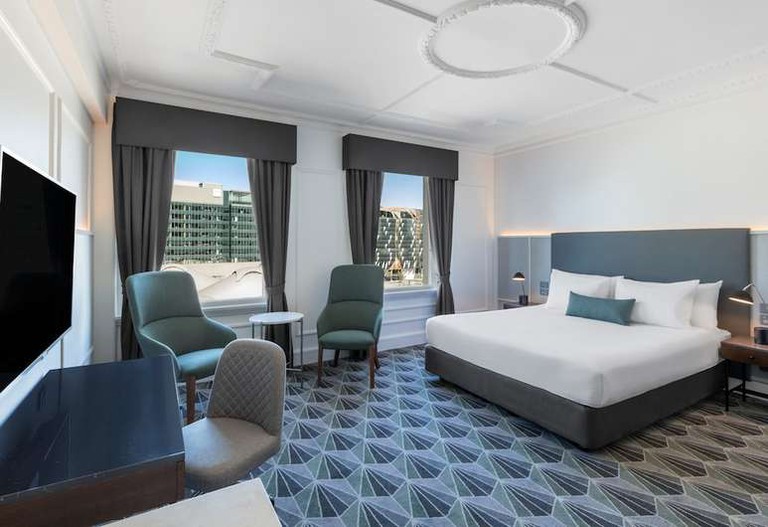 The Savoy Hotel on Little Collins is the place to stay if you’re intrigued by Melbourne’s hotel heritage. A hotel has been located on Little Collins Street in central Melbourne since 1866. The Savoy is a modern continuation of this tradition, offering 163 rooms. Don’t forget to call into the art deco Alexander Bar for a coffee or a cocktail during your stay. The bar is named after the hotel’s original incarnation as the Alexander Hotel, an establishment which had the distinction of being the first-ever Australian hotel to offer ensuite bathrooms. 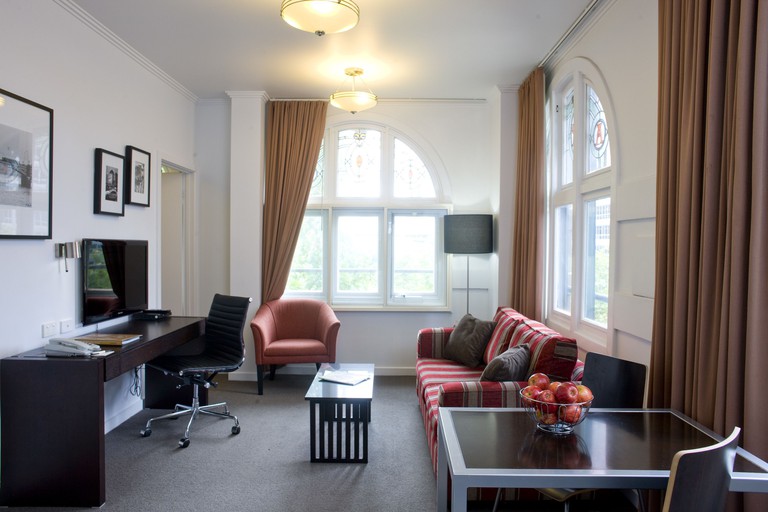 You can’t get more central than the Alto on Bourke, a four-star hotel that combines 19th-century architecture with modern service and interior design. Take a tram down busy Bourke Street, one of Melbourne’s oldest shopping streets, and alight outside the hotel before settling into one of the spacious apartments. Take breakfast in the A-Lounge Restaurant, explore the CBD by day, and finish the evening with a nightcap at the bar.

This is an updated version of a story created by Matthew Clark.