The Best Cheap Hotels to Book on Australia's Gold Coast 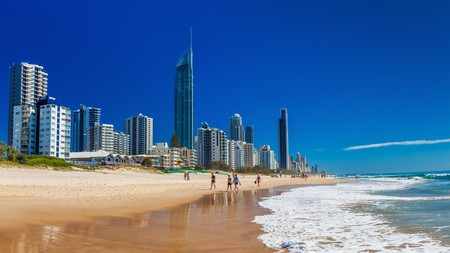 Australia’s Gold Coast might not be the first destination that comes to mind when you think of budget travel, but there are some great deals if you know where to look. Follow our budget hotel guide for find swanky steals and cheap deals on luxury resorts and stylish five-star hotels, or you can book budget-friendly motels complete with swimming pools and spa facilities. These are the best cheap hotels on Australia’s Gold Coast, bookable with Culture Trip.

Neptune Resort, for families on a budget 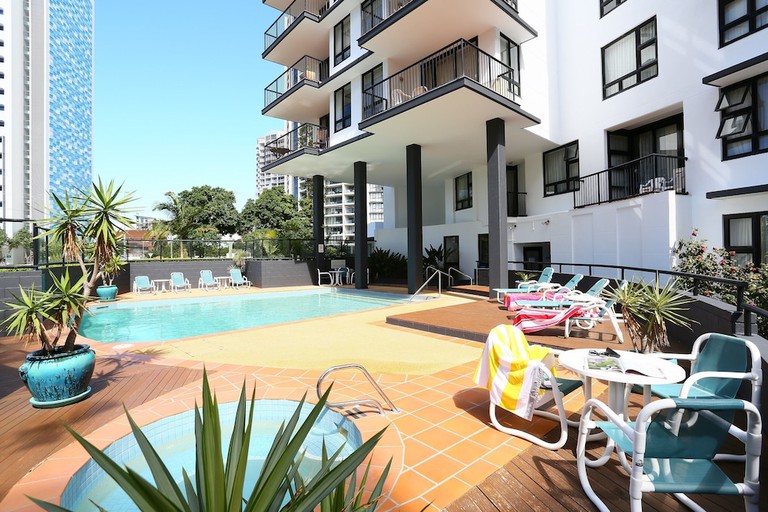 Courtesy of Neptune Resort / Expedia
View Rooms
Price Drop
Now from $128 per night
Travelling on a budget doesn’t have to be tough when you’re staying at the Neptune Resort, which offers some of the best accommodation deals on the Gold Coast for families. Situated in Broadbeach, just a few short steps from the white sands of Kurrawa Beach, the resort offers self-contained and fully equipped one- or two-bedroom apartments that are perfect for adults and kids. Take in the views from your private balcony, head down to the heated pool and spa area for some downtime, and then cook up a family feast in the outdoor BBQ and entertainment area.
More info 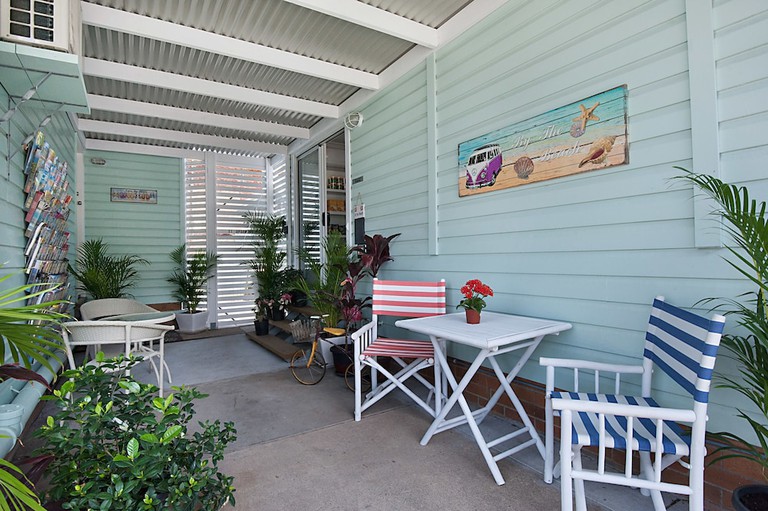 Courtesy of La Costa Motel / Expedia
View Rooms
Price Drop
Now from $113 per night
Catching an early flight out of the Gold Coast? You can’t get much closer to the airport than La Costa Motel. You’ll be happy to know that La Costa Motel is far more than just a transit hotel, because you’re less than a five-minute stroll from North Kirra Beach. This is budget, beachside accommodation at its best. As well as offering spacious studios with a microwave, fridge and coffee machine, La Costa Motel provides guests with complimentary airport transfers, free vintage bicycles to use and a hearty pre-flight breakfast.
More info 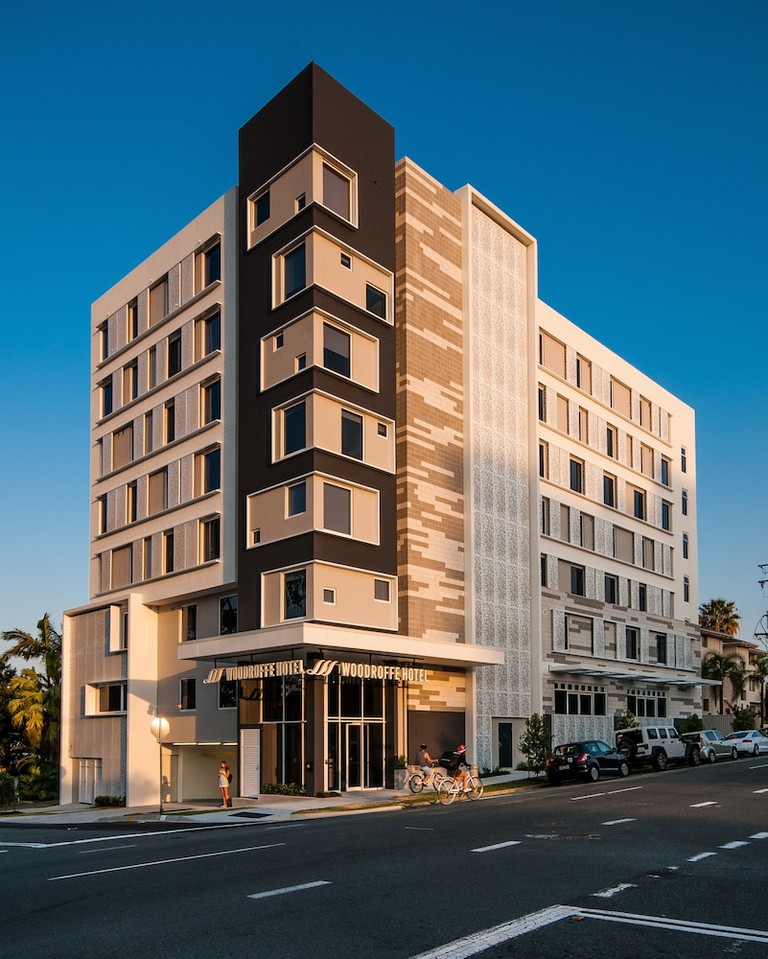 Courtesy of Woodroffe Hotel / Expedia
Check Availability
Price Drop
Now from $76 per night
Budget business travellers will quickly find that the Woodroffe Hotel ticks all the boxes for a budget-friendly corporate stay on the Gold Coast. You’ll be staying in one of the Gold Coast’s most popular business hubs, conveniently located outside Southport Light Rail Station. This is one of the newest hotels in the area, and you’ll appreciate the comfortable and modern rooms after a day of business meetings. The Woodroffe Hotel offers corporate travellers use of on-site business lounges as well as a boutique conference centre with seating for up to 35 people.
More info 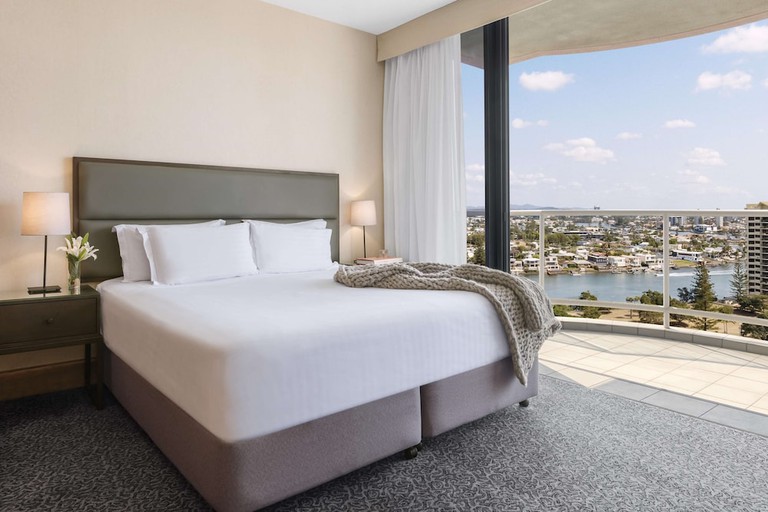 Courtesy of Oaks Gold Coast Hotel / Expedia
Check Availability
Price Drop
Now from $95 per night
If you’re on the hunt for cheap accommodation on the Gold Coast that offers all the features of a five-star resort, then look no further than the Oaks Gold Coast Hotel. You’ll have breezy views over Broadbeach from your private balcony, plus there’s a large outdoor swimming pool in the gardens, and you’ll be just a short stroll away from the Pacific Ocean. Hotel rooms are sleek and stylish, and you can upgrade to a studio apartment if you’re looking to save a few more dollars by cooking dinner.
More info

The Phoenician Resort, to unwind at a spa 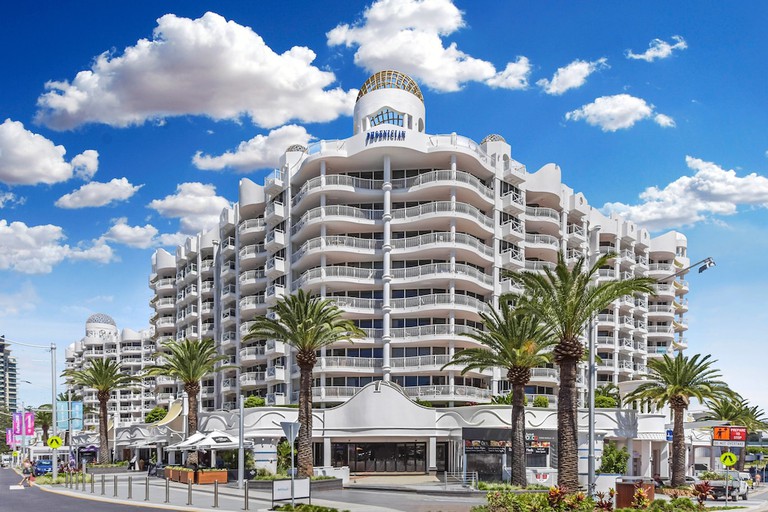 View Rooms
Price Drop
Now from $123 per night
If it’s five-star resorts on the Gold Coast you’re looking to book, then you won’t find a better deal than the Phoenician Resort. This Broadbeach classic offers luxury, self-contained apartments kitted out with fully equipped kitchens. Enjoy coastal views from your balcony, blow off some steam in the fitness centre and take a swim in the indoor or outdoor swimming pool. If you still need time to unwind, then book a session at the Phoenician Resort’s spa, where you can sweat it out in the sauna or relax in the massage parlour.
More info

South Pacific Plaza, to be near Kurrawa Beach 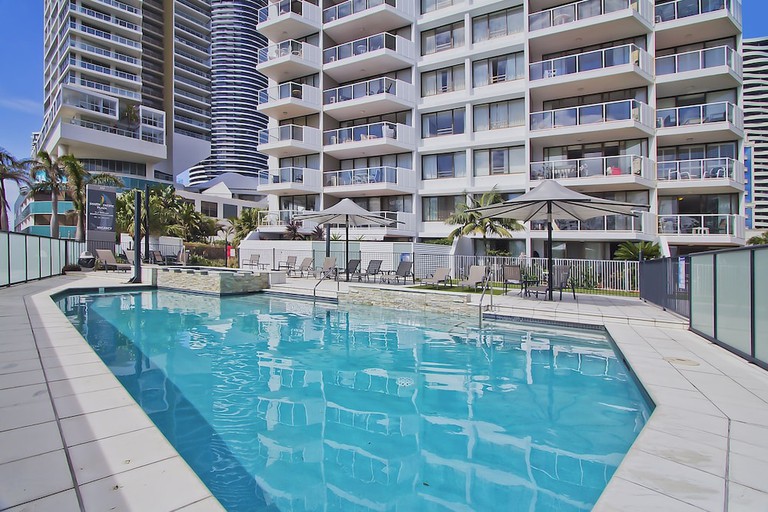 Courtesy of South Pacific Plaza / Expedia
View Rooms
Price Drop
Now from $92 per night
South Pacific Plaza rises high above the Gold Coast, in a supreme position just metres away from the white sands of Kurrawa Beach and the crashing waves of the Pacific Ocean. You’ll have panoramic views from your high-rise apartment, and if you’re on a budget, then the fully equipped kitchen is going to come in handy. You can cook up dinner on the communal barbecues, too, while you’ll also want to make the most of the heated swimming pool, sauna and tennis court during your stay at the South Pacific Plaza.
More info 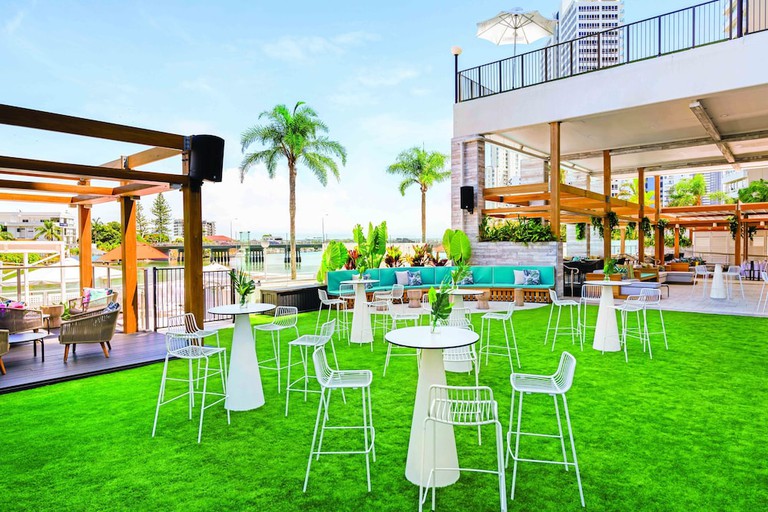 Courtesy of Vibe Hotel Gold Coast / Expedia
Check Availability
Price Drop
Now from $88 per night
From the swimming pool and sun loungers at Vibe Hotel Gold Coast, you’ll have fantastic views over the still waters of the Nerang River. You might be on a budget, but splash out on a cocktail or two at the Driftwood Social, where drinks are served poolside to your private cabana. The panoramic riverfront vistas continue from the terrace of your sleek hotel room at Vibe Hotel Gold Coast, which features minimalist yet stylish furnishings and bright, colourful decor.
More info 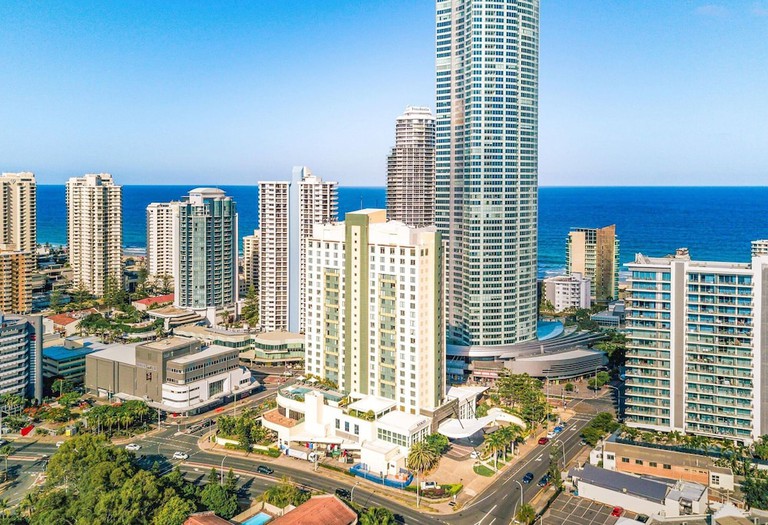 Courtesy of Voco – Gold Coast / Expedia
Check Availability
Price Drop
Now from $100 per night
If you appreciate excellent value, but are still after a splash of luxury, then the stylish Voco is one of the best places to stay on the Gold Coast. You’ll be staying in Surfers Paradise, but with two swimming pools and a spa to enjoy, don’t be surprised if you never leave the hotel. Kick start your morning at the Waves Buffet Restaurant, and end the day with a gourmet, all-you-can-eat seafood buffet that hotel guests can indulge in at especially low prices.
More info

Limassol Motel, to enjoy the laid-back Aussie lifestyle near the Coral Sea 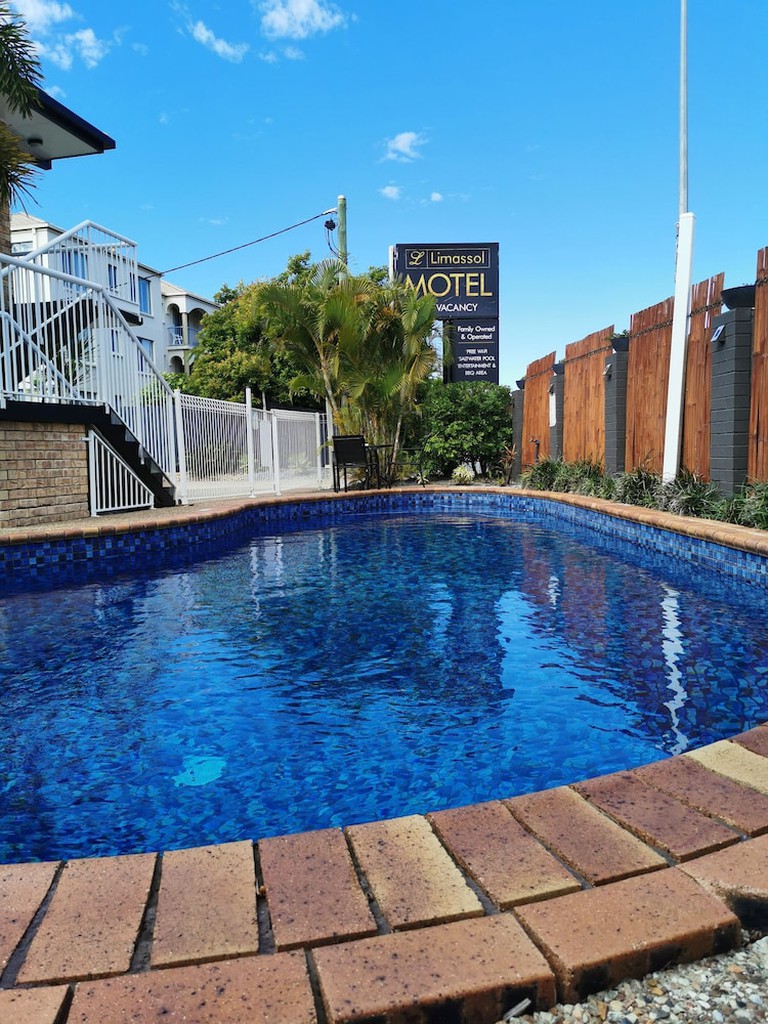 Courtesy of Limassol Motel / Expedia
View Rooms
Price Drop
Now from $91 per night
Accommodation on the Gold Coast doesn’t get much more budget-friendly than the Limassol Motel, where you’ll be impressed by the low prices and the extensive amenities. You’ll be just metres from the Coral Sea, but given the motel’s chilled-out location in the northern suburbs, you won’t have the tourist crowds to contend with. Rooms at the Limassol Motel come complete with kitchenettes and queen beds, while in the entertainment area you’ll find a communal barbecue and swimming pool where you can live out the classic outdoor Aussie lifestyle on the Gold Coast.
More info
Give us feedback