The 10 Best Cafés in the CBD, Sydney 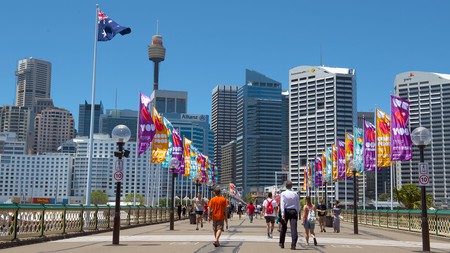 Sydney’s CBD is packed with hundreds of places where office workers can get their daily caffeine fix. These 10 cafés stand out from the pack.

The hordes of commuters streaming out of Town Hall and Wynyard train stations early on a weekday morning can look like a scene out of The Walking Dead. But while the zombies storm soulless chain stores for the caffeine hit that brings them into the land of the living, coffee aficionados make a beeline to a string of quality cafés sprinkled around the CBD. Looking for a quality cup of coffee in the city centre? Then these are the 10 best cafés in Sydney’s CBD. 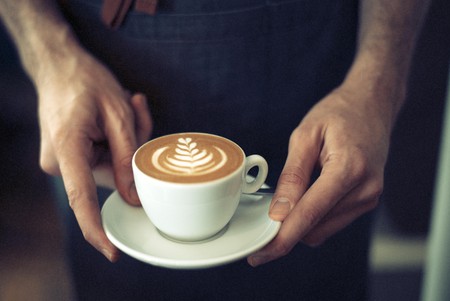 Single Origin Roasters — or Single O, as it quickly became known — began serving some of Sydney’s best coffee in Surry Hills way back in 2003, before making its move into the inner-city 12 years later. This York Street hole in the wall is positively petite, but there’s plenty on the menu — nab a spot at the five-metre standing bar to tuck into a salad, a NLT (that’s ‘next level toastie’, FYI), or a glass of on-tap kombucha, then grab a pack of Single O beans to take back to the office. 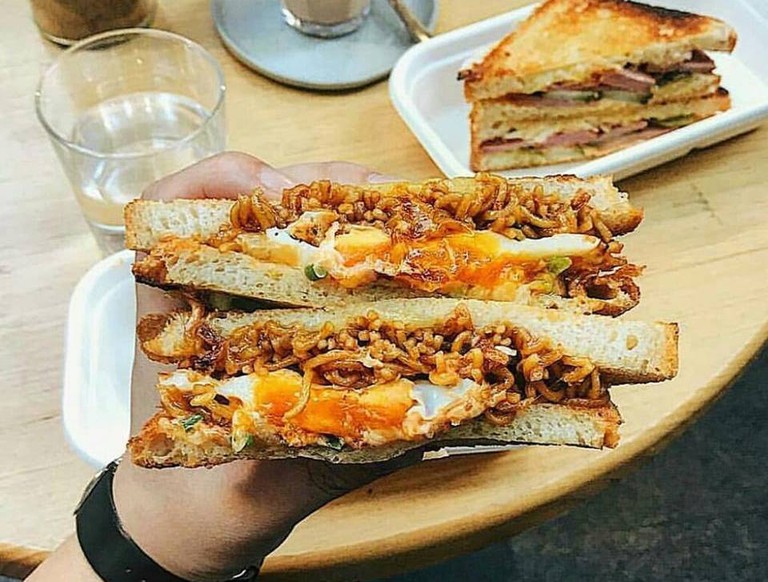 Found down the stairs of the ultra-modern EY Centre on George Street, Dutch Smuggler isn’t your average office lobby coffee shop. As well as delicious brews from Sovereign Coffee Roasters, this quirky café is home to the Mi Goreng toasted sandwich — loaded with ramen, egg, cheddar and ‘magic sauce’ — as well as stacks of other toasties like the reuben, the mushroom truffle and the Nutella-banana. 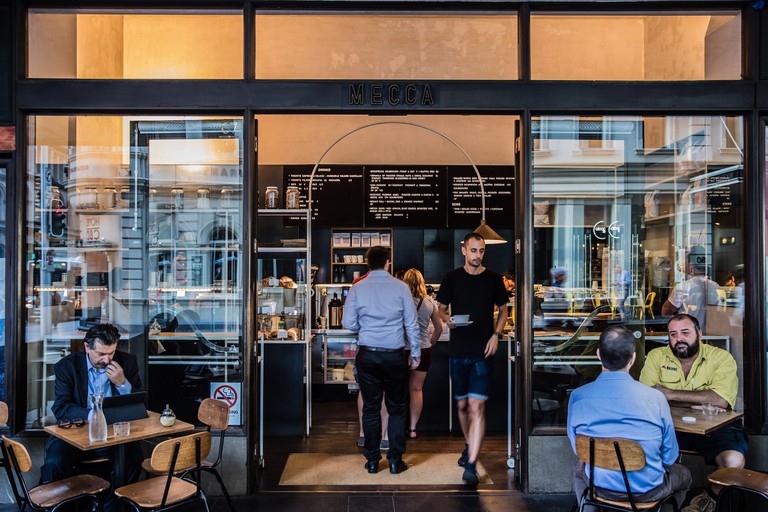 With its HQ and flagship café in industrial-chic Alexandria, Mecca enjoys a formidable reputation as one of the Harbour City’s elite coffee roasters — but it all began with this little King Street coffee shop back in 2005. A true pioneer of Sydney’s third-wave coffee scene, Mecca CBD serves some of the finest roasts you can find anywhere in the country, while budding baristas can also buy all the kit they need to get their specialty coffee fix at home.

Filling the ground floor of the heritage-listed Red Cross House with chic Scandinavian design, this spacious Clarence Street café is one of the CBD’s most creative coffee joints. Examine the chalkboard menu for a meal that tickles your fancy — seasonal offerings include miso pumpkin with salad, Bannockburn chicken thigh with an avocado cream or a comprehensive all-day breakfast menu — and wash it down with a carefully selected specialty coffee.

Skittle Lane for a seriously sleek and stylish space

Taking its name from the nearby alleyway that local ne’er-do-wells used for bowling back in the day, Skittle Lane is now one of Sydney’s most sophisticated purveyors of caffeine. This sleek space has some serious style, right down to the handmade ceramics your brew will be served in, and boasts the quality of coffee to match thanks to their own Skittle Lane roast as well as guest appearances by Australia’s premier roasters.

Gumption by Coffee Alchemy for no frills coffee 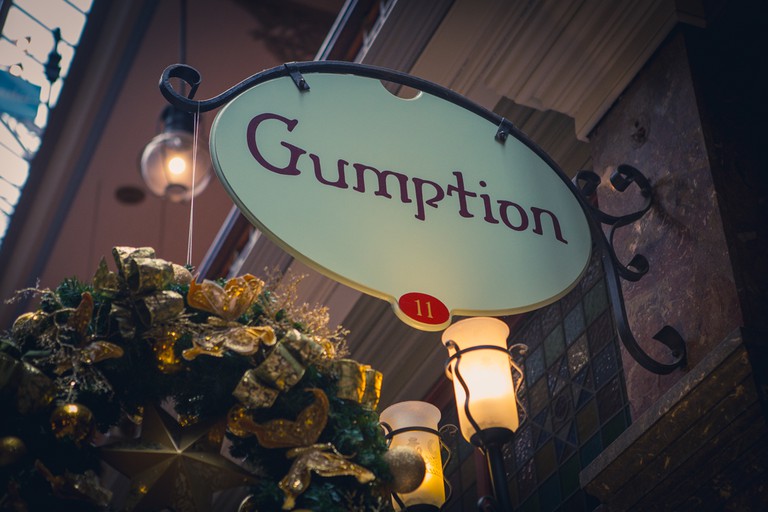 CBD locations don’t get much swankier than the 19th-century Strand Arcade, and the quality of Gumption’s coffee suits the salubrious space. Sitting on the ground floor of the Strand, this pint-sized espresso bar brews beans by acclaimed Marrickville roaster and sister café Coffee Alchemy — and with no food on the menu whatsoever, there’s nothing to distract from the calibre of the coffee.

Regiment CBD for frothy flat whites made with Übermilk

You can’t miss this very contemporary coffee shop sandwiched between Wynyard Station and Martin Place, unless your eyesight is impervious to beams of golden light. Regiment CBD’s gold theme flows all the way from the two gleaming Synesso Hydra espresso machines to the shiny jugs receiving pre-steamed milk from Sydney’s only pair of high-tech Übermilk machines, while the gold-standard Five Senses roasts live up to the lavish surrounds. 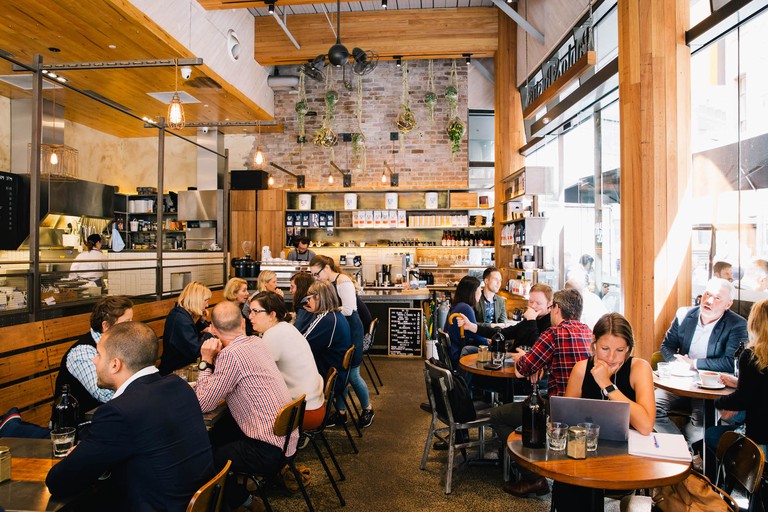 Pablo & Rusty’s is a great spot for coffee in Sydney | © Courtesy of Pablo Rusty
Starting as a small roastery on Sydney’s leafy North Shore in 2003, Pablo & Rusty’s has blossomed into one of the country’s best-known coffee brands — and this spacious café in the heart of the CBD is the smiling face of the operation. Named after founder Saxon Wright’s coffee-obsessed brothers-in-law, this airy Castlereagh Street institution is always brimming with office workers stretching their coffee break a little longer for another single-origin espresso or a nibble of the Mochi pikelets with pumpkin pie filling or beer-and-mushroom ragout on toast.
Open In Google Maps
161 Castlereagh Street, Sydney, New South Wales, 2000, Australia
Visit Website
Give us feedback

The Grounds of the City for coffees and cocktails til late

It mightn’t have the same whimsical magic of the pavilions, animal farms and converted factories that make up the Instagram-famous Grounds of Alexandria, but the Grounds of the City still dishes up the same delicious brunch as its parent property. Sitting inside the glamorous Galeries shopping mall, this swanky all-day establishment plates up all your brekkie favourites before 11.30am and stays open for a cheeky knock-off cocktail after work.

Normcore lives by a simple mantra: damn good coffee only. The brainchild of award-winning baristas Nate Lee and Chanho Hong, this Castlereagh Street roaster offers a ‘hardcore’ single-origin black coffee line-up as well as a more ‘normal’ blend perfect for a milky cuppa. The boutique café complements its roasts with brunch classics like avo on sourdough, seasonal granola and four gourmet toasties.