The Best Boutique Hotels in Melbourne 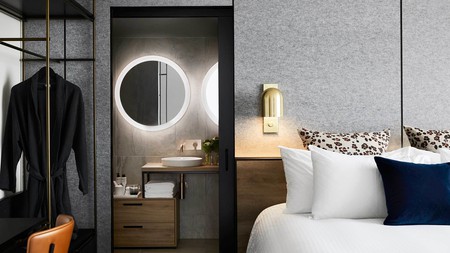 As Australia’s capital of culture, Melbourne blends cutting-edge cafes and world-class restaurants with historic landmarks, such as the National Gallery of Victoria. From Lygon Street to St Kilda Road, book one of the best boutique hotels in Melbourne.

No city in Australia can compete with the stylish swagger of the Victorian capital – just ask a fiercely proud Melburnian to confirm that. It’s no surprise that Melbourne has the most vibrant assortment of boutique hotels in the country. Cantilevered pools, rooftop camper vans and priceless artworks form only a few of these properties, which are every bit as bohemian as the city itself. On the hunt for a unique place to stay? Melbourne has a boutique hotel for you. 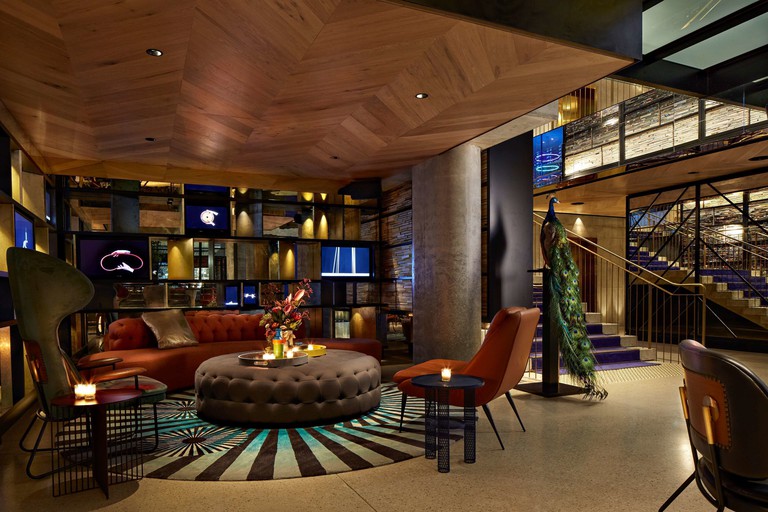 A favourite among Melburnians, who flock to its buzzy rooftop bar after dark, QT Melbourne is an excellent option for those wanting to immerse themselves in the Victorian capital. The hotel is housed in a former cinema, but its past self is barely recognisable, thanks to its array of hanging neon lights, vibrant artworks and walls of books. Opt for the corner room if you can, a deep soak tub is placed window-side so you can gaze at the city while you bathe. 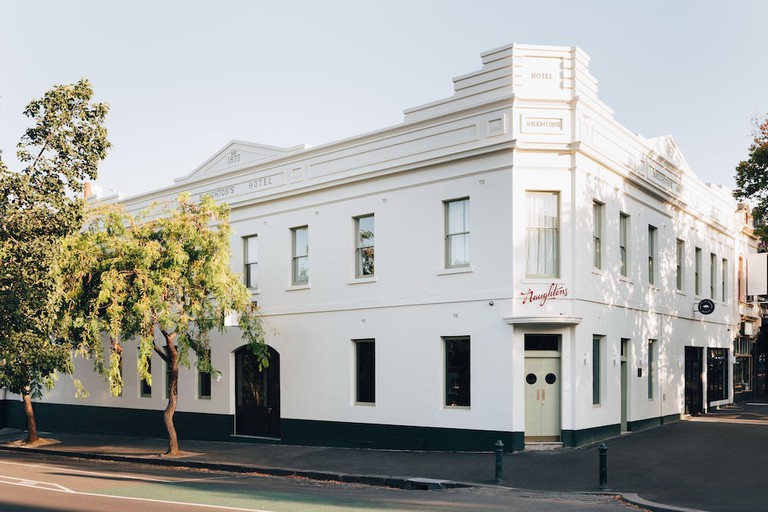 In the heart of leafy Parkville, this ultra-luxe pub with rooms sits in a restored 150-year-old building. When you’re not admiring its forest green-hued interiors, the seasonal, locally sourced and nose-to-tail dining ethos is the obvious draw here – the wood-fired broccoli steak and beer-battered blue grenadier is best chased down with a pint of craft beer. Upstairs, the light-filled rooms will appeal to minimalists with their shuttered windows and Leif amenities. 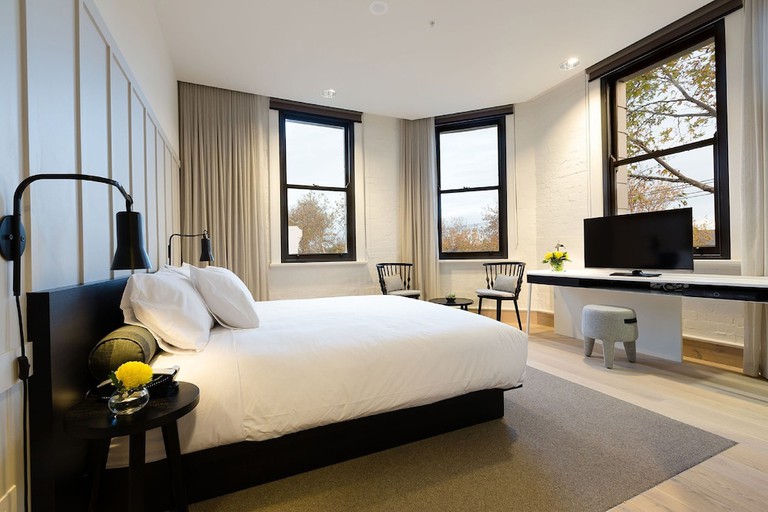 As its name suggests, the Coppersmith Hotel has a thing for copper – its bar has copper taps and rooms have copper accents. This, combined with its timber floors, steel pylons and arched windows makes for an extremely aesthetically pleasing stay. Rooms are sizable, but you’ll probably spend more time in the bar, sipping on Australian wine and beer; and in the restaurant, where you can order crispy pork belly or chargrilled octopus, if you like. 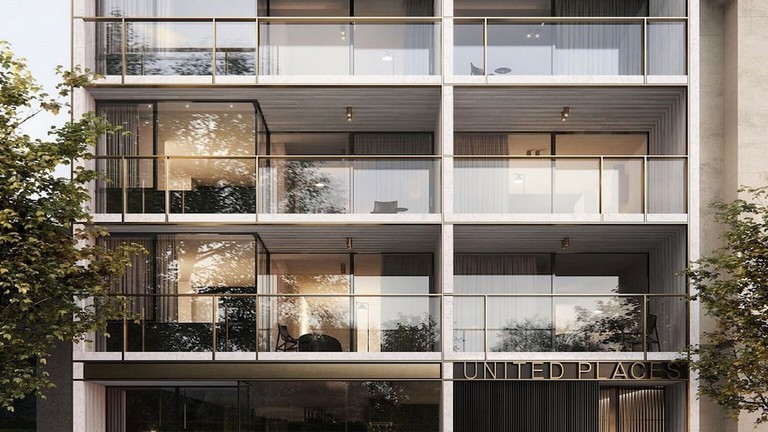 Occupying an ultra-modern glass building, United Places Botanic Gardens’ 12 rooms radiate inner-city cool, with oak floors, polished concrete and luxe-leather furniture. Generous balconies make the most of the leafy surrounds, with views of the Royal Botanic Gardens in swanky South Yarra. The property also prides itself on collaborating with local artisans, with bespoke Szilvassy ceramics filling the kitchenette cupboards and whisky by Sullivans Cove Distillery populating the minibar. You’ll also receive a complimentary breakfast delivered to your room from the wood-fired ovens of Matilda 159 downstairs. 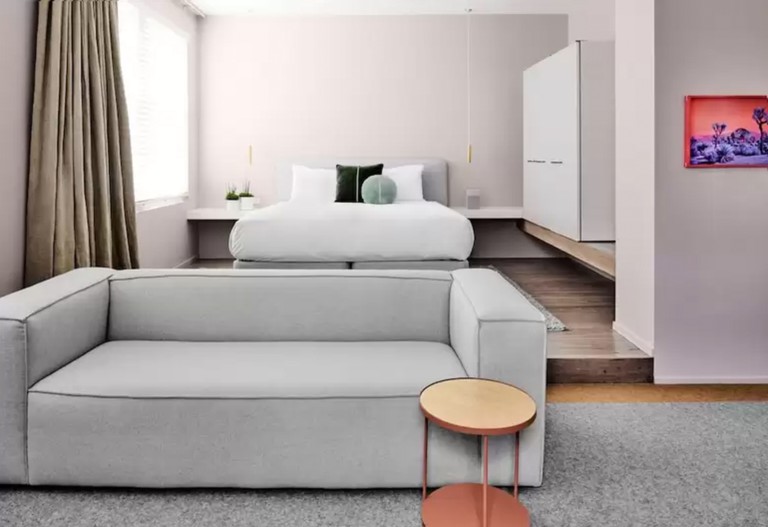 More than 15,000km (9,321mi) separate the sands of Miami and the shores of St Kilda, but the soft pastel hues of this art deco hotel could have been lifted straight out of South Beach. The four-storey Prince Hotel has towered over Acland Street since 1936 and became a trendy boutique accommodation in the new millennium. Today, the building features green- and pink-hued rooms brimming with plush furniture, pendant lighting and white marble. The property’s spirit lives on in the Public Bar and live-music venue downstairs, while the bistro and spa are very contemporary additions. 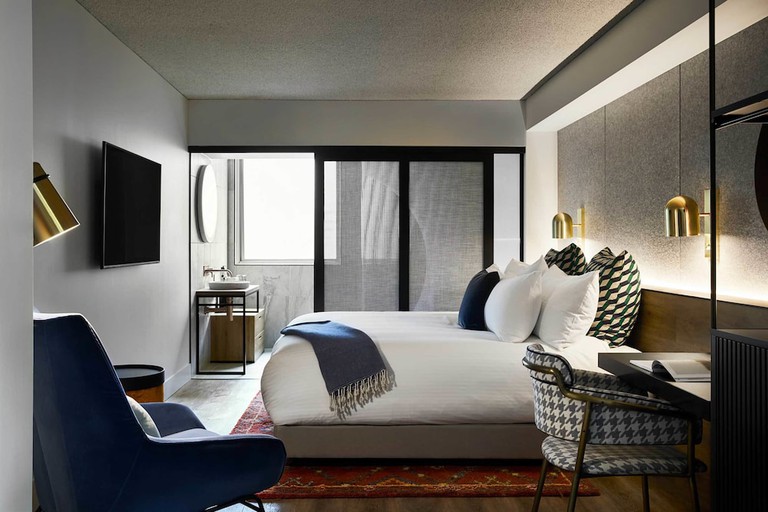 The Zagame family has dominated Melbourne’s hospitality game for more than half a century. Hotelier brothers Victor and Robert Zagame pumped 18 million Australian dollars (£10 million) to turn an old motel into Zagame’s House, an arty 97-room hotel with a dramatic black exterior and bespoke local artworks and furnishings. Lygon Street’s array of Italian restaurants are on its doorstep and the picturesque Carlton Gardens a short stroll east. Stop by the hotel’s Lord Lygon wine bar for a charcuterie platter to share, while 1851 Coffee Kitchen serves a scrumptious seasonal breakfast. 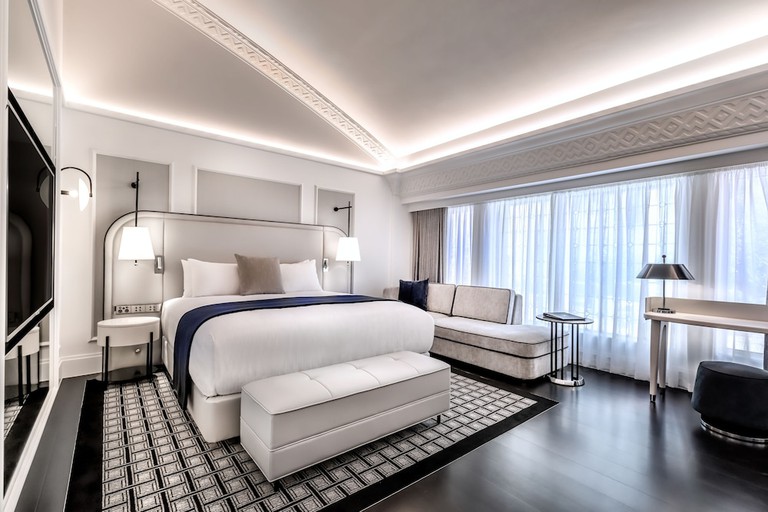 The Royce Hotel is an elegant five-star hotel, occupying a heritage-listed building that sold Rolls-Royce cars during the 1920s. This art deco hotel sparkles with historical grandeur – from the grand staircase and glitzy chandelier in the lobby to the Italian marble bathrooms in each of the 100 light-drenched rooms. It sits on St Kilda Road, close to the high-end shopping destinations of Toorak Road and Chapel Street. Foodies should make a beeline for The Amberoom, which serves lunch, dinner and cocktails, plus the award-winning Dish for breakfast – both of which are currently undergoing refurbishment. 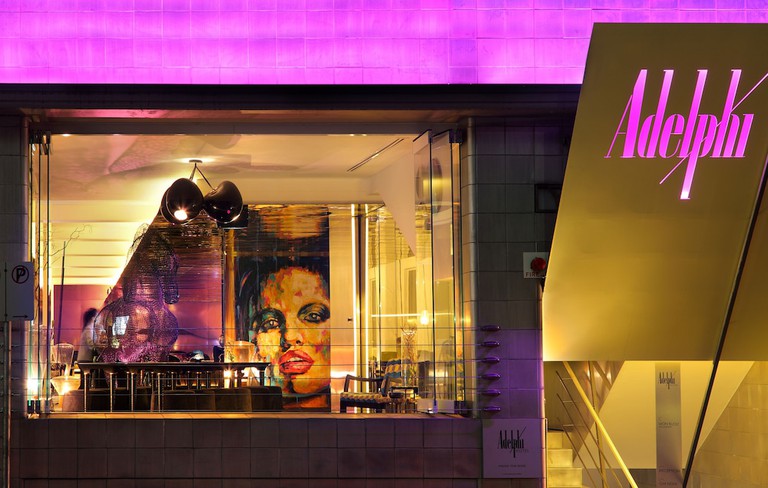 From the ground-floor reception desk – itself a sculpture of a horse and carriage – to the cantilevered rooftop pool peering over Flinders Lane below, the Adelphi Hotel is not short on unique design features. This old rag-trade building near Flinders Street Station was converted into a boutique hotel in the late 1980s and then Wonka-fied in 2013 – becoming the world’s premier dessert-themed hotel. The 34 rooms feature black-and-white zigzag carpets, stools shaped like Liquorice Allsorts and custom-made marshmallow beds (non-edible, unfortunately). However, sweet treats are available at Om Nom Kitchen in the lobby. 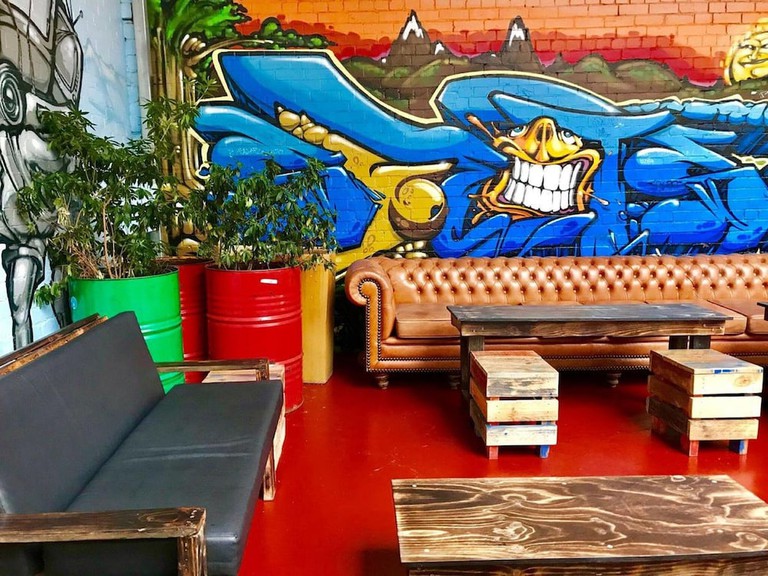 Once a sticky-floored music venue that hosted the likes of Jet, Regurgitator and The Temper Trap on their way to the top, the grungy East Brunswick Hotel became an upmarket pub before new owners added boutique accommodation. Located in the heart of Melbourne’s hipster haven at the north end of Lygon Street, this historic building dates back to 1888. While the front bar features exposed brick, steel beams and recycled timber with modern pub grub coming out of the kitchen, the 12 rooms are a more intimate affair, with velvet lounges, ornate chandeliers and a moody colour scheme. 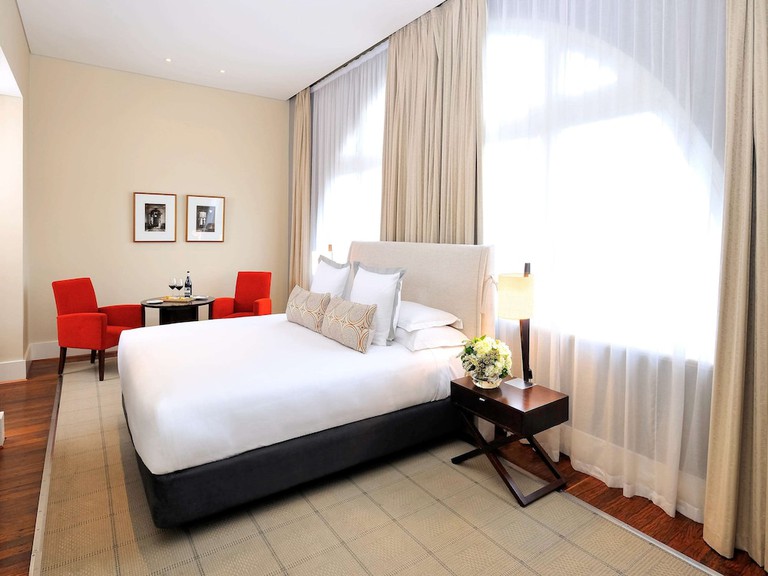 This Flinders Street landmark is now in its fourth incarnation, beginning life as a tea warehouse for the Griffiths Brothers in the early 1900s, then a newspaper HQ in the 1960s and a pool hall in the 1970s. Hotel Lindrum breathed more life into this red-brick Romanesque Revival monument, retaining the name (and plenty of memorabilia) from the centre of the old billiard while adding 59 luxurious guest rooms. The mellow wooden and velvet decor echoes the building’s past, but the forward-thinking fare at the on-site Felt restaurant and cocktails in the Back Bar & Billiard Room are thoroughly modern touches. 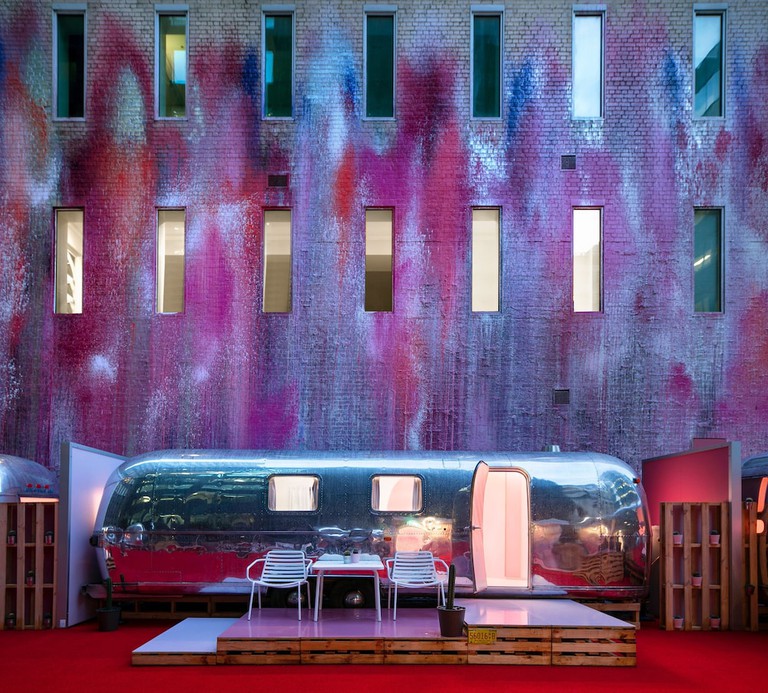 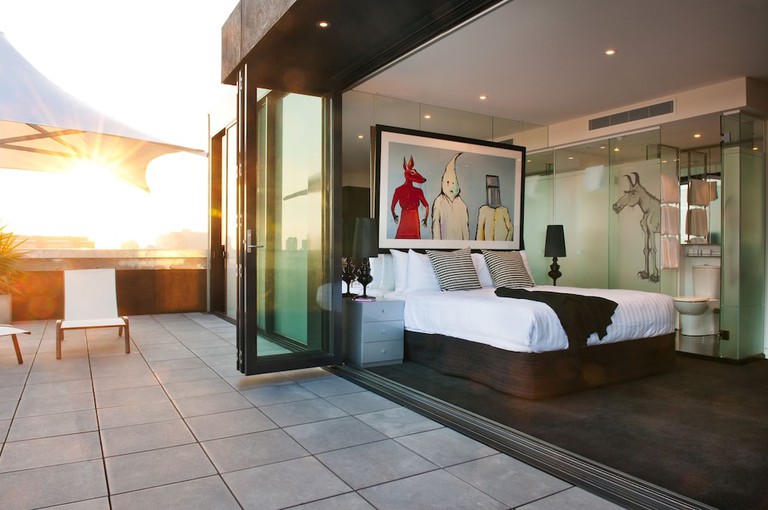 The Cullen is part of the Art Series Hotel Group and pays homage to Adam Cullen, whose irreverently humorous paintings of cowboys, kangaroos and Ned Kelly made him one of Australia’s most controversial (and collectable) modern artists. The property’s 118 open-plan rooms are furnished with Cullen’s creations, as well as bespoke Art Series Signature beds and in-room kitchenettes. The hotel also has a hair salon, a state-of-the-art gym and two restaurants overlooking the bustling Prahran Market. 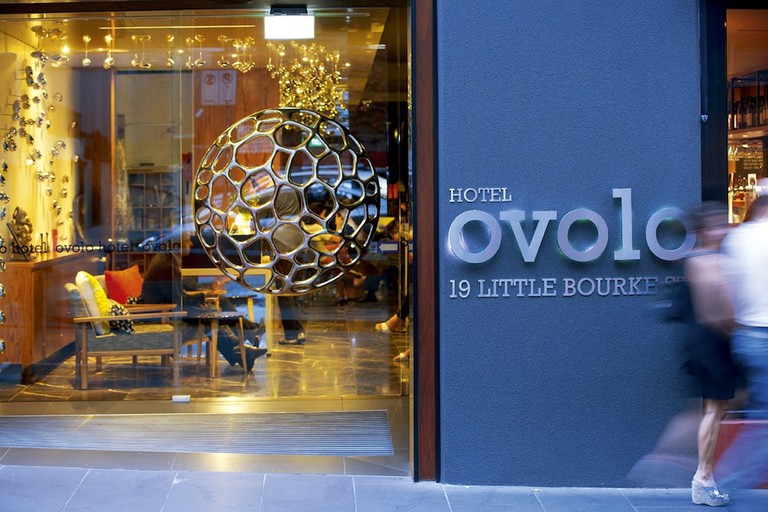 Ovolo Laneways is all about the free stuff – free “grab-and-go” breakfast, free goody bags upon check-in, free all-day snacks, free imported beer in the minibar, free Apple TV and satellite channels, free self-service laundry and free drinks during the lobby bar’s happy hour. Hidden on Little Bourke Street around the corner from the Princess Theatre and Victoria’s Parliament House, these 42 rooms take their design lead from Melbourne’s laneways, with street art and slogans splashed across the walls. Big spenders can treat themselves to the penthouse suite, complete with a lolly buffet, pinball machine and outdoor Jacuzzi.