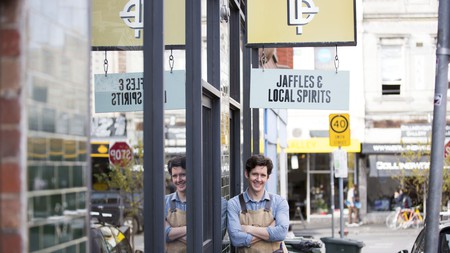 Like most people who call Fitzroy home, Seb Costello didn’t grow up in the 3065 postcode. But when the Canberra native unearthed a passion for craft spirits after mixing cocktails and sipping from stills across the UK, USA and Mexico, there was only one place he could open a bar once he returned to Australia – this hub of hipsterdom in Melbourne’s bohemian inner north.

“You very rarely meet someone actually from Fitzroy,” Costello tells Culture Trip from Bad Frankie, his ubercool cocktail joint just off Smith Street. “It seems like everyone goes from all over Canberra, all over Sydney, all over Brisbane and they move to Fitzroy, just to get that vibe and that experience. People want to come here – they want to get a bit of that grit and a bit of that excitement.”

Once a working-class neighbourhood crowded with factories, the University of Melbourne’s students next door in Carlton – plus the cheap rents, of course – made Fitzroy fertile soil for a wave of revolutionary watering holes some 20 years ago. Seminal cocktail bars Black Pearl and Ginger – the latter founded by Sam Ross, who went on to open New York’s revered Attaboy – joined a crop of rough-and-tumble pubs to form the after-dark ecosystem that lights up the neighbourhood today.

“We have heaps of pubs, we have a fair bit of grit, a bit of crime, rolled into ‘Let’s open a cool venue’,” Costello says. “It was ripe for the picking to be a cool venue, a cool place, because there’s so much realness. And because there was that ‘do what you feel’ environment, that’s why a few good bars happened.” The following are Seb’s pick of the bunch, starting with his own. 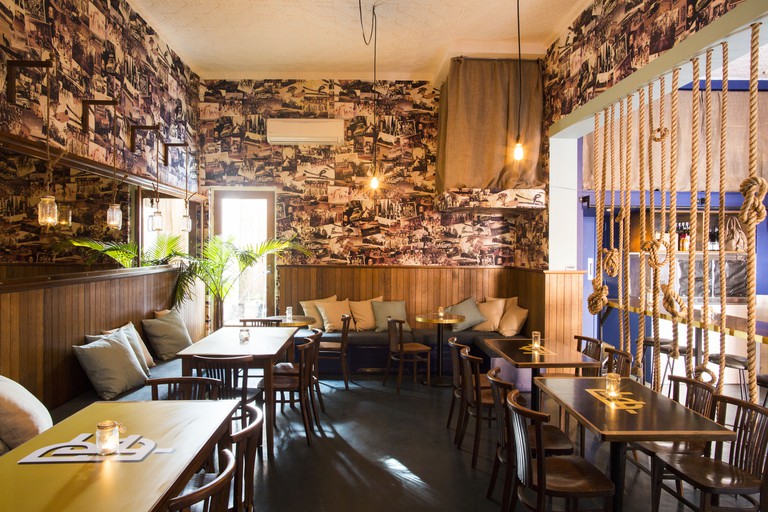 Seb Costello remembers scarfing down sloppy joes and Tennessee beers in Nashville, swilling tequila in the Mexican region of the same name, sipping straight from the still at Scottish distilleries and nursing warm pints in centuries-old pubs in the north of England. These travels are the origin of his dedication to local Australian spirits. A range of gourmet sandwich toasters accompanies a dizzying collection of 150 bottles of craft gin, whisky, rum, brandy and vodka — and Costello can rattle off not only the names of the labels, but the names of the distillers, telling the stories of Four Pillars’ Cam Mackenzie, Starward’s David Vitale and Black Gate’s Brian and Genise Hollingworth to name but a few. “That’s why we started Bad Frankie, because we wanted to serve just Australian stuff that people might not have heard of, so I could repay that favour that people in Tequila, people in Cognac, people in Kentucky did for me,” Costello explains. “That, to me, is what drinking’s all about. With this educated drinking culture that we’ve got now, everyone wants to know where something’s from and drink something local – and that’s what we’ve done.” 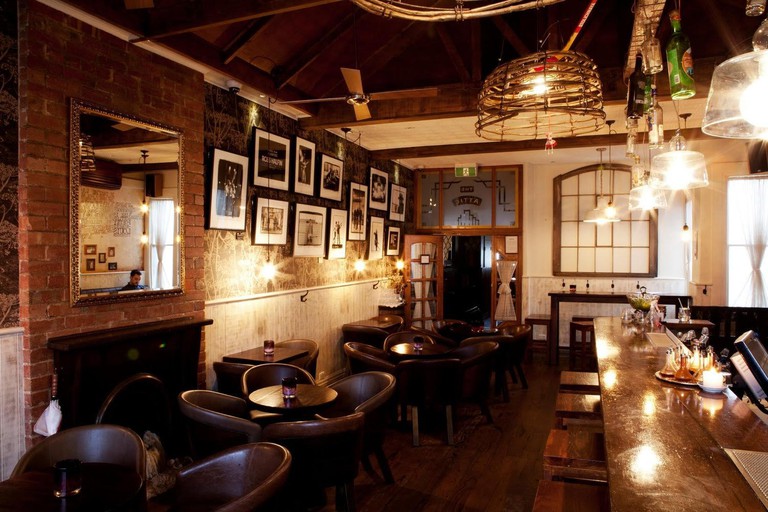 When it opened in 2002 – a different age, in hospitality terms – the Black Pearl was a cocktail-mixing trailblazer. And despite the years under its belt, the Black Pearl’s cocktail list is constantly evolving, making it as much of a stalwart on the respected World’s Best Bars list as it has become on Brunswick Street. Tash Conte’s family-run bar offers innovative cocktails, food until late – including its famous sausage roll – plus upstairs bar The Attic. “It wins a whole heap of awards the whole time because it’s fun, it’s so fun,” Costello says. “They make great cocktails – every time you go in there, you walk out six drinks later with a big smile on your face.”

Taking its name from the code words Fitzroy locals whispered to get their hands on the moonshine Russian emigrant Leon Satanovich made in this old warehouse during the Depression, Naked for Satan – and its rooftop bar Naked in the Sky – carries on the Moran & Cato building’s fine tradition of homemade hooch. There are million-dollar views down Brunswick Street towards Melbourne’s skyscraping CBD, but Melburnians would flock here even without them, thanks to Naked’s long list of seasonal infused vodkas, house-brewed beers and modern Australian food coming out of the kitchen. “Being only two kilometres from the city centre, it commands a spectacular vista of the city skyline,” says owner Max Fink. “The panorama from Naked in the Sky’s open rooftop deck and bar area is dazzling.” 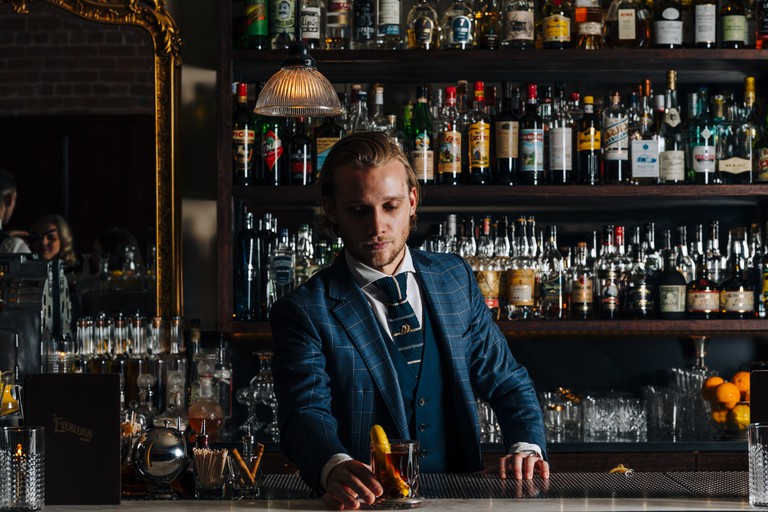 The Everleigh’s chesterfield lounges, crystal chandeliers and intimate lighting transport cocktail aficionados back to the golden age of the 1920s, as do the tried-and-tested classics on the menu — fixes, fizzes, sours and the like. For this romantic and upscale option on Gertrude Street, the Everleigh’s owner Michael Madrusan has imported the lofty standards he crafted working at New York bars Milk & Honey, Little Branch and PDT. “Sensational speakeasy, 1920s vibe, fantastic, beautiful, classic drinks,” Costello says. “You can go there if you want to be a bit fancier. You’ll listen to jazz and smash a whole bunch of beautifully made Manhattans.”

“Fuck this, I’m going to Kent Street.” The tag line tells you everything you need to know about the attitude of this old-school boozer, which is like a microcosm of the neighbourhood itself. Feeding off the Fitzroy vibe of its Smith Street location, Kent Street occupies a well-worn building where the comfy vintage furniture, with its blaring live music and nostalgic ’80s knick-knacks, feels more like a house party than a licensed establishment. “Everyone’s welcome, and it’s just the business,” Costello says. “You sit there, you have a pint, you’re probably looking around going, ‘What the hell am I doing here?’, but after that pint you’re like, ‘This is where I need to be.’ Just excellent. A classic Australian dive bar.” 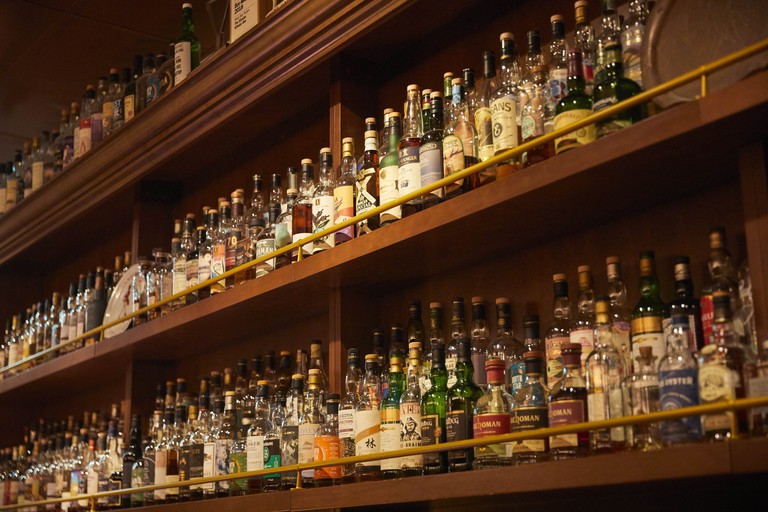 The Elysian will transport you to Tokyo | Courtesy of The Elysian

Yao Wong and Kelvin Low are serious about whisky, and the pair have curated an epic collection of 350 rare bottles scoured from every corner of the planet, including loads of one-off single-barrel releases and items from independent distilleries. The Elysian adds a little slice of Tokyo to the lower end of Brunswick Street, with cosy leather seating, soft jazz and a long Californian redwood bar inspired by Japanese bar culture. There’s even a small menu of fruit cocktails, wine and beer for non-whisky drinkers, plus a bar-food menu by Japanese chef Ryo Kitahara. “Kelvin and Yao are just awesome whisky nerds who know everything about whisky,” says Costello, who knows how to sniff out quality spirits himself. “They’ve got boutique and excellent whiskies, so that’s supercool.”

This historic building has towered over the corner of Napier and Moor streets since 1866, and represents a time capsule of the Fitzroy of old. With memorabilia of the late, great Fitzroy Football Club decorating the bar, the Napier is the quintessential Australia pub, with a broad choice of craft beer on tap alongside the standard domestic drops, plus a generous pub food menu scribbled on a chalkboard, including the classic chicken parmigiana topped with smoked kangaroo. “Fitzroy is really good for an Aussie pub,” says Costello. “They’re super-important and super-amazing. You just sit at the bar if you don’t know anyone and just smash beers and have a chat to everyone, and soon enough, you’ll become mates.”

Seb Costello offers a simple assessment of Bar Liberty: “It’s one of the best wine bars in the world, definitely in Australia. They’ve got beautiful food, excellent wine knowledge and absolute belting service. Just a belter.” A bright, airy, Scandi-style space that feels more like a café than a nightspot, this Johnston Street venue handpicks a formidable wine list served with an ever-changing menu of bar snacks and modern mains. And it’s not just wine – Bar Liberty’s discerning eye extends to beer, cider, sake, spirits and non-alcoholic drinks from some of Australia’s best vignerons, brewers, distillers and roasters. 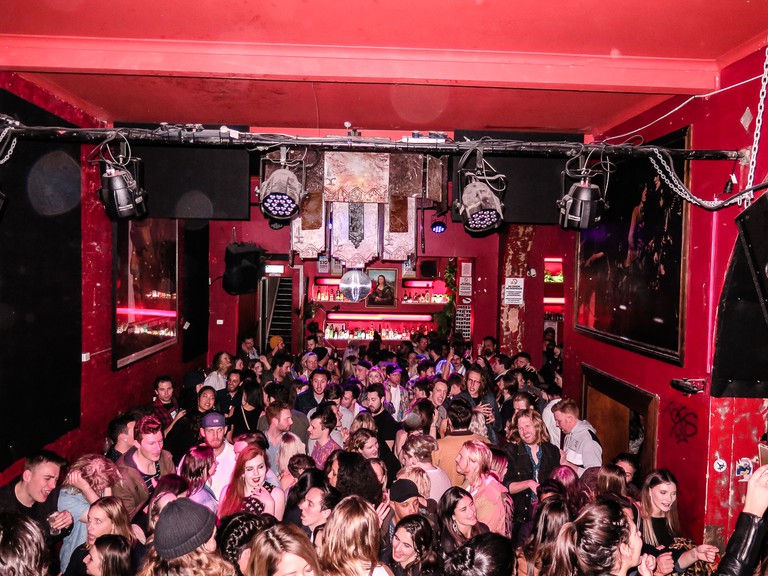 Fitzroy isn’t home to any nightclubs per se, but late-night revellers are lured to the red glow of Yah Yah’s like moths to a flame. An unpretentious bar billing itself as ‘a weekend club for zombies’ that will #DisgustYourParents, this Little Smith Street watering hole stays open late with its ‘Thursgay’ queer event every Thursday, the indie music Versus Party every Friday and Melbourne’s top DJs for Bad Habits every Saturday, plus loads of local live-music acts. “You just go there and all of a sudden you’re shit-faced and you’re having the time of your life,” Costello says. “It’s hilarious. It’s like that place that everyone pretends they never go to, but goes to all the time.”

This Johnston Street building housed a dairy, a haberdashery shop and a restaurant before becoming the Old Bar in 2001 – a sticky-carpeted champion of Melbourne’s under-siege live-music scene. The Old Bar puts on live rock, punk and hardcore seven nights a week, often hosting residencies for up-and-coming artists on stage and in the art gallery upstairs to support Fitzroy’s local creatives. And the music memorabilia plastering the walls supplies a suitable backdrop for a gig and a pint of craft beer. “They’ve got live bands on all the time and they stay up late all the time,” Costello says. “So it’s like this excellent sticky-floored bar where everyone’s sitting around smashing beers, got mullets, nobody cares, everyone’s just having the best time.”