Australia At The Royal Academy 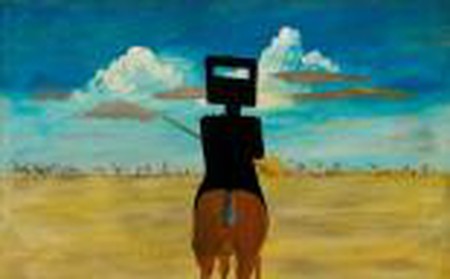 Focusing on the influence of the landscape, the upcoming exhibition Australia at the Royal Academy, taking place on the 21st September to the 8th December 2013, will celebrate more than 200 years of Australian art. This ambitious exhibition will bring together an array of works from the most important public collections in Australia, the majority of which have never been seen in the UK before. 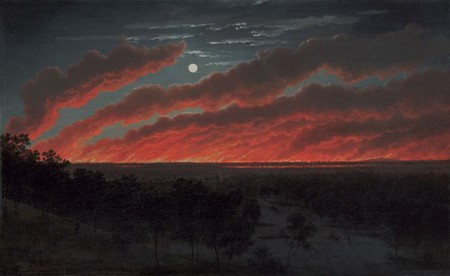 Significant exhibitions showcasing Australian art were last seen in the UK during the 1960s, at the Whitechapel Gallery and the Tate. In 1923 the RA also held a major exhibition on contemporary Australian art, but 2013’s Australia is set to be the most significant survey of Australian art ever mounted in the UK. This exhibition will present a wider range of works, from 1800 to the present day and will feature over 200 works, including paintings, drawings, photography, watercolors and multimedia. Australia is an ancient land of dramatic beauty, a source of production, enjoyment, relaxation and inspiration, yet seemingly loaded with mystery and danger. The exhibition will map the period of rapid and intense change; from the impact of the first settlers and colonization on the indigenous people to the pioneering nation building of the 19th century, through to the enterprising urbanization of the last century.

Aboriginal artworks will sit alongside the work of the first colonial settlers, immigrant artists of the 20th century and the work of some of today’s most established Australian artists. Represented artists include Gordon Bennett, Fiona Hall and Christian Thompson. Judy Watson has been commissioned to create a new sculpture for the Royal Academy’s Annenberg Courtyard that resonates with the themes of the exhibition and with the context of its British setting. Other noteworthy artists include Albert Namatjira, Frederick McCubbin, Margaret Preston, Brett Whitely and Emily Kame Kngwarreye. Here we investigate five artists to be featured, with their works brilliantly reflecting the vastness of the land and the diversity of Australia’s people. 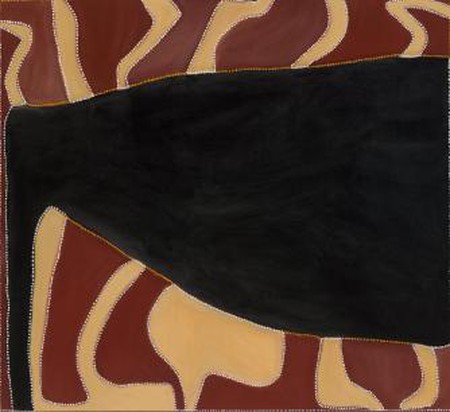 Rover Thomas is seen as one of the most influential Aboriginal artists, becoming one of the first to represent Australia at the 1990 Venice Biennale. An acclaimed cultural leader, he pioneered the East Kimberley School of ochre painting on canvas in Turkey Creek in the 1970s. Thomas began painting in his 50s, after spending 40 years as a stockman, settling at Warmun in 1975, rather than returning to his own country deep in the desert.

The infamous paintings of Thomas are characteristic for their highly textured ochre surface, minimal imagery and sense of space. A restricted palette in which black usually predominates, conveying a startling and strangely emotional intensity. Although he occasionally included figurative elements and topographical profiles in his paintings, Thomas’ work is more familiarly characterized by an aerial perspective in common with Central and Western desert art.

The featured painting Cyclone Tracy (1991) is his response to the cyclone of the same name, which had devastated Darwin the previous Christmas. Many Aborigines saw it as a sign that their culture and traditions needed strengthening and Thomas started to paint a more elaborate version of these events. The black line rising from the bottom of the painting shows the starting place of the wind, then as the line turns and widens into a large space it shows the full force of the cyclone. The yellow ochre lines running into this large black area show more winds feeding the cyclone and the red ochre portrays the wind filled with red dust. The painting is significant in being able to successfully convey an effective impression of the crescendo of the cyclone. The black area swallows the yellow ochres like a large mouth, extinguishing everything in its path. 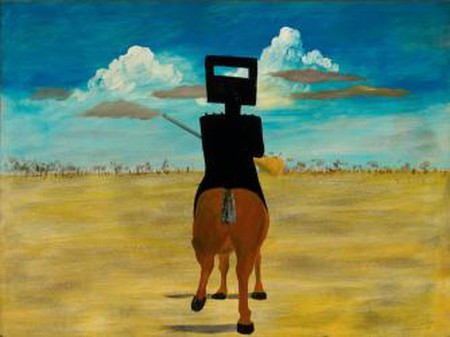 Sydney Nolan maintained a lifelong interest in the Kelly legend and periodically created new interpretations of the tale in his iconic Ned Kelly series. He produced the majority of these between 1945 and 1980, each marked by distinctly different styles. Nolan believed strongly that an understanding of landscape was central to his work, giving meaning to place, and commented that he found ‘the desire to paint the landscape involves a wish to hear more of the stories that take place in the landscape’.

The most famous of these paintings are the works in the first Kelly series, firmly fixed in the iconography of Australia’s cultural heritage. These where painted at Heide, the Melbourne home of John and Sunday Reed, between 1946 and 1947. With a fondness for complex narratives, Nolan was a keen storyteller. He interwove a range of subtexts into these paintings, as a means of broadening their implications and locating the Kelly myth within an international context of aesthetic and political discourses. At the same time much of his work is steeped in autobiographical references.

For Nolan, Kelly was an intensely compelling figure, who, in common with the artist, was of working-class Irish-Australian descendant. Not only was he a decidedly Australian subject, he held the characteristics of a tragic heroic stereotype. As Nolan’s career developed, he became inextricably associated with Kelly and behind the square black mask, Nolan’s Kelly can be revealed as an immensely complex figure whose significance reaches well beyond his native homeland. 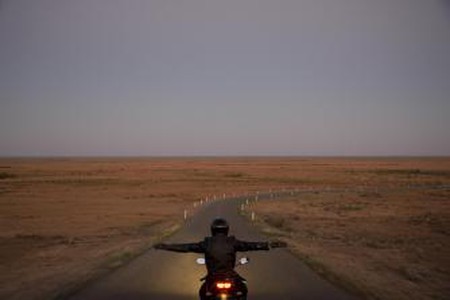 Shaun Gladwell is an artist who critically engages in personal experience through his art practice. He also explores the wider speculation upon art history and the dynamics of contemporary culture through performance, video, painting, photography and sculpture. In 2009 he represented Australia at the Venice Biennale and traveled to Afghanistan as Australia’s War Artist.

His works engage his concerns through forms of urban expression such as skateboarding, hip-hop, graffiti, BMX bike riding, break-dancing and extreme sports. His popular video projects make discursive links between historical models and an understanding of the body in space such as the flâneur and contemporary cultural figures, and experiments with certain traditional or established representational genres and concepts.

The genre of the romantic landscape and its association with traditional concepts such as the sublime is handed over to, or co-opted by, contemporary practices such as skateboarding or break dancing. However, Gladwell’s practice does not attempt to simply update nor recuperate traditional models. Rather, the popular projections of such cultural activity are both destabilized and transformed. The stylistic editing of these popular representations are resisted through the use of slow motion and ambient soundscapes. 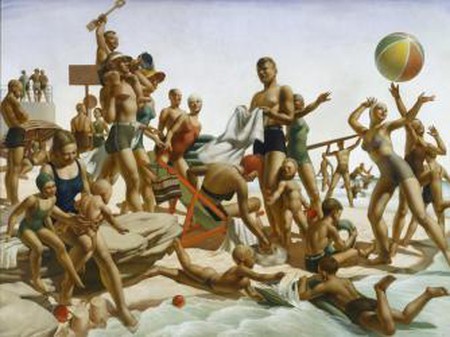 Matthew Charles Meere was born in England on 6 December 1890. After serving in World War I, Meere obtained a scholarship to the Royal College of Art in London where he studied design and mural painting. In 1933 he moved permanently to Australia and set up a commercial art and painting studio. Here he also taught figure drawing at East Sydney Technical College in the late 1930s. Instead of the existing practice of using partially clad models, Meere insisted on fully nude models in accordance with European practice. His commitment to traditional methods, not only in art training but also in his own art practice, appears to have insulated his work from the main stream of the modernist movements, thus gaining strength in Sydney.

While the greater part of his oeuvre comprises traditional still life, landscape, and portraiture, his reputation largely rests on a few works of the late 1930s and early 1940s, when Meere came into his own as an impressive creator of Art Deco style. In 1939 he began his best-known work, the highly complex Australian Beach Pattern (1940) which was exhibited in the Sulman Prize competition and with the Society of Artists in 1940, and was purchased by the Art Gallery of New South Wales in 1965.

Australian Beach Pattern has become one of the best known and most often reproduced of all paintings in the Art Gallery of New South Wales. Rich in allusion, peopled with an intricate array of monumental, idealized bodies, this compelling, enigmatic work has achieved iconic status as a representation of Australian beach life. Further notable instances of his Art Deco style are Meere’s two mural designs, Triptych (1939) and Nymphs, Hermes and Pan (1938), and Views of Dinan (1941-44). 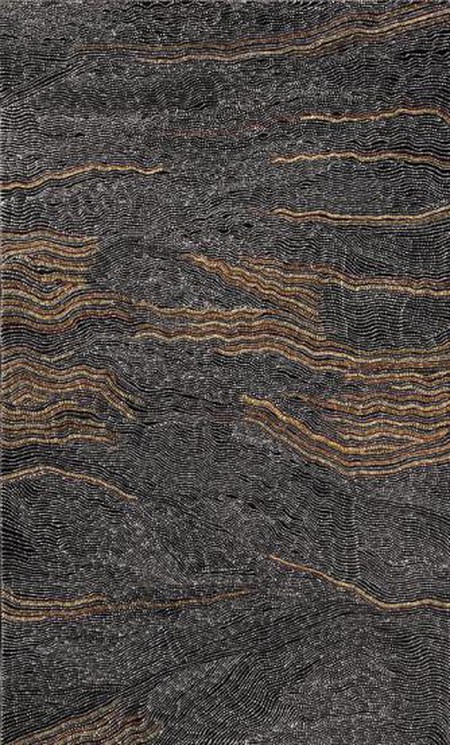 Dorothy Napangardi became the first indigenous Australian artist to have work accepted by Art Cologne in 2012. In the same year her work was also displayed in Ancestral Modern, an exhibition at the Seattle Art Museum and she was represented in the 2012 Sydney Biennale. She is celebrated for her ability to innovate, accept new challenges and reinvent herself, truly evident in her recent collaborations, including one with the luxury Italian fashion house Ermenegildo Zegna. Sadly, this show was launched on June 7 this year, almost a week after her death on the 1st June 2013.

In every one of Napangardi’s artworks, the path leads directly back to her childhood in Mina Mina. A legendarily quiet and reserved woman, she nevertheless communicated eloquently to a huge audience through her remarkable practice. Napangardi began painting in 1987, after she had moved from her home in the outback to Alice Springs. There, she enrolled at the Institute for Aboriginal Development to learn to use Western painting materials, and in 1990 began exhibiting at Gallery Gondwana in Alice Springs.

Her works explore the origins and journeys of ancestral beings in the land, and identifies the sacred spots, places in which the spirits presently reside. The Jukurrpa theme, (The Warlpiri word Jukurrpa meaning ‘dreaming’ in English) runs through these works. In the Warlpiri culture, understanding Jukurrpa insures the perpetuation of life.